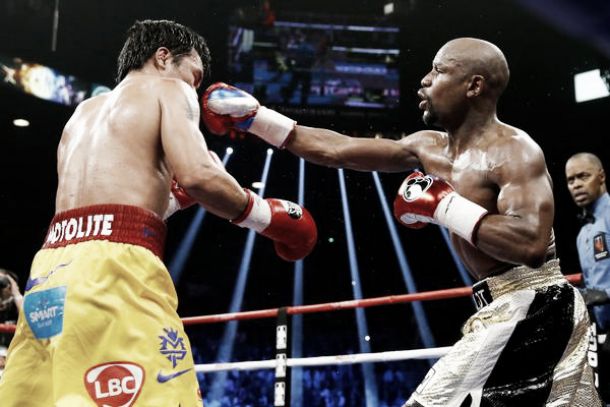 In what was built up to be the “Fight of the Century” between two boxing greats, Floyd Mayweather and Manny Pacquiao went head-to-head in a packed MGM Grand on Sunday morning.

In what was built up to be the “Fight of the Century” between two powerhouses, who had gradually stepped up to their critics over the past decade and a half, this boxing bout was eagerly-awaited for years. Floyd Mayweather against Manny Pacquiao. 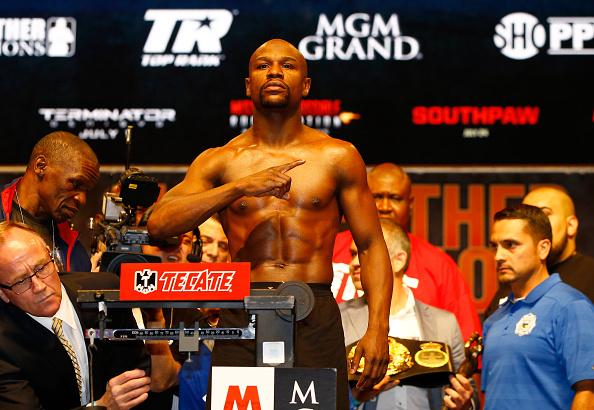 After six long years of delay and dispute over the fight, Mayweather-Pacquiao was announced to take place on the 2nd of May, and it was clearly obvious all the hype across the world would lead to an excellent, intriguing bout in truth.

Because of the time difference between America and the UK, many Europeans in general had to wake up awfully early (4am for build-up) in order to watch the fight, but that did not faze a lot of people at all. The possibility of waking up early (or staying up extremely late, in-fact) to watch what was billed to be the match of the century is something the majority of people would not think twice about doing. 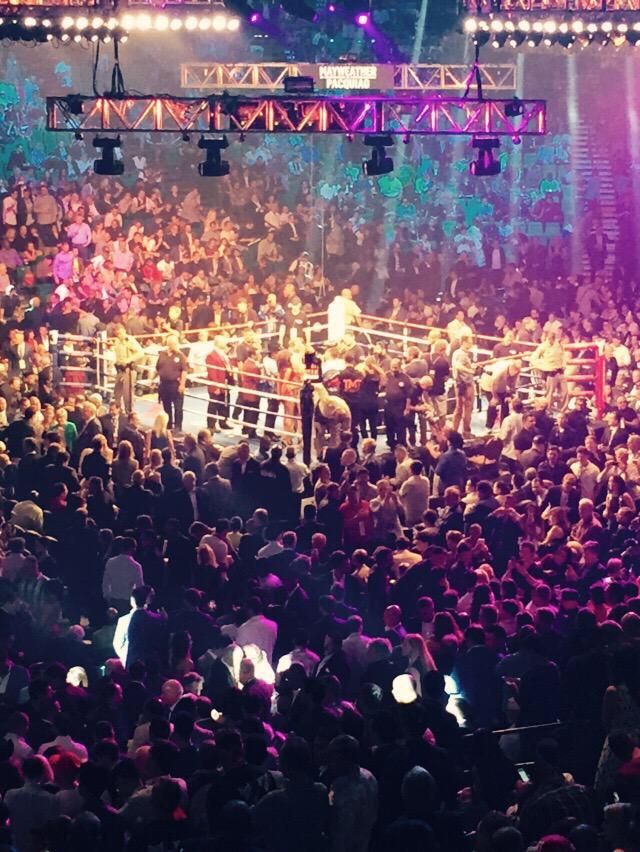 Having had to wait six years for the fight to materialise, you would have thought the media and public alike would have been slightly more patient and understanding, as the fight was delayed. Reports suggested cable companies, and PPV sites across the world had struggled to keep up with the demand, so they collectively decided to delay the start of the match to accomodate.

As the bout began…

Mayweather started off the better out of the two fighters, enjoying spells of power and brute force in Round one, and replicated the same in the second. Pacquiao seemed to have a defensive mindset from the offset, and looked fairly bruised from the early punches suffered in the first six minutes, with a tense atmosphere around the Arena.

In the third and fourth, Pacquiao started to assert himself in the bout, eventually taking advantage of Mayweather backing up into corners with smart jabs to the face and various body parts. Floyd had initially done well to dodge and evade the Filipino’s advances early on, but with the crowd exploding, the intensity increased and he was unable to stop the 36-year-old completely. 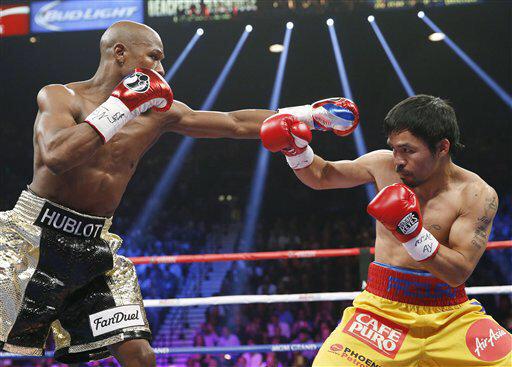 Floyd (pictured, left) attempts a left hook in one of the earlier rounds, with the Pac-Man focused on blocking his effort.

The scoreboard showed Mayweather was in the lead over the first three rounds, but Pacquiao pulled off a stunning right hook in the fourth, suggesting he had won that round and found himself back in the bout. 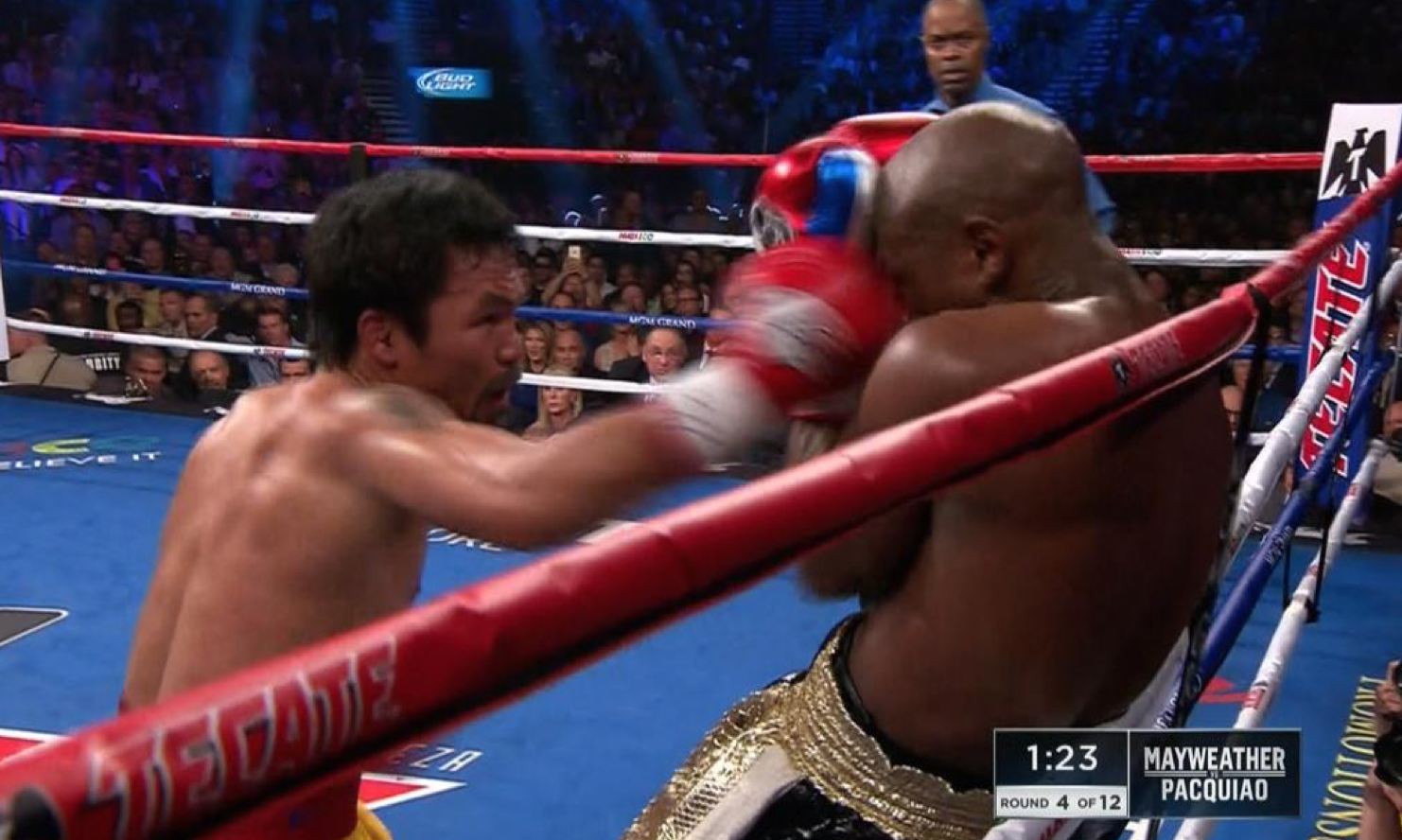 Blockbuster hit: Pacquiao was a pedestrian for the majority of the first three rounds, but asserted his own power in the fourth

The bout continued in the same vein, with Mayweather comfortably avoiding the advances of Pacquiao in the fifth round, but had to make a mighty effort in order to block the Filipino throughout the sixth. Floyd continued to step back into the corners, and Manny saw his chance. He unloaded with a succession of punches, but Mayweather mouthed “nope” and blocked each one. Despite the arrogant nature of his word, Mayweather seemed to have a tactical game-plan and was sticking to it.

Pacquiao on the other hand, was using up all of his energy with quick bursts of punches, but didn’t land many of them. In round seven and eight, Mayweather had to be alert again to make some swift dodges and avoid his opponent’s advances, and did so with an efficient nature to his bow.

Round nine and ten, Mayweather continued to assert his dominance with a few crucial blows adminstered to the Filipino’s face, landing them with a precise angle. By the end of round ten, Pacquiao had looked as though he was in a war, and Floyd was doing well to fight off his advances once more.

In round eleven, the clock was ticking, and Mayweather piled on the pressure. With a round or so left to contest, it was evident to see that Pacquiao simply had to knock the experienced American out, if he had any real chance of winning anymore. Mayweather was dictating the whole flow of the fight, dodging with ease and slowing down his opponent with composure and an air of comfortability about the whole bout – as though the magnitude of the match had not fazed him at all.

With the last round left, Mayweather knew he had the fight virtually in his hands. He kept a relaxed stance and ushered Pacquiao towards him, but by this time, had his opponent right where he wanted him. With a minute or so left on the clock, the fans started booing Floyd, perhaps as they realised he was on the verge of winning such a big fight, but also because Pacquiao’s threats were quelled effectively, and he couldn’t do anything else.

After the final bell rang, Mayweather went on his lap of honour. He knew he’d secured the victory, and unless there was a controversial judges’ decision, he’d have kept his unbeaten record in-tact, moving to 48-0-0 ahead of his final bout in September before he retires from the sport. The scoreboards were: 118-110, 118-110 and 116-112 (all in Floyd’s favour), meaning he was victorious.

A boxing masterclass from Mayweather, who controlled the tempo of the fight from start to fight. Pacquiao gave it all he had, but it just was not good enough, against a man who might finally be recognised as the greatest of his generation now. Many would have liked to have seen a closer bout in truth, but it was a fascinating watch and the better man prevailed in the end.

Floyd Mayweather: “I want to thank God for this victory. I want to thank all the fans that came and those around the world. He’s a hell of a fighter. Now I see why he is one of the guys at the pinnacle of the sport of boxing. I knew he was going to push me. He had moments in the fight but I kept him on the outside, I was a smart fighter I out-boxed him. We did what we had to do tonight, I’m truly blessed.

When the history books are written, it was worth the wait. My last fight is in September and then it’s time for me to hang it up.”

Manny Pacquiao: “It’s a good fight, I thought I won. He didn’t do nothing, just moved outside. I got him many times – I think I won the fight. He is moving around and it’s not easy to throw a lot of punches if your opponent moves around. I can handle his power, it’s not strong like other opponents. It’s not about size – I’ve been fighting bigger than him and it’s not a problem.”