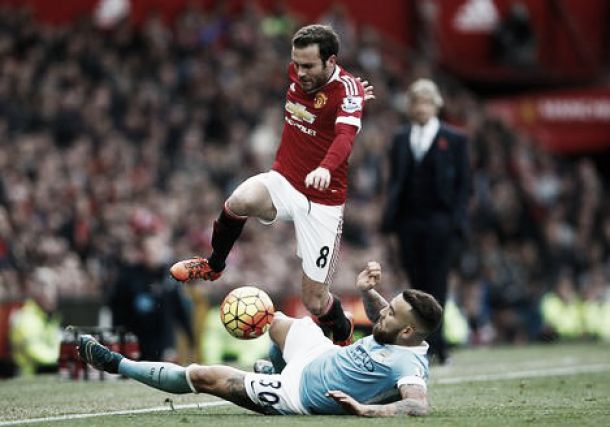 After all of the pre-match hype, the 170th installment of the Manchester Derby ended in a nervy goalless draw at Old Trafford – with both sides staying firm defensively.

It seemed typical that after all of the pre-match build-up, excitement, and analysis ahead of kick-off at Old Trafford, it’d finish with a goalless draw between the noisy neighbours of Manchester. Even so, although this was true, neither side played particularly badly – it was more credit given towards both defences in particular, who stayed firm in the presence of frequent attacking pressure to keep a hard-fought clean sheet.

Argentinian duo Marcos Rojo and Nicolas Otámendi were two of the standout performers for their respective clubs, the latter of which was making his Derby debut, covered himself in plenty of glory with a no-nonsense, excellent defensive display to help Joe Hart keep his 100th Premier League clean sheet.

Even with both Sergio Agüero and David Silva out of contention to feature, Manchester City fielded a strong side regardless. Manuel Pellegrini made three changes to the squad who came from behind to steal all three points against Sevilla on Wednesday in the Champions League – club captain Vincent Kompany was back in the starting XI for the first time in over a month, whilst Fernando and Aleksandar Kolarov were both included too.

Jesús Navas dropped to the substitutes’ bench – much to the quiet relief of the visiting supporters – whilst Yaya Touré was deployed in a more attacking role with Kevin de Bruyne and Raheem Sterlingon either flank.

As for Manchester United, Louis van Gaal had the luxury of being able to choose from a virtually fully-strengthened side. Luke Shaw (leg) and Paddy McNair (liver) were the only two players sidelined with their respective injuries – and the latter probably wouldn’t have featured in fairness.

As the intriguing clash got underway, it soon became apparent that the hosts were on top in the early stages, and certainly fed off the energy from the home supporters – willing their team on to try and secure bragging rights for another day.

They struggled to make the most of their possession though, and despite a few advances towards goal, it was actually the sky Blueswho had the first half-chance on-goal. After some intelligent interplay between Fernandinho and Sterling, the latter weaved his way past two challenges in the box before trying his luck – but his effort took a deflection and swerved away from goal with David de Gea relatively untroubled.

Martial a tricky threat to deal with

Anthony Martial was a problem for City to deal with, and the 19-year-old weaved his magic on the flank upon occasion too. It was great work from the young Frenchman to speed down the flank, dribble past his marker and unselfishly square the ball into the path of teammate Juan Mata – who dithered in possession just enough to allow the visitors’ a chance to get back into their defensive shape – having been hit on the counter – and his attempted ball was cut out effectively.

You could almost hear the collective groans from the Old Trafford faithful as the half went on, they were understandably frustrated their side had failed to make the most of their half-chances to create an opportunity to score.

Ideas were there – execution, not so much

This feeling was echoed even further in the 37th minute whenWayne Rooney swatted Bacary Sagna out of his path like a fly before driving towards the box with Martial calling for the ball on his left. He took an extra touch before releasing the ball, and that was enough to put Martial off continuing his run, evidently assuming the 30-year-old would go for goal himself.

The idea was certainly there, but the execution, not so much. It could have easily been one-nil to City at the interval too – but Yaya Touré watched on in agony as his looping header flashed narrowly wide of de Gea’s near post from a de Bruyne corner-kick.

As the second-half began, neither side made any alterations, with both bosses eager to keep their relative teams the same, trying to see if they could improve in the second 45. United probably should have broken the deadlock just five minutes afterwards, at the end of a quick passing move, but another deflection thwarted Ander Herrera‘s strike from the edge of the area.

Just a minute later, penalty appeals were waved away by refereeMark Clattenburg – as Herrera went down under the suspected challenge from Sterling, although replays showed it would have been a soft spot-kick, in fairness. Chris Smalling saw his headed effort trickle narrowly wide of Hart’s far post, with plenty of home supporters getting ready to celebrate the opener, but it wasn’t to be.

Otámendi made an important interception to deny Rooney with a one-on-one opportunity in the box on the hour mark, just a minute before Hart was called into action to stop Mata with a perfectly-timed challenge as the ball broke free from an innocuous sliding interception in midfield.

Alterations highlighted the varying tactics as the clock ticked down

The inclusion of Jesse Lingard and Marouane Fellaini sparked new life in United going forward, as they nervously edged closer towards a winner. The same couldn’t really be said for Pellegrini’s side – as Navas was particularly ineffective whilst Martin Demichelis was deployed in a midfield role to nullify United’s prominence in that area of the field. Kelechi Iheanacho was introduced into the fray, but it was too late for the talented young Nigerian to really create anything of note, apart from a few neat touches here-and-there.

City looked dangerous on the counter, and United were constantly weary that their local rivals could, and probably would, steal a late strike at some point. Lingard though, came closest to breaking the deadlock with a few minutes remaining. After being released with a teasing lofted ball by Martial, the 22-year-old chipped a helpless Hart, but his goal-bound effort rattled off the crossbar and the Citizens were handed a lifeline.

If not for the presence of Wayne Rooney at the far post, they would have taken it, too. A searching delivery was fizzed into the box by Kolarov from the left-hand side, and Otámendi was an inch or two away from latching onto the ball – which would have almost certainly resulted in the opening goal. Instead, the experienced Englishman was alert to the danger and got his body in-behind the Argentine, making sure he got tight to him, stopping him in his tracks rather dramatically.

There was time for one final push, and Joe Hart made a fantastic diving stop to his left to deny Smalling from becoming a Derby day hero – after his low strike was seemingly destined for the bottom corner, but England’s number one had other ideas, making sure his clean sheet was intact.

Manchester Derby, a goalless draw. It fails to tell the whole story, though.