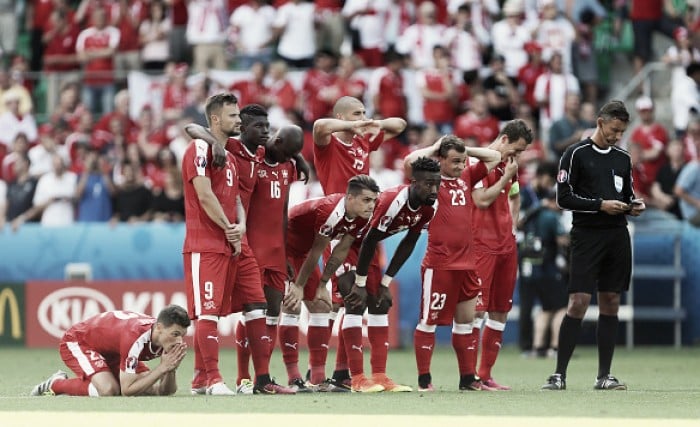 Post-match reaction from Stoke’s Xherdan Shaqiri – who scored a brilliant bicycle kick to take the game to extra time, but his attacking team-mates failed to take their chances and Switzerland have been punished for it with penalty heartbreak.

Switzerland managed to squander a hatful of promising opportunities in-front of goal, and as a result, succumbed to a narrow defeat after extra time and penalties in Saint-Etienne. Arsenal‘s £30million pound signing Granit Xhaka was effective and efficient in possession as usual, but fired his spot-kick wide of Lukasz Fabianski‘s far post, missing the only penalty in an otherwise tense shootout.

Unsurprisingly, the media have had a field day with suggestions that he’s a perfect player for the Gunners considering he failed to convert under pressure – but the 23-year-old was excellent throughout the tournament and made little fuss in a defensive-minded midfield position.

Stoke‘s Xherdan Shaqiri, who scored a brilliant bicycle kick late in the second-half, had the following to say about his compatriot at the final whistle.

“He’s disappointed, but that’s football and mistakes can happen. I think Granit is very professional and he can cope with it – he will stand up again.”

Shaqiri won the Man of the Match award after his excellent equaliser – combined with a genuinely tireless attacking display, but in the end his personal triumph meant nothing for Switzerland as a whole.

Vladimir Petkovic‘s side were seen as one of the tournament’s dark horses alongside Croatia going into the competition itself, and the defeat was a disappointing one considering the chances that went amiss. Substitute Eren Derdiyok squandered two opportunities late on whilst Haris Seferovic was seemingly anonymous in attack and regular fouls meant the game wasn’t in a free-flowing position for the most part.

Shaqiri said the team as a whole are “very disappointed”, especially in the knowledge that they could’ve achieved “something very big”. It’s something they “have to learn” from the loss itself, especially considering it’s the same situation they experienced against Argentina in the 2014 World Cup.

“We gave 150 per cent and we would have deserved to advance, but penalties are 50/50 and that’s football.”