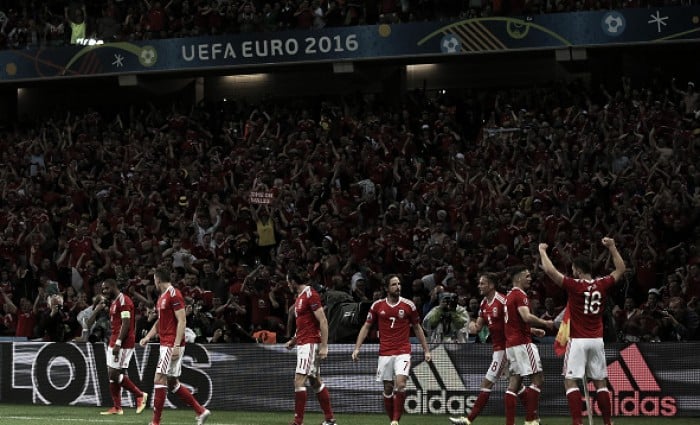 Based on the opening exchanges, it seemed as though it was Belgium who were going to prevail. Tenacious out of possession and equally dangerous in the final third, they came narrowly close to breaking the deadlock within ten minutes – but for some brave defending after an initial sharp stop from Crystal Palace goalkeeper Wayne Hennessey. He was off his line quickly and thwarted Yannick Carrasco from close-range, before Thomas Meunier and Eden Hazard both had efforts blocked off-the-line by the Welsh backline.

Everton‘s Romelu Lukaku was inches away from opening the scoring as he was left unmarked from the resulting corner-kick, before an excellent strike from Roma midfielder Radja Nainggolan gave the Belgians their reward for patient, probing play in the early minutes. His strike flew goalwards and Hennessey’s dive was ultimately in vain as the effort from range arrowed toward the top corner with aplong.

Ben Davies was booked after just five minutes for a cynical challenge, and his defensive-minded team-mate James Chester was also booked shortly after the opener – it was clear that Chris Coleman‘s side were getting frustrated. Jason Denayer relished his physical battle with Hal Robson-Kanu and frequently won it too: meaning Gareth Bale took matters into his own hands and tried to drive forward from deep positions. They kept the ball well, had good spells of possession but Belgium were efficient in keeping their opponents at an arm’s length away from Thibaut Courtois‘ goal for the most part.

Tensions continued to rise as the foul count increased – Chris Gunter was booked for a deliberate bodycheck on Manchester City‘s Kevin de Bruyne, before Hazard almost got himself into trouble for dissent after throwing the ball away. Nainggolan’s appeals for a free-kick were waved away by referee Damir Skomina, and just seconds later Wales could’ve levelled the scoring. As they had possession in the final third, Ramsey did well to beat his marker and find a low ball in the area for the on-rushing Neil Taylor – whose effort was thwarted by a fantastic Courtois diving save to keep Belgium ahead.

However, pendulum swings back in Wales’ favour

Despite looking promising in the early going, Belgium had their own weakness – struggling from set-pieces. Wales managed to stay patient, and eventually grabbed their reward just after the half-hour mark.

A corner-kick was swung into the area from the right by Arsenal midfielder Aaron Ramsey, and it seemed inevitable that captain Ashley Williams – who passed a late fitness test the day before – would be the man presented with a golden opportunity to score. As he’d done twice in the Premier League this year already (against Watford in January, Arsenal in March), he headed home to level the scoring at a crucial time.

Both sides looked threatening on the counter-attack, with Bale coming close whilst Belgium’s backline were asked all sorts of questions as they managed to leave Williams unmarked for a second consecutive time when another corner-kick was fizzed into the area. With the notable absences of both Jan Vertonghen and captain Vincent Kompany through injury, as well as Thomas Vermaelen (suspension), it was evident they were lacking height and a towering presence in the air.

Plenty left for both teams to create

As the referee blew his whistle for half-time, it was clear that both sides still had work to do.

So as the two teams emerged from the tunnel 15 minutes later, it was a slight surprise to see Manchester United‘s Marouane Fellaini being introduced into the fray. Having started their defeat against Italy in the group stages, Belgium have looked impressive without the towering midfielder in the starting XI, but he replaced Carrasco – who was relatively ineffective as he didn’t see enough of the ball.

Belgium started the second 45 the same way they began the match itself, but ended up rueing their missed chances shortly afterward. Meunier delivered two inviting crosses in quick succession toward the box, both of which were squandered by Lukaku as Wales continued to defend convincingly.

Robson-Kanu was rewarded for his tenacious work both out of possession and with the ball, as he netted a well-taken goal to crank up the pressure on Belgium and send Welsh fans into sheer delirium. Having been found in the box with a purposeful pass forward by Ramsey, he found himself in a dangerous area with plenty to do – until his Cruyff turn left two defenders in his wake and he slotted his strike into the bottom corner from close-range.

Tensions rise as time ticks down

Eden Hazard cut an increasingly isolated figure – the opposite to his excellent display against Hungary in the previous round – whilst de Bruyne showed flashes of his individual brilliance, although the ball was infrequently being played toward his path.

Fellaini had a great chance to level the scoring after Toby Alderweireld‘s cross was swung goalward – but his headed effort flashed inches wide of Hennessey’s far post as time continued to tick down and tension (for both teams, naturally) kept rising. Ramsey was booked for a handball and you could tell by his reaction that he knew the ramifications of his latest booking – missing the semi-final through suspension, provided Wales progressed into the last-four.

The referee’s decision-making came into question on more than one occasion as the match entered the latter stages – first Lukaku’s protests for a freekick were waved away, then Nainggolan was denied a penalty after going down from a Williams tackle in the box.

Belgium were running out of ideas, and rapidly doing so. With Robson-Kanu receiving a warm round of applause as he was substituted, Burnley’s Sam Vokes came into the fray. Just six minutes later, he scored to all-but-seal Wales’ progress into the semi-finals. Having been fed through by Gunter, whose lofted ball into the area initially seemed like a time-wasting tactic, Vokes made no mistake with his chance as he slammed a header past Courtois – watching on as the effort nestled into the back of the net.

The fourth official signalled for three minutes of stoppage time on his electronic board, and despite Belgium’s best efforts, Wales remained firm defensively and sealed a fantastic victory. After a performance like this, they’ll relish playing Portugal in Lyon on Wednesday.