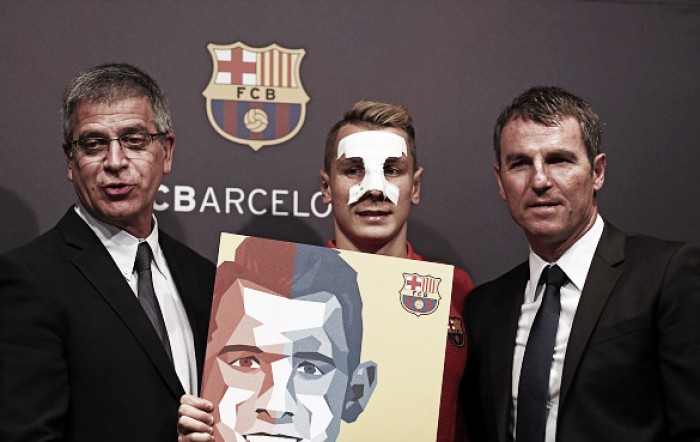 The talented 22-year-old fullback, who has signed on a five-year contract deal, has said he’s delighted to be joining the Spanish champions – and says it’s the perfect place for him to continue developing.

Barcelona’s new defensive addition, Lucas Digne, has publicly stated his delight after officially sealing his £14million pound move from Paris Saint-Germain on Wednesday afternoon. Having spent last season out on-loan with Serie A side Roma, the 22-year-old left-back joined Luis Enrique‘s side with the transfer set to rise to around £17m depending on performance and appearance-related bonuses.

They already pulled off a shrewd coup to sign Lyon‘s Samuel Umtiti midway through this summer’s European Championships – and it seems that Barça are intent on maintaining their defensive stability in the long-term. Digne told reporters during his official unveiling that he “hopes” to be at the club for “many years”, not only because it’s the “perfect place” to progress but he’s “happy about serving the best club in the world.”

Digne was included in Deschamps’ France squad for this summer’s Euros – but didn’t feature throughout. | Photo: Getty

It is believed that he has been signed as competition with Jordi Alba for the left-back berth, and Digne also said his style of play “corresponds” with that of his new team. Explaining what he meant, he said he fits in well with the idea of “attacking a lot”, as well as being able to “recover the ball high up the pitch.”

“I like to attack, but I know that a modern full-back must also defend and I’ve improved a lot in that aspect.” He also spoke about the beneficial impact that playing alongside stars such as the deadly attacking trio of Lionel Messi, Luis Súarez and Neymar will have on him at the Camp Nou.

“I’m young and I want to improve and work every day to reach the very top – I’ll train all I can to prove that when the coach needs me, I’ll be there.”