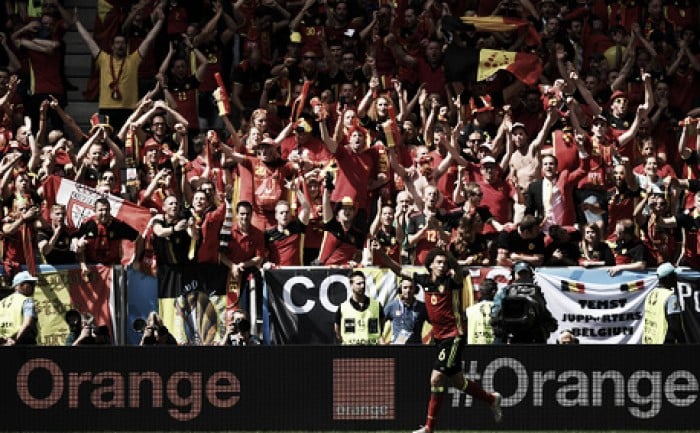 Mircea Lucescu has publicly confirmed the Belgian midfielder has two offers from England, as well as two from Italy as speculation continues to rumble on about his future.

Zenit St. Petersburg midfielder Axel Witsel has four offers to choose from, as speculation over the 27-year-old’s future continues to overshadow Zenit’s first-team plans ahead of their upcoming fixture against Lokomotiv Moscow in the first game of their league season next week.

Witsel, who represented Belgium during this summer’s European Championships, joined Andre Villas Boas‘ side four years ago, in what was a surprising transfer from Portuguese giants Benfica.

Witsel’s father has met with Napoli

Axel’s father Thierry confirmed that he met with Serie A side Napoli this month, but Merseyside rivals Everton and Liverpool were also reportedly interested in securing his services.

Witsel, who has made 71 international appearances, is one of Zenit’s best and most important players – so there’s no surprise his reported price tag is a hefty one.

With that being said though, Everton are reportedly ahead in the race to sign Witsel. A fee in the region of £25million pounds would be enough to sign the Belgian, with the Toffees’ new manager Ronald Koeman eager to bulk up his first-team squad with more high-quality players ahead of the Premier League campaign in the middle of August.

He’s eager to keep the likes of Ross Barkley and Witsel’s compatriot Romelu Lukaku past this summer window – and although John Stones seems set for a big-money switch to Manchester City, the acquisition would be a signal of intent for a side aiming to maintain consistency in their hunt for European football after a forgettable season last time out under Roberto Martinez, who was sacked in May.

Lucescu had the following to say about the whole situation:

“He has spoken with the club, and has asked to leave. [We] placed a high valuation on him because he is an important player, one of international level.”

He’s got 12 months left on his current contract, meaning Zenit are eager to cash in on him now whilst they can still command a fair transfer fee for Witsel – as well as making sure they don’t stand in his way to strain relations between himself and the club.