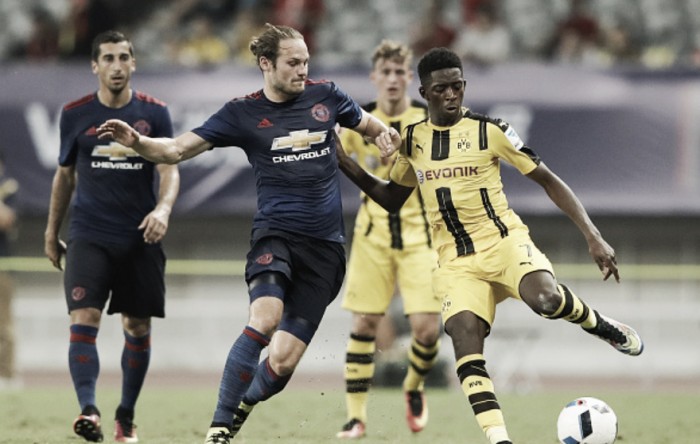 Borussia Dortmund manager Thomas Tuchel has publicly praised winger Ousmane Dembélé after the French teenager’s fantastic start to life with the Bundesliga side.

Despite reports linking him with a move to the Premier League, Ousmane Dembélé made the decision to join Bundesliga side Borussia Dortmund for a transfer fee in the region of £12.5million pounds – and hasn’t looked back since.

The 19-year-old winger, who netted twelve goals and created five assists in Ligue 1 last season with Rennes, definitely caught the eye of many European scouts before joining BVB officially at the start of July.

Dembéle’s efforts in training have not gone unnoticed

Since then, he has been involved in pre-season training with the rest of the first-team squad and his new manager Thomas Tuchel has made public his praise for the versatile winger – who can play on either wing, as well as being able to operate as an attacking midfielder.

He caught the eye with an excellent solo goal against José Mourinho’s Manchester United side in the International Champions Cup pre-season tournament, and also netted against German outfit Erkenschwick.

As quoted by German newspaper Bild, Tuchel said the forward is “really fresh” and also has “great dribbling skills”, not least alongside his ability to use both feet well.

“He can do anything – pass and set up one of his team-mates, but he can also take on his direct opponent with one of his dribbles. Plus he can play in a number of different positions.”

Dembélé will be hoping he can break into the first-team ahead of the forthcoming campaign, especially with all of the side’s summer acquisitions. He’s one of four teenagers in the senior side and Tuchel has made a number of improvements to his squad with notable absences taken into account – including Mats Hummels and Ilkay Gundogan.

If he continues to impress, there’s no reason why he cannot assert himself as a starter with Dortmund’s first fixture of the 2016/17 Bundesliga season up against FSV Mainz 05 on the final week of August. Before then, they’ve got a Supercup and Pokal first round match to contest, against rivals Bayern Munich and Eintracht Trier respectively.