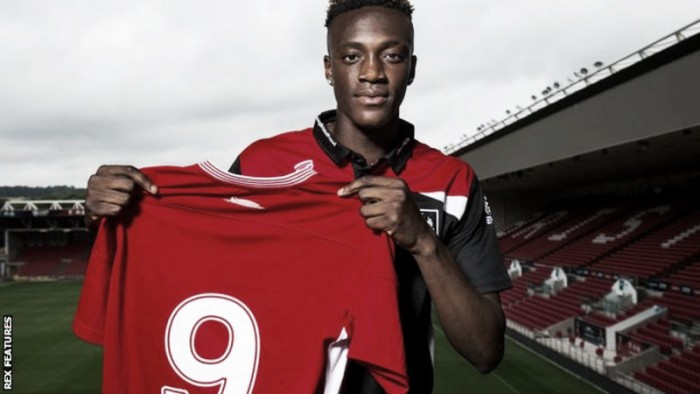 The talented forward, 18, has joined the Championship side hoping for regular minutes in a competitive environment after flourishing at various youth levels with Chelsea last season.

Chelsea striker Tammy Abraham has completed a move to join Championship side Bristol City on a season-long loan deal. A number of clubs in England’s second tier were interested in signing the teenager, but he has agreed terms and will be playing his football with the Robins for the forthcoming season.

The 18-year-old forward, who was instrumental in helping the u19’s secure both the UEFA Youth League and FA Youth Cup trophies for a successive season, made his Premier League debut in a cameo appearance against Liverpool at Anfield. He featured for a longer period against Premier League champions Leicester City in the Blues’ final fixture of the campaign, a 1-1 draw.

Kasey Palmer has already joined Championship counterparts Huddersfield Town, whilst a few more talented youngsters are expected to leave Stamford Bridge on loan spells before the end of August. Isaiah Brown and Dominic Solanke, both of which were on-loan at Vitesse Arnhem in the Eredivisie last season, have not been given first-team assurances of yet and are expected to also leave on loan spells too.

Tammy could feature from offset

Bristol’s Championship campaign gets underway with a home clash against Wigan Athletic in one of Saturday’s 3pm kick-off’s, and Abraham is expected to be included in the matchday squad after a successful pre-season with both Chelsea and the England U19‘s, before the latter were knocked out at the semi-final stage with a 2-1 defeat against runners-up Italy in this summer’s European Championships.

Tammy (on the ball) in action for England against the Netherlands at this summer’s U19 European Championships. | Photo: Getty

He’s expected to battle with new acquisition Lee Tomlin and Kieran Agard for a starting spot in attack alongside Jonathan Kodjia – who netted 18 goals and created three in the league last season.

Manager Lee Johnson told the club’s official website that Tammy has a “very bright future” in the game, and the fact he’s “a top class player” means all at the club are delighted to have secured his services for twelve months.

There is no standard recall, and he admitted they’ve been “chasing” him for a long time, but remained patient to avoid potential disappointment if he opted for a different side in the same league.

“We’re very grateful to Chelsea and [manager] Antonio Conte for allowing one of England’s bright young talents to join us and we’re now able to give him the chance to showcase himself in the Championship.”