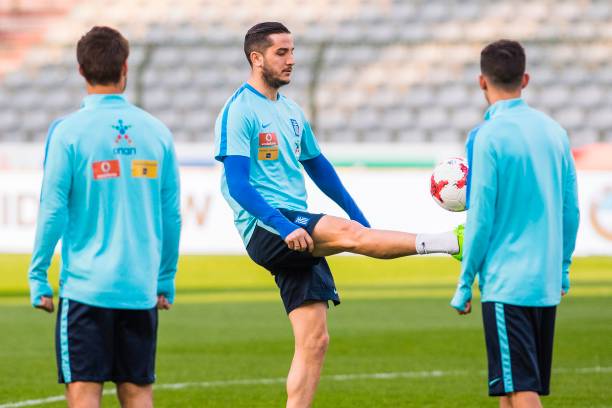 Arsenal, Chelsea, Inter, Liverpool and Manchester United. Just a few sides who have been monitoring the Greek international’s progress in Italy, but why?

Judging by the way Manolas has been performing recently, it seems just a matter of time before he gets a big-money move to the Premier League.

Manolas, 25, has a contract with Roma until 2019 but his agent has recently hinted that the two parties are currently weighing up their options with regards to his future.

Manolas almost caused a four-team tug-of-war for his services in England last summer.

So why is Manolas so highly rated? What makes him so good?

His ability to read the game in a variety of situations and adapt accordingly are impressive.

Quick transitions from attack to defence can often catch defenders unaware, but the Greece international has spatial awareness and tenacity in physical challenges. As a result, he’s tough to beat in one-on-one duels for possession in the final third.

Sharp turns in different directions and well-timed sliding tackles lead to a Roma breakaway. He’s able to alleviate pressure on team-mates by using his pace to good effect, in a similar way to that of Napoli’s Kalidou Kouliably.

Manolas is unafraid when attackers eagerly pursue him in possession, using his strength and awareness to good effect – shrugging them away as he looks to distribute possession further forward and create a potential chance. (Photo: Getty Images)

He’s unafraid to make last-ditch interventions and important challenges. Composure on the ball is becoming an increasingly important skill of for centre-backs and Manolas’s confidence allows him to drive forward on a mazey dribbles or marauding runs as if he’s an attack-minded fullback.

Despite all of his strengths, there are still some areas where he needs improvement. Manolas is very one-footed and as a result can be exposed on his weaker side defensively.

His brave nature when defending can lead to a lack of judgement or a rash challenges at times, where he is too eager to dispossess and doesn’t come away with the ball. This has often been the case against tricky opposition with a few shaky moments, such as in fixtures against Inter Milan and their Europa League first leg tie at Lyon recently.

With 10 bookings (all comps) this term, his discipline needs improving to avoid a untimely suspensions.

Questions over his suitability for a league with a higher intensity than Serie A will continue to be asked given his ball-playing tendencies.

It’s important that Manolas fully concentrates on what’s ahead from a Roma perspective.

Signed from Olympiakos in August of 2014, his progression has been evident but the hard work doesn’t stop here. What will separate him from the rest is his attitude to working hard and continuing his development.

It’s evident that Roma want to keep hold of their man unless he demands a move elsewhere. At 25, there’s still plenty of time for him to progress, and he’s not yet in the world-class bracket: but could easily be there in a few years’ time.

Unless a club comes in with an offer that Roma simply cannot refuse, there’s no reason why Manolas cannot remain there beyond the end of the current campaign.

Stability will prove beneficial on a personal level for him too, as will avoiding the pressures of a new country and language so soon after establishing himself in Italy.