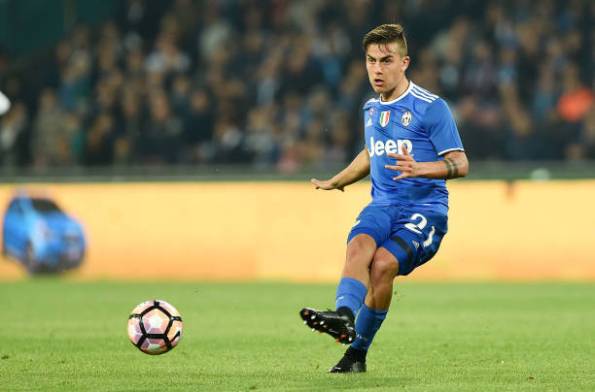 From a highly-rated wonderkid at Palermo to a fan favourite at Juventus, it’s fair to say that Paulo Dybala is excelling under Massimiliano Allegri’s guidance.

The 23-year-old forward can play in a variety of positions across the frontline. As Juve’s driving force, his partnership with compatriot Gonzalo Higuaín this term has been deadly. Somewhere in another universe, the duo are pulling on the red and white of Arsenal instead.

A tricky player to shift off the ball, Dybala is tireless both in and out of possession. His admirable workrate mean defenders are constantly on edge wherever he’s around, and he anticipates potential situations seconds before others realise the potential danger.

MARCH 14, 2017: Juventus’ forward Dybala (L) vies with Porto midfielder Yacine Brahimi during the Champions League clash between the two sides in the last-16 of the competition.

High levels of agility and composure allow him to drive forward with the ball to an extent where he effortlessly dribbles with pace for sustained periods.

His solo runs against Torino and Cagliari this term are just two prime examples of this. Being unafraid to shoot, whether that be inside the box or outside the area, he is troublesome for defenders in a variety of ways.

Dybala’s technique and spatial awareness mean he’s able to find positions in space regularly to create goal-scoring opportunities: either for himself or for players like Higuaín, who have been feeding off his high energy, deft service and scoring for fun.

Attacking statistics in Serie A this term (source: Squawka):

Given his small frame, his main weakness which needs improving is his ability to battle in aerial duels. He’s only won 16.7% of his challenges in the air this term, which is underwhelming to say the least.

Despite his ability to dribble quickly, his tricky style also  means that he draws fouls regularly, increasing the likelihood of him sustaining injury.

With all of his strengths taken into account, it’s unsurprising that many have compared him to Lionel Messi. Widely regarded as the world’s best, Dybala has recently been tipped to join Messi at the Nou Camp.

He’s still only 23 and continues to develop in an ever-improving Juventus side. Whether he sees his long-term future with the Bianconeri remains to be seen, but watching his progression will be intriguing.