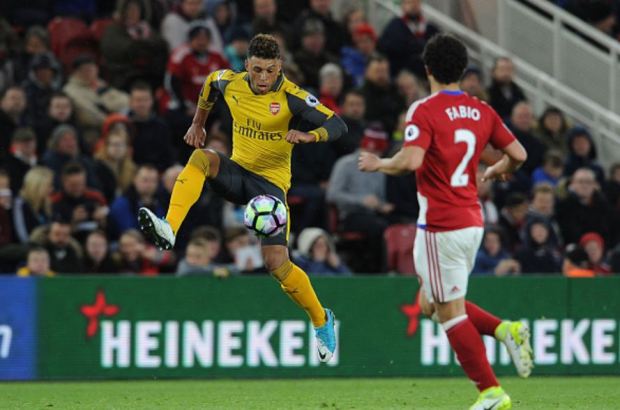 In my match preview, I stressed the importance of Alex Oxlade-Chamberlain starting against Middlesbrough. He didn’t disappoint.

Playing in an unfamiliar role at right wing-back, the tactical decision made sense to an extent. Arsene Wenger wanted to make full use of the Ox’s physical attributes whilst smartly keeping Hector Bellerín out of the firing line, given his recent form.

A booking four minutes in was harsh after a late challenge on the advancing Fabio, but just reinforced the fact that he had to be careful when tackling, timing challenges to perfection for the remainder of the match and you would have worried about the possibility of him picking up a second yellow.

Just like he did when playing at right-back against Manchester United earlier this season, he maintained the balance between defence and attack to good effect. In the first 45 alone, he completed seven recoveries, four clearances and maintained 85% passing accuracy.

Alex was effective on the attack too – completing five dribbles and was fouled on two occasions as Boro struggled to deal with his threat throughout. (Picture source: Peter Haygarth / Getty Images)

It was all too easy and stemmed from Sanchez losing possession cheaply, before Monreal was exposed once more and Stewart Downing’s delivery into the area caused all sorts of problems for Koscielny to deal with. The Ox was too high up the pitch on the opposite side and couldn’t have done much in support.

Isolated regularly when Arsenal advanced on the left-hand side, he provided attacking width but had to remain patient at times. Importantly, he was disciplined and did well to hold his position during situations where he could’ve easily left gaps for the hosts to exploit. His blistering acceleration proved pivotal in helping to make a crucial tackle and clearance, dispossessing Gaston Ramirez as he broke through on-goal.

After Özil restored Arsenal’s slender advantage, the Ox had more confidence to go forward regularly in the latter stages. His direct running was a constant threat as usual but his final ball lacked consistency when it mattered at times, otherwise he would’ve easily got himself a few assists on the evening.

He was tireless and persistent in his efforts to make a notable contribution in the match, coming close late on but seeing his shot from close-range cannon off the side netting.

After the full-time whistle had blown, a collective sigh of relief was exhaled. A much-needed victory and one where the Ox adapted well given the circumstances, as one of Arsenal’s best performers on a testing evening.