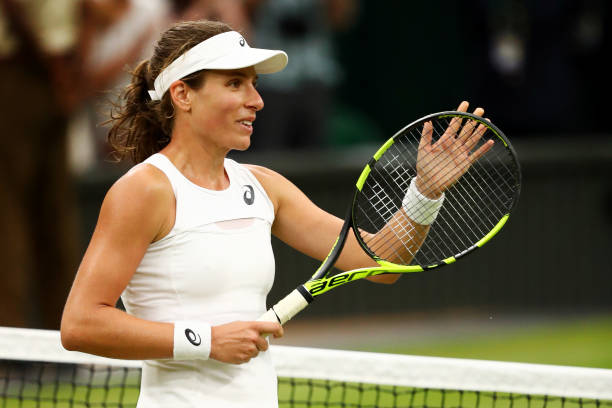 Johanna Konta is into the semi-finals of this year’s Wimbledon tournament after a 6-7, 7-6, 6-4 victory over number two seed Simona Halep yesterday evening in a thrilling encounter.

Having beaten Caroline Garcia only 24 hours before in the round-of-16, it was always going to be a grind for the 26-year-old.

This was made even harder by the fact that Halep, who has been twice defeated in Grand Slam finals and previously got to the semis at SW19 three years ago, posed a variety of threats.

That was emphasised by the first point, where she wrongfooted Konta with consummate ease. But alas, the roar was almost deafening when she powered back with a return ace in the very next point.

Konta’s power is undoubtedly one of her main weapons on the women’s tour but she’s guilty of over-hitting shots at times. Halep’s defensive capability forces opponents into doing exactly that, which helped her race into a three-game lead.

Rallies and some well-executed forehand shots ensured despite the scoreboard, Konta knew she wasn’t down and out – instead just equally involved with proceedings.

4-1 down, Konta levelled the scoring at 4-4 after three successive aces despite being love-30 down. Despite eventually losing the first set after a comprehensive tiebreak defeat, it was the push she needed to give her further confidence that Halep wasn’t unbeatable.

Nerves and pressure were always going to be identified in the pre-match build-up, especially as Konta is Britain’s shining light on the WTA Tour.

It took time to grow into the match but confidence increased after she continued to hit powerful forehands, forcing Halep in a variety of directions for which she couldn’t always answer to.

After the first set, Halep had already run 20% more metres (889) than Konta. She had made the Romanian work for her points after the early exchanges and this had a positive impact as the match intensified in the second set. 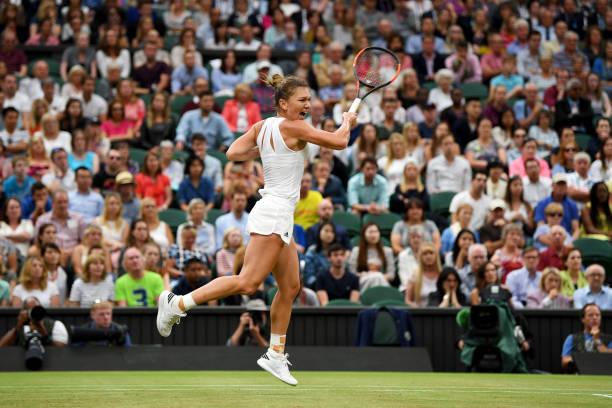 LONDON, ENGLAND – JULY 11: Simona Halep of Romania plays a forehand during the Ladies Singles quarter final match against Johanna Konta of Great Britain on day eight of the Wimbledon Lawn Tennis Championships at the All England Lawn Tennis and Croquet Club on July 11, 2017 in London, England. (Photo by Shaun Botterill/Getty Images)

Persistence and a number of aggressive shots made Konta’s presence a pest to deal with for Halep, with statistics reiterating her eagerness to frustrate.

She had already totalled 85 aggressive shots to Halep’s 29 before the midway point of set two. It was becoming increasingly apparent that despite her unforced errors, Konta was fast approaching a set of her own and you couldn’t say it wasn’t deserved either.

The sheer determination and concentration levels were high as she continued to hit back quickly, reducing the amount of time Halep had to predict her shots. Constantly near the baseline, it allowed Konta more opportunity and space to breach Halep’s defence. She did exactly that, though her 25-year-old opponent was not going to roll over easily.

A ferocious backhand cross-court saw Konta have two break points and a golden opportunity to serve the set out. Instead, she lost three consecutive points and conceded the game too.

From a possible 5-3 situation, it was 4-4 just like in the first set and her tendency to overhit was frustrating as it was proving detrimental to her chances of prevailing here. However, she showed spirit when it was needed most to level the match at 1-1 and things just got even more tense. 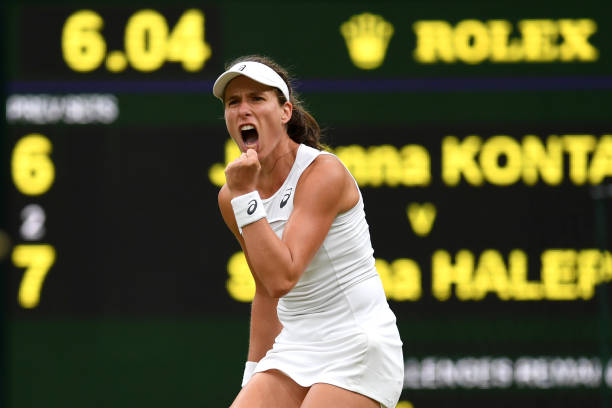 LONDON, ENGLAND – JULY 11: Johanna Konta of Great Britain celebrates as she wins the second set during the Ladies Singles quarter final match against Simona Halep of Romania on day eight of the Wimbledon Lawn Tennis Championships at the All England Lawn Tennis and Croquet Club on July 11, 2017 in London, England. (Photo by Shaun Botterill/Getty Images)

Halep hit six unforced errors in the first two hours of the match, which says a lot about her level of pinpoint accuracy and consistency – making the challenge even more tough for Johanna.

Konta’s shot-selection choices could’ve easily seen her relinquish the foothold she’d worked so hard to earn but buoyed by the partisan crowd on Centre Court, she was relentless in a tireless final set.

Halep herself did well to keep the scores very tight in the deciding set but the encounter was increasingly draining and Konta’s momentum seemed too much to handle in the latter stages.

She left herself too open to counter-shots after overcompensating to one side, which was finally capitalised to good effect.

Match point was unsurprisingly a bizarre one, as Halep stopped playing after hearing a loud scream in the crowd, and hit the net with her return forehand. She didn’t complain and it was a rather underwhelming end to a fantastic encounter with both earning their standing ovation. 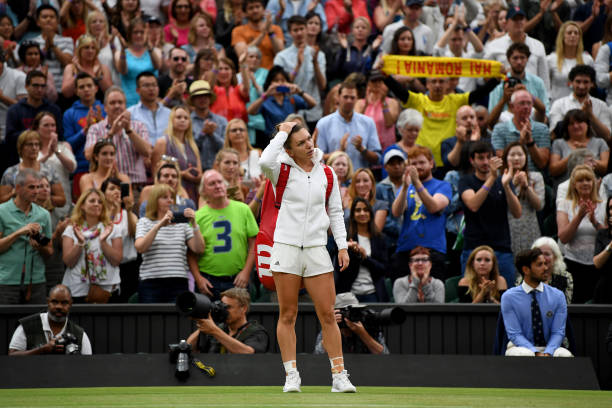 Halep did well overall and was unfortunate to lose against a spirited Konta on the evening. (Photo source: Getty Images)