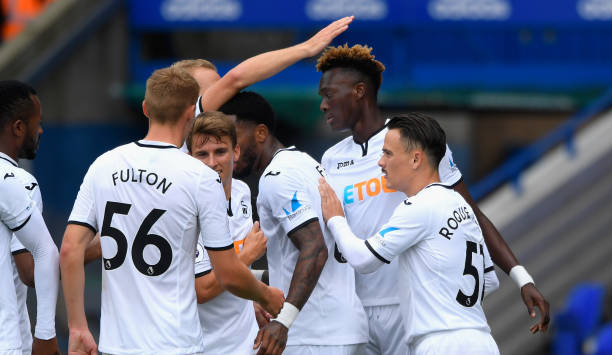 After netting 23 goals in the Championship for an underperforming Bristol City last season, Tammy Abraham has his sights set on replicating success in-front of goal for Swansea in the top flight.

A whole host of clubs were interested in his signature, both on a season-long loan deal as well as a permanent basis.

However, he opted to sign a new contract with the Premier League champions in west London and try to prove his worth among the country’s best players – after all, he had flourished in the second tier last season, which doesn’t always translate to top flight success.

He’s keen to make his mark and ultimately not become another of the talented Chelsea academy players unable to fulfil their potential. So much so that he reportedly rejected Newcastle’s loan advances and opted to join Swansea instead, as he could potentially be sidetracked by the nightlife in the North East.

Swansea, with its ambience as well as a familiar face in former Chelsea assistant Paul Clement, could turn out to be the right decision for Tammy. He turns 20 at the start of October and is just a month younger than former team-mate and compatriot Dominic Solanke – who left Chelsea at the end of his contract this summer to join Liverpool, after seemingly being frozen out of the first-team squad throughout last term.

The pair combined to create a fearsome attacking duo in attack at youth level and it’s likely that they could reunite for England at some stage in the next few years, should they both progress well with regular top-flight minutes and avoid injury setbacks.

The worry is that Abraham doesn’t get the regular minutes he deserves in the top-flight and is then not treated well enough or trusted accordingly to impress when returning to Chelsea.

It’s something that has occurred frequently in previous seasons and just like in the aforementioned link, Patrick Bamford excelled with Middlesbrough in the Championship but wasn’t given ample opportunities to replicate this in the top-flight. Now, he’s back with Boro and aiming to get his career back on-track after a promising start.

Signing a new contract isn’t the be all and end all that it may have been in the past. We’ve seen plenty of examples from players who’ve signed lucrative deals and still angle for moves away, months or a year afterwards.

So from Abraham’s perspective, it’s imperative that he hits the ground running in south Wales and having settled in already with the Swans, it’s easy to see how he can succeed under Clement’s guidance this term.

“I just want to do the best I can and hopefully to beat last year’s goal tally, by all means that’s what I’ll go for. I have to show the fans what I’m truly made of and what kind of player I am. I score goals but I’ve got good feet, good pace as well, so I would like to show the fans and help the team as much as I can while I’m here.”

Gylfi Sigurdsson’s proposed move to Everton is likely to be completed in the next week or two, with the teams reportedly haggling over the fee (around £45-50m).

That could have an adverse impact on Abraham’s influence in the final third, especially considering just how much of an integral part the Icelandic midfielder plays from midfield. It’s imperative they reinvest the money well and sign quality players before the window is over, otherwise it’s probable they’ll struggle in another relegation battle – just like last season.