Goals from Jemerson, Radamel Falcao and Kamil Glik helped Monaco get their Ligue 1 title defence off to a winning start despite going behind twice at the Stade Louis II.

Just a day after Neymar’s world-record £199m move from Barcelona to PSG was made official, the new campaign in France’s top tier began.

Monaco, who surprised many by winning the title and getting into the UEFA Champions League semi-finals last term, saw many of their key players depart for pastures new across Europe during the summer transfer window.

Kylian Mbappé and Thomas Lemar, both linked with moves themselves, started on this occasion and it was set to be an intriguing fixture especially after Monaco’s narrow 2-1 defeat by runners-up PSG last weekend in the Super Cup.

With all of that in mind, you could excuse the collective surprise when 21-year-old midfielder Zinedine Machach broke the deadlock with a powerful volley from close-range to complete a well-worked corner after just five minutes.

The ball was lofted towards the edge of the area, striker Andy Delort chested the ball down perfectly for the midfielder who made no mistake to strike sweetly beyond a helpless Danijel Subasic into the far corner.

So naturally, the hosts had to increase their intensity going forward. Radamel Falcao saw his header flash wide after a teasing delivery into the box by Thomas Lemar, before Mbappé stung Alban Lafont’s gloves with a powerful low strike at the 18-year-old’s near post after effortlessly advancing beyond the visitors’ backline.

Despite their intensity, Monaco were struggling to connect the final ball. Falcao’s cutback wasn’t powerful enough to reach Mbappé after they managed a quick break, but an unlikely source provided the equaliser just before the half-hour mark.

Joao Moutinho’s corner-kick delivery was inviting and Jemerson headed home, unmarked, to level the scores within an instant.

Monaco’s attacking dominance had finally been rewarded with a goal, which was likely to give them confidence to progress and look for more against an opponent who had nothing to lose, if you excuse the pun.

Rony Lopes, formerly of Manchester City and Lille, danced his way into the box but was thwarted by a smart reaction save from Lafont before the interval. Jemerson made an important sliding challenge to dispossess Machach after centre-back partner Kamil Glik was bypassed too easily, before the referee blew his whistle for half-time.

No changes were made by either side at the break as Monaco went in search of all three points, which their attacking dominance deserved.

Lemar forced Lafont into an excellent diving save to his right with a free-kick from range, before the resulting corner was dealt with by the Toulouse backline.

Sloppiness began to creep into Monaco’s play and fullback Djibril Sidibe was the primary culprit as he squandered possession in a poor area. Toulouse took full advantage and Jimmy Durmaz’ probing pass was controlled well initially by Delort, before he slammed hard and low beyond Subasic into the bottom corner.

Lopes was sacrificed by Leonardo Jardim as Guido Carillo came on, with Monaco needing some form of change to improve.

Meanwhile, Toulouse made a substitution of their own with Machach limping off after the aforementioned tough challenge sustained in the first-half. Defensive-minded midfielder Wergiton Somalia came on in his place, with the visitors keen to maintain their slender advantage over the defending champions.

Alas, it wouldn’t last long once again. Mbappé took up a number of different attack-minded positions to try and influence the game in more effective fashion, so it was unsurprising to see him have some joy on the left-hand side.

Constantly beating his marker in one-on-one battles, he combined well with advancing fullback Jorge before the Brazilian whipped a cross into the area for Falcao. The 31-year-old, who netted 21 goals in 29 Ligue 1 appearances last season, opened his account for the new campaign to equalise.

Monaco were finally in the ascendancy, at least it seemed, as Mbappé continued to dance his way beyond the Toulouse backline. Until the turf had other ideas.

While shaping to shoot (and shrugging off an opposition challenge), his knee buckled under the turf and he writhed in pain, with the BT Sport commentator bellowing “Mbappe’s gone down, it’s his knee! This could be sensational for Mbappé’s season.”

Immediately, you fear the worst. Luckily though after receiving some treatment from the physios, the 18-year-old returned back to the pitch but it was unlikely that he would play the full 90, especially with coaching staff overly cautious about injuries at such a tender stage in the year.

He was replaced after 75 minutes with Allan Saint-Maximin coming on in his place, minutes after Joao Moutinho’s free-kick helped the hosts on their way to taking the lead for the first time this evening. 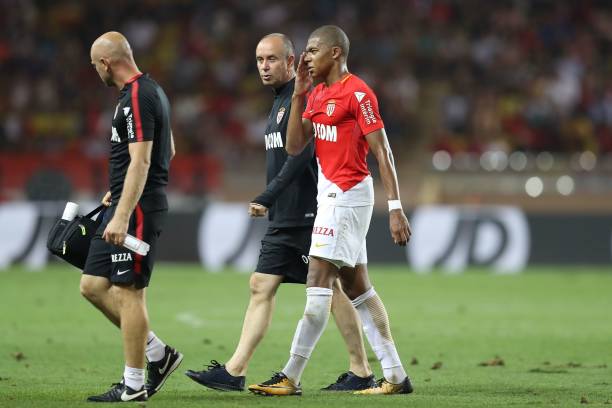 A worrying sign: Mbappé limped off in the latter stages after getting his knee caught in the turf minutes beforehand. (Picture source: Getty Images)

Although centre-back Glik would be adamant that he did indeed claim a touch off the back of his head inside the area, the Portugal international’s delivery-turned-effort deceived the backline as well as Lafont before floating into the corner.

It was a bizarre way to concede and considering all three of Monaco’s strikes had come from deliveries into the box, it was alarming that Toulouse evidently didn’t learn their lesson from Jemerson’s first-half leveller.

Yaya Sanogo, released by Arsenal earlier this summer, came on for Pascal Dupraz’s side in search of another goal which would at least help them share the spoils in the hard-fought battle.

Youri Tielemans, who impressed despite defeat to PSG in the Trophée des Champions final last weekend, came on for the final few minutes to help close out the game. Tenacious, composed and effective, the talented Belgian’s cameo was an efficient one – though he’ll be hoping for more starts in future.

All-in-all, it was far from a vintage Monaco performance but it’s the true mark of champions that prevail when they’re not performing at their best. Jardim’s side did so tonight and despite some sloppiness, you’d think they would collectively iron out their deficiencies as the season progresses.

A five-goal haul during the curtain-raiser for the 2017/18 Ligue 1 campaign, not a bad way to start by any means.