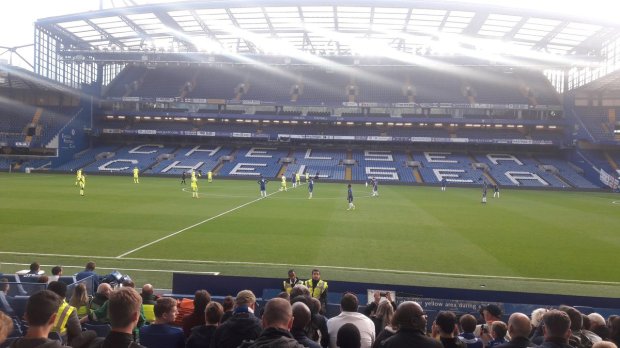 Second-half strikes from Reece James and Luke McCormick helped Chelsea u23s to victory in their first home fixture of the new Premier League 2 campaign over Derby County on Friday evening.

In-front of just over 1,000 spectators at Stamford Bridge, Chelsea were made to work for their goals and the result could’ve been completely different, had Derby been more clinical or not denied by the towering Marcin Bułka in goal as well as the crossbar too.

It wasn’t a full strength Chelsea side in fairness, with many of their best under-23s either involved in Antonio Conte’s first-team picture for the time-being, or in the process of getting loan spells organised before the end of the month.

Trevoh Chalobah, who damaged ankle ligaments during England’s u19 European Championship victory last month, reassured me before kick-off that he was recovering well and expects to be back soon.

Alongside Joseph Colley at the back, was 16-year-old hot prospect Ethan Ampadu. Ethan has featured on my radar a few times over the past year or so but this was the first time I had the privilege of watching him live so naturally, I relished the opportunity to see just why the central defender was so highly-rated.

He was excellent and alongside first goalscorer James, my pick for Man of the Match on the evening. A ball-playing defender with plenty of composure, he didn’t shy away from possession and was regularly on the ball – especially in the first 45 – as Chelsea looked to control the tempo and gradually work their way into the match.

It was almost a game of chess as Derby set up well and looked to frustrate their hosts. They wouldn’t have expected Chelsea’s final ball to be so inconsistent at times but it just highlighted how it’s still very much early days in the campaign and players are still getting up to speed while building chemistry with new arrivals.

Dujon Sterling (L) was continually advancing down the flanks, looking to create chances on the ball. (Photo source: Dan Davies)

Kellan Gordan had Derby’s best chance of the half but saw his effort on goal smothered by Bułka, while the visitors were repeatedly forced backward by Ampadu and James’ dominance in the aerial battles.

At half-time the scores were level and it was fair to say that Chelsea lacked a spark in attack, which Callum Hudson-Odoi seemingly expected to deliver.

Hudson-Odoi (R), who netted a brace during their 2-2 draw with Plymouth in midweek, started again here and caused plenty of problems when given an opportunity to do so. (Photo: Dan Davies)

He was constantly dropping deeper and creating angles with space for team-mates to lay him off, but cut a frustrated figure at the lack of service he’d received in the final third.

But despite this, Hudson-Odoi started the second 45 brilliantly and got the Chelsea supporters on their feet everytime he advanced quickly with the ball.

Jordan Houghton made his return from a six-month injury to provide experience in midfield, while Miro Muheim was brought on to try and unlock Derby’s backline.

Though their opening goal was fortunate, you couldn’t say it wasn’t coming. McCormick’s corner dropped towards the near post, where James reacted quickest and fired beyond Kelle Roos in the Derby goal – though his strike took a significant deflection on the way.

The deadlock was finally broken and as time continued to tick down, it quickly became a frantic but entertaining finish. Timi-Max Elsnik, Derby captain, was thwarted by Bułka after a driving run through midfield, before the Polish stopper got up and quickly denied substitute Luke Thomas just moments later.

Isaac Christie-Davies was close to an assist but his attempted pass towards Hudson-Odoi was cut out by Ethan Wassall before Emil Riis Jakobsen could only watch on as his shot was saved onto the crossbar by Bułka.

Calum MacDonald walked down the tunnel after being given his marching orders for a deliberate handball, having already been booked earlier on, so Derby finished the final few minutes with a man disadvantage.

Dujon Sterling and Miro Muheim combined well to retain possession on a counter-attack in stoppage time, before McCormick was released by Christie-Davies. After his first touch, you would’ve thought he missed a chance to finish the game in style but alas, quickly recovered to slot home from close-range and wheel away to celebrate.

In Friday’s other Premier League 2 Group A result, Leicester beat Everton 1-0 away from home. Chelsea host the Toffees next week hoping for the same result.

Ethan Ampadu doesn’t turn 17 until next month and after performances like this one, it’s easy to see why plenty of Premier League clubs were interested in his services.

It’s refreshing to see youngsters come through the ranks at lower-league clubs, where they’ve accumulated different experiences, before joining top sides – Ampadu is one of the best in his age-group and looks remarkably comfortable playing u23 football already.

Ampadu (L) tussling for possession during his first appearance at Stamford Bridge as a Chelsea player, having signed earlier this summer from League Two club Exeter City. (Photo: Dan Davies)

Should he continue to perform like this on a consistent basis under Joe Edwards, I’ll be surprised that he’s not loaned out for first-team experience in League One or the Championship in twelve months’ time. Trevoh himself is already being tipped for a January loan spell and only turned 18 last month so it’ll be interesting to track their progress with time.

Definitely two defensive talents to watch out for in the future. For the full gallery from this fixture, click here. My next u23 outing will be on Monday, as Arsenal host Manchester City – that always promises to be an exciting watch.