Arsenal u23s were 4-3 winners over Premier League 2 rivals Manchester City this evening, though were made to work hard for their win after Jack Wilshere’s dismissal shortly after the hour mark.

Wilshere, making his second u23s appearance following successful recovery from the fracture which saw him sidelined for the final few weeks of last season with Bournemouth, impressed beforehand.

In-front of just under 3,000 supporters in north London, Wilshere and his younger counterparts raced into an early two-goal advantage after some slick passing moves were rewarded with razor-sharp finishing from both Reiss Nelson and Edward Nketiah.

The talented pair featured in Arsenal’s pre-season tour of Asia last month and are expected to have extremely bright futures in the game. They’ve already been promoted to the first-team recently and should feature in UEFA Europa League fixtures, as well as Cup competitions under Arsene Wenger this season.

Donyell Malen could’ve and probably should’ve broken the deadlock after four minutes. Having been released by Nketiah, he raced goalwards but could only watch his chipped effort skid off the turf and out for a goal-kick, after good work from Daniel Grimshaw to rush out and apply pressure on the Dutch youth international.

But it was Nelson, who netted a brace during Arsenal’s 3-2 win over Derby last week, who opened the scoring with aplomb. After combining well with Joshua Dasilva on the right-hand side, he unleashed a low drive into the bottom corner.

Having effortlessly weaved his way beyond City markers in the build-up, it was almost astonishing at how quickly the Young Guns’ transition from defence to attack was – which proved pivotal here.

Ainsley Maitland-Niles danced his way past both Tyreke Wilson and Ed Francis to unlock City’s backline once more just minutes later, before teeing up Nketiah to smash home from six yards out.

2-0 and Arsenal were fully deserving of their lead, though the visitors halved the deficit on the half-hour mark. For their strengths in attacking transition, the same couldn’t be said for how quickly they recovered defensively, and Simon Davies’ side could sense this.

Wilson’s lofted ball in the area was latched onto by 17-year-old Welshman Matthew Smith, whose run was unmarked and made no mistake to head home from close-range beyond a helpless Matt Macey.

Wilshere was clearly pulling the strings in midfield and though City tried their utmost to apply pressure, forcing mistakes, the creative Englishman was unmoved by their efforts. In-fact, it motivated him to work harder and you could see by his intelligent movements as well as displaying an excellent passing range that he was enjoying himself.

Nketiah’s work in-front of goal was made easy by Maitland-Niles for his first strike, but Wilshere’s probing pass was perfectly-weighted and allowed the teenager to notch a first-half brace. Having split City’s backline with Wilshere’s ball in-behind, he curled his effort into the far corner past Grimshaw’s despairing dive. 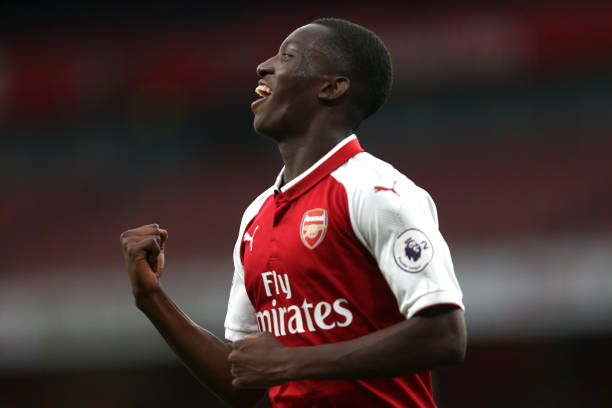 3-1 going into the break and despite a worrying moment at the back, Arsenal were full value for their lead. Little did they know, things were going to get significantly harder after the interval.

Not straight away, mind. Joshua Dasilva, playing in an unfamilar position at right wing-back, continued to get himself into dangerous positions down the flank and provided width to stretch City – who were still trying to contend with Reiss Nelson’s threat as he persisted to drift into different positions and remain unpredictable in the final third.

His inviting ball out wide rewarded Dasilva’s run into the box before the teenager cut the ball back for Nelson, who was waiting patiently in the heart of City’s area. He cooly slotted his strike into the corner and left the visitors bewildered – how did they manage to concede another and look so disorganised at the back?

The complexion of the game changed completely shortly after the hour mark. Having been fouled on a handful of occasions prior to this particular incident, Wilshere was visibly frustrated by the lack of protection he had received from officials – after all, this was his second match back following recovery from a leg fracture sustained in mid-April.

So when he was needlessly bundled over, recklessly by Matt Smith, you could excuse his frustration as he actively stepped to the teenager to berate him over the challenge. While doing so he pushed the defensive midfielder, who fell clutching his face – even though he hadn’t been hit there – which only caused tempers to flare further as City players rushed to the aid of their teammate and angrily confronted Wilshere.

Naturally, some of the Arsenal players backed up their senior star in an angry exchange which saw both Wilshere and Tyreke Wilson, the City aggressor, sent off. It just seemed typical though that Matt Smith, whose silly challenge caused the issue, got away with no consequence or warning from the officials.

City were boosted by Wilshere’s dismissal and enjoyed more of the ball, while Arsenal were looking less assured defensively. It was obvious that Wilshere’s influence had helped them maintain confidence but it was set to be a good test – how could they handle proceedings without his presence, especially with a lead to protect?

Brahim Diaz, who was City’s constant livewire, made it 4-2 with a well-taken strike which arrowed past Macey into the bottom corner. The creative Spaniard was persistent in trying to find ways where he could exploit the Young Guns’ backline and finally made a breakthrough after 68 minutes.

A dubious penalty decision was awarded in City’s favour five minutes later and you could almost sense things changing drastically. Krystian Bielik was penalised despite clearing pulling away from an attempted challenge after realising he wouldn’t have got there in time to intercept the danger, though substitute Benjamin Garre still went down and his appeal was questionably given.

Lukas Nmecha made no mistake from the penalty spot to reduce City’s deficit to one goal having sent Macey the wrong way, which set up a nervy 15 minutes to finish.

It was a surprise that Steve Gatting didn’t opt to make substitutions sooner than he did, though both Marcus McGuane and Vlad Dragomir entered the fray in the final ten minutes to try and defend the lead.

Both teams came close to scoring again, especially City despite some dogged defending at times, but the final whistle eventually blew and Arsenal narrowly avoided dropped points in a fixture they really should’ve sealed in the first-half.

With matches against Liverpool and Manchester United up next, it’s not going to get any easier for the Young Guns either.