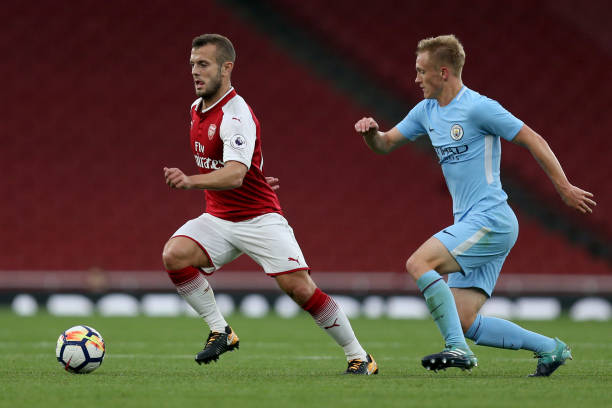 Jack Wilshere is a talented player, whose career has been blighted by lengthy injury problems. After his latest incident with Arsenal u23s, is he being unfairly targeted?

Jack Wilshere deserves another chance – whether that be at Arsenal or elsewhere.

On the surface, it may seem embarrassing or the final fall from grace for Wilshere, who had the world at his feet as a talented teenager in 2011. Fearless, energetic and full of world-class potential, it’s a shame that we as supporters have not been lucky enough to watch the Englishman at his best on a regular basis.

However, he’s far from the freshly-faced teenager that burst onto the scene in north London all those years ago now. He’ll turn 26 at the start of January and at that stage, if he doesn’t depart on a permanent basis during the Summer transfer window, will he be permitted to agree upon a pre-contract agreement with other interested clubs?

Arsène Wenger has admitted that he’s prepared to listen to offers for Jack, as he wants the best for him – a lack of regular minutes is far from beneficial in aiding his development. From Wenger’s perspective, it’s a similar stance to the one which saw Wilshere leave home comforts and join Bournemouth on a season-long loan deal on deadline day twelve months ago.

When reflecting on the move, many would regard Wilshere’s spell with the Cherries as an unsuccessful one. In terms of numbers, you could understand this belief: no goals and two assists in 27 Premier League matches is unimpressive for someone of Wilshere’s ability.

However, once you delve deeper into the statistics, you’ll find they are deceiving. In 1,918 total minutes, he created 34 chances, which is more than any other Bournemouth player. A successful take-on percentage of 70% is also impressive, whilst he maintained an 84% pass accuracy rate and sustained 48 fouls too. Only Paul Pogba (6) and Kevin de Bruyne (9) hit the woodwork on more occasions than Wilshere’s five too, so it’s not as if he wasn’t threatening in goal-scoring positions either.

While the likes of Joshua King and Callum Wilson were receiving all the credit, Wilshere was usually at the heart of their attacks in the final third.

Jack Wilshere was Bournemouth’s chief creator and despite playing in a midfield trio for the most part, he was unafraid to take risks while refusing to neglect defensive responsibilities.

He missed the final five matches of the last term after suffering a fractured fibula during their 4-0 defeat away at Tottenham. Just like on previous occasions, he sustained his injury after a poor challenge, this time by compatriot Harry Kane as he blocked the forward’s effort and was caught by his follow-through in the collision.

Having only just regained full fitness, he began playing U23 matches to start the Premier League campaign and gradually increase match sharpness. On this occasion, against one of the best sides in the country, he was influential from a deep-lying role in midfield.

The centre of Arsenal’s attacks going forward, he persisted with his mazy dribbling but clearly took a more calculated approach than in previous seasons – opting when to pass and avoiding opposition challenges where possible, whilst setting up team-mates with excellent defence-splitting passes.

Then, the incident occurred and all focus was shifted on Wilshere’s temperament – would he be leaving as a result? Is he in a good mental state to play after so many injuries if he cannot remain composed?

It wasn’t the first late challenge that Wilshere had suffered either, but the sheer force and lack of care in this instance understandably pushed him over the edge. Obviously, I’m not condoning his behaviour but for someone who has recently recovered from a lengthy injury like his and has such a poor record with injuries, you can understand why he reacted in the way that he did.

However, when former players are in the media and actively criticising Wilshere like they continue to do now, it very much feels like he’s an easy target to blame. That shouldn’t be the case, instead the opposite for a talented player who still has the capability to prove his doubters wrong.

Chris Sutton described Wilshere’s dismissal as a new low and cited a lack of goals (and assists) at Bournemouth last season as the main reason why he should leave Arsenal permanently.

Bournemouth themselves didn’t try and make a formal approach this summer, though that’s not a secret. Eddie Howe managed Wilshere’s fitness well across the campaign and despite being an admirer of his talent, knew that a move was heavily unlikely anyway.

Ian Wright has said that Wilshere isn’t “in a good place” after his sending off, because he retaliated following a reckless challenge. How does he know that?

Tony Cascarino meanwhile, stated Wilshere is not in the same category of midfielders at present as Nemanja Matic or N’Golo Kanté and should’ve instead gone abroad. Well, thanks for that insight! Perhaps he’s not, because they are entirely different types of midfielder? Or maybe because, he – unlike both – has suffered troublesome injuries which have limited his minutes drastically in recent years?

The “play abroad instead” mantra is a lazy way of implying that Wilshere should’ve tried harder to assert his quality last season, which reiterates the importance of taking care before making such provocative comments such as these.

Evening Sam…Intrigued to hear more about how you think this is a career low for me? Would love a sit down with you? Look forward to it. https://t.co/nyVzXGyNxA

Despite responding to comments like these publicly on social media, you can only hope that Jack Wilshere responds in the perfect way to silence his critics and flourish, whether that be at Arsenal or elsewhere in the future. His injury record makes him a risk, yes. Bournemouth’s attentive care proves that it can be done, just depending on whether or not clubs are prepared to take that chance.