Prior to his side’s 2-0 away defeat at the hands of Hoffenheim this past weekend, a fact about Carlo Ancelotti and his opposite number Julian Nagelsmann was shared on social media. The Italian, who was 28 at the time, had just sealed a move to AC Milan in the same month that Nagelsmann was born.

Nagelsmann has quickly established himself as one of the world’s best young managers and at 30, it’s fascinating to track his progress in Germany.

Not long after Ancelotti’s own 30th birthday, persistent injuries saw the former midfielder’s career cruelly cut short after a plethora of issues which took their eventual toll on his body.

A world-class manager, it’s no surprise that Carlo’s excellence off the pitch was matched by technique and intelligence on it.

Having become accustomed to hard work as well as discipline from a young age, an eagerness for more in life than the fields worked by his father proved effective motivation.

Spotted by Parma and signed as a 15-year-old, he quickly settled and earned an opportunity to assert himself in the senior squad. Making his professional debut at 18, he was regularly deployed in the number ten role or as a second striker, as an eye for goal was clear to see. 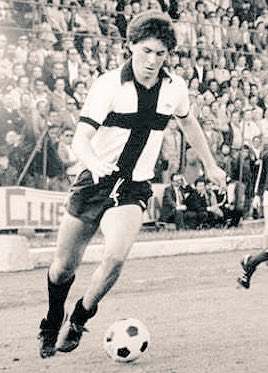 Ancelotti during his early days at Parma (Picture source: Twitter)

Ancelotti’s contributions were significant in helping Parma to a second-placed finish in the Serie C1 Girone A league during the following campaign, where he managed to score a crucial brace during their Serie B play-off fixture against Triestina.

The scores were level at 1-1 but unfazed, Carlo’s two-goal haul sealed promotion into Italy’s second tier while seeing his own stock rise as one of the best youngsters in the country.

Inter Milan were heavily interested in his signature, though he instead completed a move to AS Roma. Under Nils Liedholm, he played as a central midfielder but was also utilised on the wing at times too. Over time, his performances helped establish stability in the centre while still providing an attacking threat from deep.

In a star-studded squad with players like Brazilian midfielder Falcão as well as Italian duo Bruno Conti and Roberto Pruzzo, Ancelotti proved himself as one of the club’s most important players. With that in mind, it’s a shame that he only won the Scudetto once with those team-mates.

After finishing second and third in successive seasons, Ancelotti’s first league triumph came during the 1982/83 campaign – Roma’s second ever in history.

The season beforehand, they struggled to maintain a proper title challenge and that was in part due to Ancelotti’s troublesome knee issues. He played less than 400 minutes during that term.

Hungry for more, Ancelotti’s excellent performances helped propel Roma into the 1984 European Cup final. Injury once again struck, meaning he missed another big opportunity to attain silverware as Liverpool prevailed on penalties at the Stadio Olimpico.

Given the captain’s armband by new manager Sven-Goran Eriksson the following year, they narrowly fell short in the 85/86 campaign with Juventus victorious with a four point lead.

Having won the Coppa Italia on four occasions during his eight seasons at the club, you could excuse Carlo for a burning desire to achieve more success before retirement, especially with the rate at which injuries were sustained.

He was expected to feature and excel for Italy during the 1982 World Cup, though a long-term knee injury saw him sidelined before the tournament began.

Forced to watch on as his compatriots eventually won the competition would’ve spurred him further to reach the 1986 edition with a clean bill of health.

Despite doing exactly that, manager Enzo Bearzot surprisingly didn’t choose him to play any minutes despite naming Ancelotti a part of the 22-man squad.

Instead opting for the unsuccessful pairing of Fernando De Napoli and Salvatore Bagni throughout, Italy were knocked out in the last-16 by France, who finished third.

Enzo was heavily criticised for an over-reliance on more experienced players who were clearly past their best, though all was not doom and gloom down the line.

Azeglio Vicini was announced as Italy’s new boss after Bearzot handed in his resignation. Ancelotti had finally been given the opportunity he deserved for the Azzurri, and was an important part of the squad which reached the semi-finals of UEFA Euro 1988. 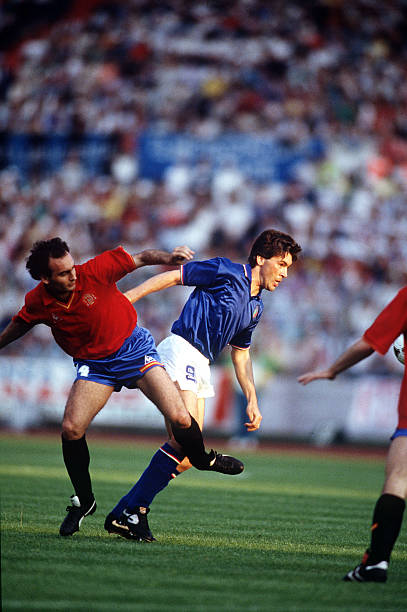 Scheduled to represent Italy at the Summer Olympics in Seoul that summer, another cruel injury was sustained. The meniscus of his right knee was severely damaged and prevented him from taking part during the tournament. Italy finished fourth, and it was yet another timely reminder that Ancelotti’s injury record wasn’t improving with age.

Ancelotti joined Milan in the summer of 1987 and the next few years were undoubtedly the best in terms of success across all competitions.

During these years, the Rossoneri began assembling an even stronger side with financial backing from club president Silvio Berlusconi present.

Paolo Maldini, Franco Baresi, Frank Rijkaard, Ruud Gullit and Marco van Basten were just five of the players who pushed Milan forward as they continued to improve at a rapid rate.

Despite not being the quickest, Ancelotti utilised his intelligence to good effect. A creative-thinking player who proved leadership and organisational qualities at an early age, he made up for a lack of acceleration with hard work as well as a tenacious attitude.

His aforementioned attacking threat from distance was perhaps most memorably seen in Milan colours, where he netted a fantastic strike during their 5-0 thrashing over Real Madrid in the 1989 Champions League semi-finals.

After receiving a pass from Gullit, he skipped past two Real players before unleashing a powerful right-footed drive goalwards. If Paco Buyo had lifted his outstretched glove inches higher, the shot probably would’ve shattered the Spaniard’s wrist and still gone in.

It was his first and only goal in Europe’s top club competition but again proved pivotal as it began an unforgettable rout, especially as the tie was deadlocked at 1-1 before Ancelotti’s moment of magic after 20 minutes.

Steaua București were runners-up during that campaign, with Ancelotti completing the full 90 as Milan cruised to a 4-0 win.

Back on the international stage, Ancelotti featured in the 1990 World Cup on home soil under Vicini. An injury during their second group stage fixture against Austria meant he only played three matches across the tournament, though returned to help beat England as they finished in a respectable third.

Announcing his retirement from international football the following year having made 26 caps for Italy, his final appearance was under Arrigo Sacchi – who he then went on to assist between 1992 and 1995.

Ancelotti was eventually forced into an early retirement at the age of 33, as continual knee injuries and competition from natural successor Demetrio Albertini were too much to handle.

A 4-0 win over Hellas Verona was his final career match, where he came off the substitutes’ bench midway through the second-half and scored a brace before being showered with an ovation from the Milan faithful.

An excellent passing range, intelligence in addition to a wide number of abilities – many describe Ancelotti as Andrea Pirlo’s predecessor in the type of deep-lying playmaker role.

Injuries are ultimately part of what football entails but in Carlo’s case, it’s frustrating to know that he could’ve achieved even more during an illustrious playing career before eventually hanging up his boots and turning to coaching.