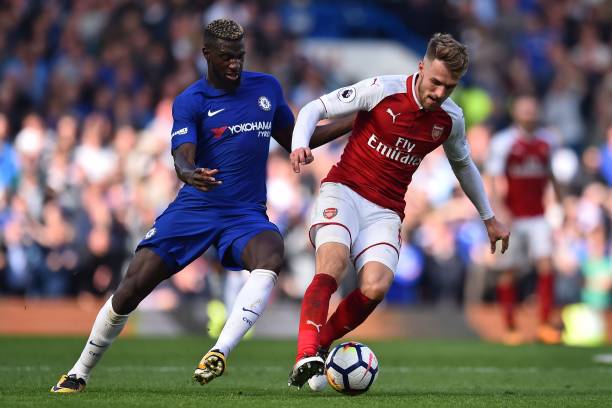 Despite a nervous final 15 minutes for both sides, including some fierce challenges and Chelsea’s third red card dismissal of the season, an improved Arsenal performance saw them earn a hard-fought point against the defending champions today.

Arsenal are incredibly susceptible on the counter-attack. So when they travelled the short distance to west London with London rivals Chelsea next on their fixture list, it was obviously going to be a tough test.

Having already succumbed to defeats against both Stoke and Liverpool away from home this season, it was clear before kick-off today that the Gunners needed a relevant response to the typical doubters who’d once again reared their head: is Wenger tactically past it? Are the players just not good enough or worse still, unprepared to play for their boss?

Plenty of questions were to be answered in this fixture, which always promises to be an intriguing one.

Mesut Özil (knee) was unavailable for selection, while Alexis Sánchez could only feature among the substitutes’ bench – perhaps after his efforts on Thursday evening in UEFA Europa League action against FC Koln.

So, who would be spearheading the visitors’ frontline? Alex Iwobi, Danny Welbeck and Alexandre Lacazette.

It’s fair and equally ruthless to say the trio effectively didn’t touch the ball much in the opening exchanges. Chelsea started quickly and looked threatening as they probed the Arsenal backline, scanning for exploits to eventually beat Petr Cech. Pedro had a shot from range comfortably smothered, whilst Álvaro Morata came narrowly close to breaking the deadlock in the air too.

Hector Bellerín was clearly enjoying his battle with Marcos Alonso down the right-hand side, as he skipped past him twice in quick succession to create goalscoring chances. Danny Welbeck headed narrowly wide, while Lacazette’s close-range effort was parried then caught by Thibaut Courtois.

Nacho Monreal’s crunching tackle on Pedro was perfectly-timed and while it saw the Spaniard receive medical treatment on the touchline, this was seen as encouraging.

Why? Arsenal had settled. Tougher in the tackle than previously, their passing was relatively accurate and positionally, players were responsible and didn’t veer recklessly away from their jobs.

Morata was frustrated by a lack of support in the final third, the Blues began tallying up fouls and support inside Stamford Bridge had increased – they knew that it wouldn’t be a typically routine victory.

Aaron Ramsey went on one of his trademark bursting runs forward and almost broke the deadlock too, on the stroke of half-time. His eventual shot cannoned back off the post and under pressure, Lacazette fired over the crossbar as the Blues drew a collective sigh of relief.

They had allowed the Welshman too much space in transition and could’ve easily been a goal or two behind, but for the woodwork and smart saves from Courtois, to be level at the break.

Tiemoue Bakayoko was introduced as a substitution after the interval, with Pedro clearly still struggling from Monreal’s firm challenge midway through the first-half.

Chelsea needed some fresh impetus, something to give them their edge back as it became clear they were lacking ideas. David Luiz was the first player booked, for an overzealous but accidental clash with Koscielny while attempting an overhead kick.

Bakayoko’s rampaging run forward provided a spur of welcome energy that the hosts needed in attack, though the physical battle between Morata/Mustafi was interesting – neither regularly had the upper hand, though the German did his best to frustrate his adversary without being penalized. 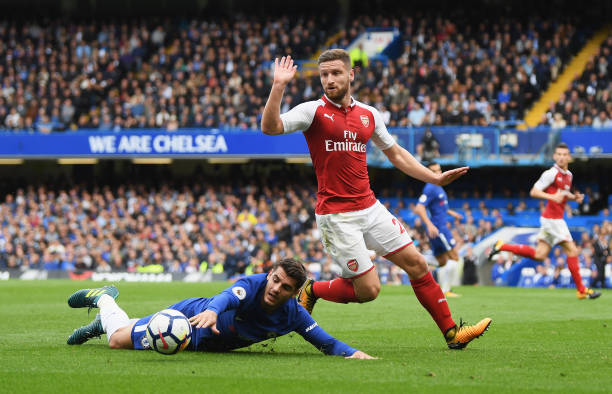 LONDON, ENGLAND – SEPTEMBER 17: Alvaro Morata of Chelsea and Shkodran Mustafi of Arsenal battle for possession during the Premier League match between Chelsea and Arsenal at Stamford Bridge on September 17, 2017 in London, England. (Photo by Mike Hewitt/Getty Images)

Willian fired a powerful effort over the crossbar after Fabregas’ disguised free-kick caught the visitors unaware and as time continued, it looked more as though a moment of brilliance would be needed to open the scoring.

Cesar Azpilicueta was excellent defensively and needed to be, contending with both Lacazette and Kolasinac as they made surging runs beyond his team-mates in dangerous areas – on opposite sides of Chelsea’s defensive trio.

Now though, it was time for the box office players to make their mark. Alexis (replaced Lacazette) and Eden Hazard (on for Willian), both of whom have netted goals in this fixture previously.

Olivier Giroud was also introduced into the fray, with Danny Welbeck carrying a knock to the thigh after a 50-50 with David Luiz.

Skhodran Mustafi converted Granit Xhaka’s inch-perfect cross beyond Courtois from an inswinging free-kick, though as he wheeled away to celebrate, ironic jeers reverberated around the Bridge. The fourth official down the far side had already flagged for offside and Chelsea were once again relieved. 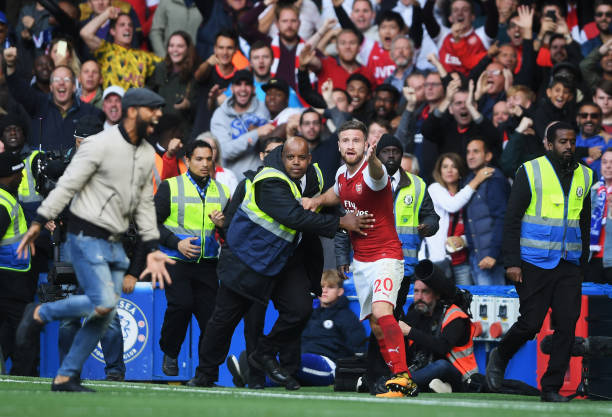 LONDON, ENGLAND – SEPTEMBER 17: Shkodran Mustafi of Arsenal reacts to having his goal rulled for offiside during the Premier League match between Chelsea and Arsenal at Stamford Bridge on September 17, 2017 in London, England. (Photo by Mike Hewitt/Getty Images)

The game had opened up at this point, with Hazard eager to make his mark before the full-time whistle. Just like usual, he weaved beyond two defenders before watching his eventual shot held by Cech. It lacked direction but Chelsea were rejuvenuated as the game broke out into a nail-biting version of pinball.

Attack vs attack, defence vs defence, tackles, slips, fouls, cards, quick free-kicks and more. The game had descended into madness before Mohamed Elneny, on as a sub five minutes prior, was booked for a late challenge on Hazard just as he attempted to accelerate forward.

Then, the frantic nature of this fixture was halted temporarily. Luiz slid in late on Kolasinac after his loose touch sent the ball out of his grasp and referee Michael Oliver brandished a straight red card for the Brazilian’s reckless challenge. 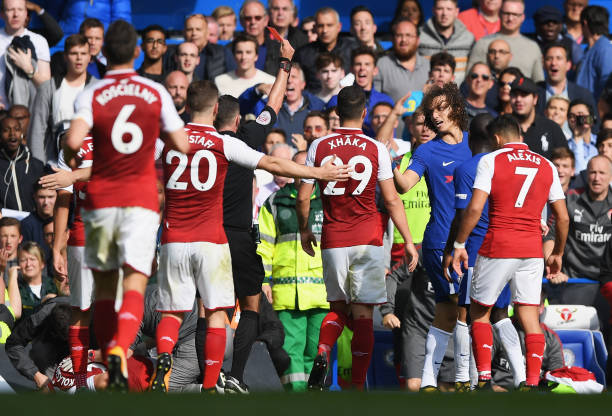 Kolasinac was then booked for a cynical – but important – tackle to deny Hazard a chance to run at his teammates.

Bellerín was also in Michael Oliver’s book before the final whistle, but the scores remained goalless. A hard-fought point for both, though a much improved Arsenal performance from the one who have struggled against big sides in recent seasons.