According to reports, Napoli forward Dries Mertens has attracted interest from a number of top European sides – with Arsenal heavily linked. The 30-year-old Belgium international signed a new deal with the Partenopei in May but within the contract, there is a £26.5m release clause inserted.

The Gunners could make a move to acquire his services as Alexis Sánchez’s replacement.

Speculation has run wild about who and how the Gunners will attempt to replace their talismanic Chilean. Alexis previously made clear his intentions to leave with Manchester City having a succession of bids rejected, including two on deadline day last month.

He is in a similar situation to Mertens, with less than twelve months to run on his existing contract at the Emirates. Having rejected improved extension deals, it became increasingly apparent that the former Udinese and Barcelona forward wanted a new challenge – especially given Arsenal’s failure to sustain a proper title challenge in recent seasons.

Dries continues to improve with experience

Mertens joined Napoli for £10m back in the summer of 2014 from Eredivisie side PSV Eindhoven, and has established his quality in Europe as well as domestically across Italy.

Last season was his best in terms of goal contributions: 34 goals and 15 assists across all competitions as Napoli finished five points below reigning champions Juventus. They scored the most goals across the division with 94, while succumbing to a 6-2 aggregate defeat in the Champions League last-16 against eventual winners Real Madrid.

At 30, he’s reaching his peak years and still has a few more seasons at the top of his game too. Versatile in attack and able to play across the final third, on either wing or as the centre forward, he represents an attractive option for Arsene Wenger to pursue in future.

Mertens is said to be open towards the possibility of a new challenge in a different country, though it’s unlikely that Napoli will let him leave without a fight.

They only inserted a release clause, believed to be £26.5m, to appease the Belgian and if clubs express their interest, it would be hard to keep hold of him. Especially if he does ask for a move away, given all he has done for them over the past four seasons.

He’s already scored eight and created four in 10 appearances this term, the latest of which was during a 3-1 win over Eredivisie champions Feyenoord yesterday. 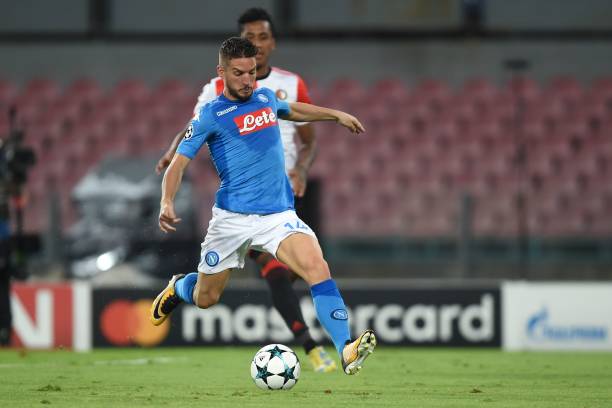 It’s clear that he continues to improve his efficiency in-front of goal and given how transfer fees have inflated over the past few years, £26.5m would be seen as a bargain for a player of his quality.