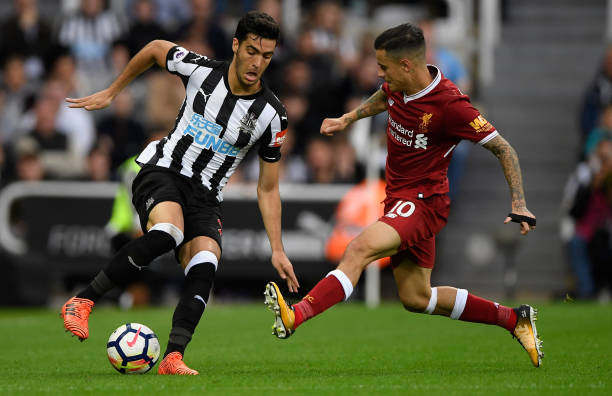 Merino, 21, only joined the Bundesliga side from Osasuna last summer. He made nine appearances for BVB, but crucially didn’t feature during their UEFA Champions League campaign and regularly appeared an unused substitute.

In comparison, he has featured in all of Newcastle’s Premier League fixtures so far this term. Playing either in defensive midfield or further forward across the centre alongside Isaac Hayden or Jonjo Shelvey, his performances have justified the excitement behind arriving on Tyneside this past summer.

The club have rewarded his form and eagerness to learn with a five-year contract. Rafael Benítez was happy to confirm the news and lavished praise on the Spaniard, who has made 22 international caps at under-19 and u21 level to date.

“I’m really pleased we have been able to bring Mikel to the club permanently. He has played very well since he joined us. He has settled in quickly, has a lot of quality on the ball and is keen to learn – that is a crucial part of his future development.”

Benítez continued, saying: “He has made a great impression at the club, and he is a good professional. He has confidence, but he is still young and has things to improve. He has to keep working hard and playing well, and hopefully he can improve and enjoy [it] here.”

Merino inadvertedly benefited from Shelvey’s dismissal during their 2-0 defeat by Tottenham on the opening weekend of the campaign. Since appearing off the bench there, he’s impressed and retained his place in Newcastle’s midfield – winning the club’s player of the month award for August too.

Merino expressed his happiness at the deal being concluded. “I’m really happy to be here, and for this part of the contract to finally be official. I’m happy to be here for five more years and I hope to keep playing for this club and to give good things to all the people.”

“I have always been focused on football but it’s good to know it’s now official and people will know it. I’m focused on my displays and improving myself, and I’m really happy to have signed this contract.”

Merino will be hoping for another encouraging display, should he feature during this weekend’s trip to Southampton. Newcastle have traditionally struggled on the south Coast but given the hosts’ form, will be confident of earning a decent result.