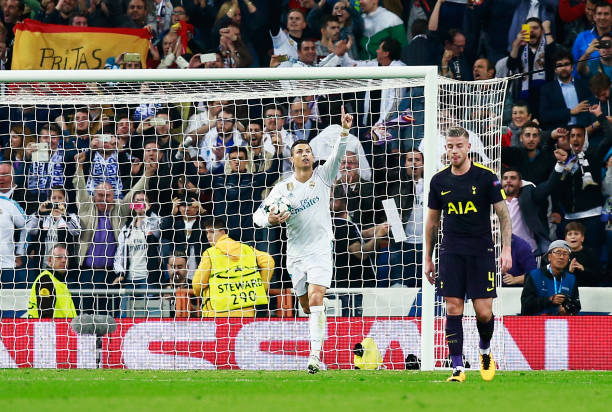 Cristiano Ronaldo’s penalty strike just before the half-time interval ensured Real ultimately earned a point during their Champions League encounter with Tottenham this evening in Group H. Hugo Lloris was forced into a number of excellent saves to keep Spurs’ hopes of more than a draw intact throughout, though they were crucially not clinical with their chances.

Real were dominant in the early stages and would’ve been good value for a lead too.

Cristiano Ronaldo’s header cannoned back off the post, with Karim Benzema snatching at the rebound – which trickled just past the far corner. Real had created a multitude of chances in the first 45, but it was the visitors who struck first.

Not according to the script, whatsoever. Serge Aurier, whose partnership down the right-hand side with Moussa Sissoko was a joy to watch, whipped another teasing delivery into the area. It took a wicked deflection off Raphael Varane as he battled with Harry Kane for possession, swerving beyond a helpless Keylor Navas.

1-0 down and the Bernabeú were stunned. After such dominance in the early stages, they had nothing to show for it.

To their credit though, they persisted to plug away in search of an all-important goal. Not only to settle their nerves, but to equally raise doubt among Spurs minds about what lay ahead in the second-half.

Aurier, who has been so heavily criticised for a lack of defensive discipline and downright carelessness at times, didn’t cover himself in glory on this occasion either. Real’s patient build-up play through midfield saw Kroos advance through with a one-on-one opportunity to beat the ever-present Lloris. Aurier panicked, lunged recklessly with a sliding challenge and didn’t win the ball.

The silky German fell to ground upon contact and the referee had no choice but to point to the spot. It was an untimely blow for Tottenham, especially given their encouraging first-half display, with Ronaldo sending Lloris the wrong way from the resulting spot-kick.

Neither sides made substitutions at the interval, though it was increasingly apparent that both teams would eventually show their hand. Pochettino, playing a 4-2-2-2 formation, set his team up to effectively nullify Real’s high-pressure tactic as well as countering their backline.

Keylor Navas was forced into making a handful of saves too, like Lloris up the other end, to deny Christian Eriksen and especially Harry Kane. The 24-year-old Englishman looked destined to score from close-range but his curled effort forced an acrobatic save by Navas, who tipped the strike just past the far post.

Achraf Hakimi impressed at right-back for the hosts with Dani Carvajal out indefinitely, while Harry Winks drew praise during a composed display from midfield against some of the world’s best players, which didn’t seem to faze the 21-year-old. 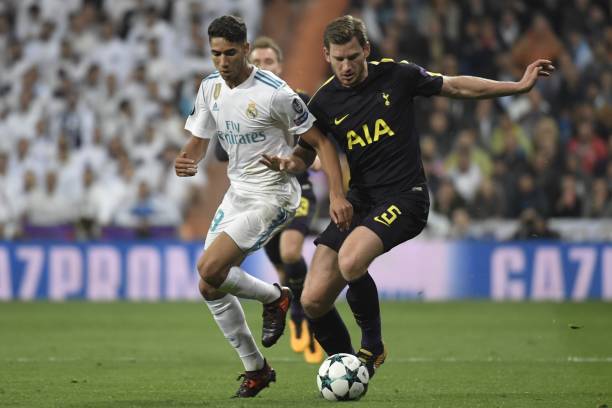 How does the group look now?

Following APOEL’s surprise 1-1 home draw against Borussia Dortmund, Real and Tottenham are sitting pretty with seven points each. It also explains why neither were content with the risks involved in search of a late winner with three more group stage fixtures to contest, though Dortmund – who were expected to do much better – only have a point to their name and look destined for UEFA Europa League football after Christmas.