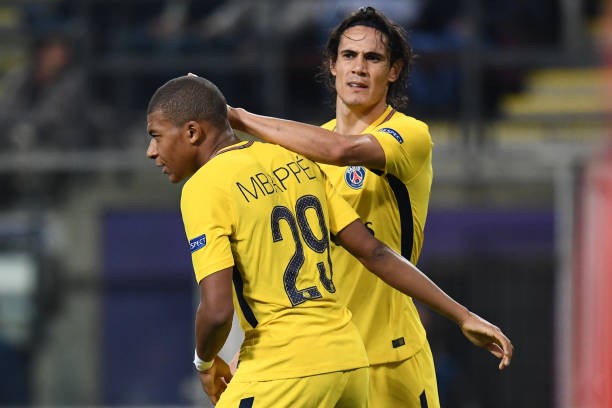 PSG’s attacking trio were influential again during a comfortable away victory, which could’ve been completely different had their hosts been more clinical with their chances on-goal. Here are the player ratings from Wednesday’s Group B fixture in the UEFA Champions League.

Only made two saves and should’ve done better for a few of the goals. Mbappé’s finish was tucked neatly through his legs but he could’ve been quicker to react and block as it was at his near post. Did well to stop the French teenager from doubling their advantage after a team-mate’s defensive mistake, but should’ve anticipated Neymar’s free-kick in time to intervene.

Provided width down the left-hand side and proved a handful for Layvin Kurzawa to deal with. Created three key passes, made three clearances and two successful tackles. However, needlessly committed a foul to halt Neymar on the edge of the area, from which the Brazilian made it 3-0 and essentially put the result beyond doubt.

His talents are clearly wasted in the centre of defence. The powerful defensive-minded midfielder was tidy with his passing as usual (93.4% pass accuracy) and made two tackles, but committed too many fouls – which PSG utilised to their advantage, continually advancing forward with pace and purpose.

A typical no-nonsense performance from Mbodji, who made a handful of important defensive interventions. If not for the Senegal international’s presence at the back the scoreline could’ve been much worse for the Belgians.

Regularly beaten too easily down the right. Seemed one or two steps behind PSG’s attacking moves, which saw him either out of position or ill-equipped to deal with players running at him with speed.

Anderlecht’s best player on a forgettable evening. Tenacious defensively, he also posed a threat going forward and created a few half-chances on his own – with more composure and better execution, he could’ve helped stir an unlikely revival. Five tackles, three interceptions, two completed dribbles and two key passes as Adrien completed the full 90. 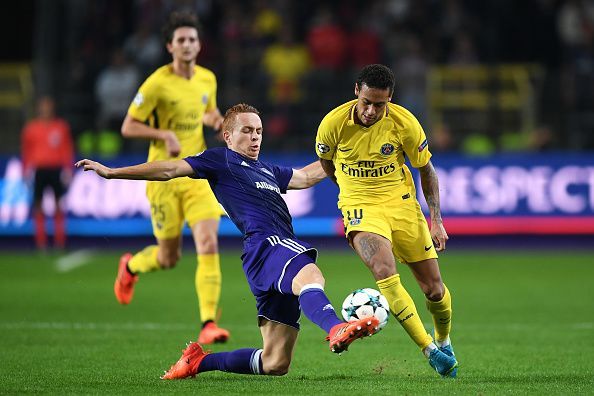 Was fairly solid in midfield before being hauled off after struggling with what looked like a hamstring injury. Came close to scoring with a strike from range in the first-half, while completing 90% of his attempted 50 passes.

Says plenty about the game that for a forward, his defensive contribution was more significant than his attack-minded ventures into the PSG area. Four tackles, an interception and a shot off-target: Gerkens will be hoping for better displays in future. He’ll look to be both sharper and more accurate in possession, as he lost the ball three times through poor control and only Sels had worse pass accuracy than his 75.9% across all starting players.

Definitely an experience that he’ll remember in future as the talented Nigerian continues to improve. Got the better of Alves on a few occasions down the flank, with his pace and trickery evident to see – but couldn’t conjure up the clinical edge to complement his abilities. Was booked for a cynical move to stop play and give team-mates brief respite, while his influence weaned as PSG’s dominance showed after the break. Hit the crossbar too but really should’ve scored. 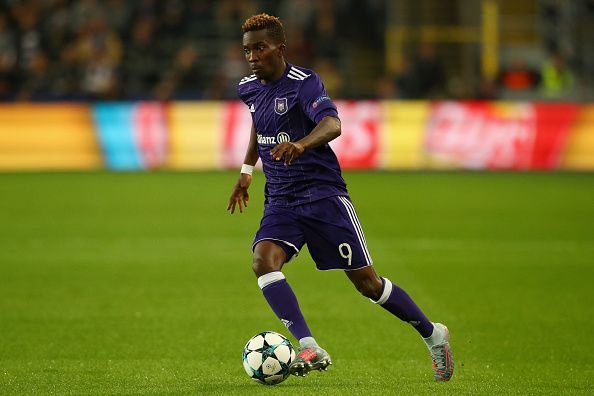 The 20-year-old winger, on-loan from Everton, impressed despite Anderlecht’s defeat

You couldn’t help but feel sorry for the Algerian at times. He regularly created space for himself but was not spotted by team-mates quickly enough during moments where Anderlecht themselves looked threatening. Wasn’t afforded the freedom to create chances of note in the final third either, instead focusing on defending out of possession for sustained periods.

Did the best he could with limited service. Battled hard – especially in the air – and was harshly booked for an accidental collision with Marquinhos in the second-half. Was regularly isolated alone up-top but still helped to pose a few pressing questions of PSG’s backline without key figure Thiago Silva.

A Champions League debut to forget for the Portuguese defender, who was called upon to replace Kums, who hobbled off. It was his weak sliding challenge which set substitute Angel di María through one-on-one with a golden opportunity to finish and add PSG’s fourth.

Effortlessly weaved past two PSG players on the edge of the box to strike goalwards, but watched on as his swerving effort flashed past the far post. Didn’t have much time to do anything more though.

Didn’t have enough time to earn a fair rating. Came on (88′) just before full-time.

Was forced into making a handful of important saves, earned his clean sheet. Should stand him in good stead for tougher opposition to come in future.

Onyekuru regularly had him beaten during the pair’s duels for possession down the flank. However, his crossing was accurate and he never shied from the ball as usual.

In Thiago Silva’s absence, the 22-year-old has proven to be a mature and equally disciplined replacement for someone so young. Didn’t have much to do but did his job well, though he’ll be keen to keep his individual foul count down in future.

Dominant in the air and strong defensively, the Brazilian knows he’ll have harder tests later but came through unscathed. A whopping nine clearances and four aerial duels won means he was just better than his French centre-back partner.

His passing was slack and laboured in the first-half, but as PSG grew more dominant, Kurzawa’s confidence grew. As a result, he accelerated forward regularly and didn’t need to worry too much about his defensive duties. Won six aerial duels and completed three tackles during the 90 minutes.

Still going strong at 35, the Italian’s presence was quietly important as he helped to avoid potentially dangerous attacking situations when Anderlecht looked to counter quickly. Made two clearances and interceptions, whilst avoiding a potential sending off after a cynical challenge, before being replaced for Julian Draxler with 20 minutes left.

A decent game for the Frenchman, who grew into proceedings as the match continued. Did well to carry the ball forward and draw fouls, while showcasing his confidence to dribble toward danger areas.

The 24-year-old is a joy to watch. Manages to manoeuvre past opposition challenges as if they’re not there, he was again a composed operator in midfield who kept things ticking. Regularly looking forward after impressive defensive work, he created three key passes and assisted Mbappé early on too. 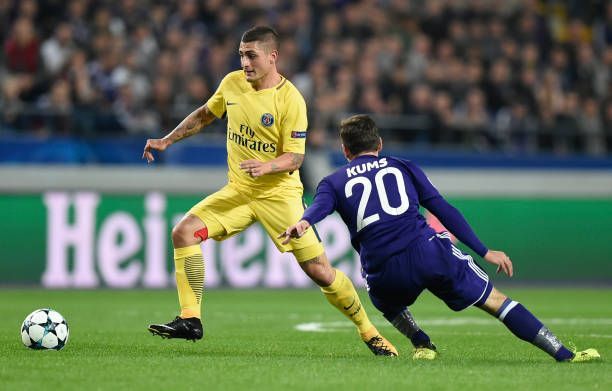 Verratti was excellent in possession and equally strong defensively.

With every passing match, you can just see why Mbappé is the extra dimension that PSG have been looking for. Able to unlock defences with his electric movement and sharp turns of acceleration, he broke the deadlock and was unselfish enough to head the ball towards Cavani’s path before the interval. Works hard to create chances and hit the crossbar too, though could’ve also had a hat-trick to his name if he showed more composure here.

Hit the woodwork, had two goals correctly ruled out for offside and still managed to score. All in a day’s work for the experienced Uruguayan, who will deep down be frustrated that he didn’t add to his tally given the plethora of chances that were created.

Another quality display from the Brazilian, but one where he could’ve done better. Scored with a deft free-kick but should’ve netted twice beforehand. Completed nine dribbles and was fouled on four occasions, though could have done more to retain possession as he lost the ball plenty of times too. 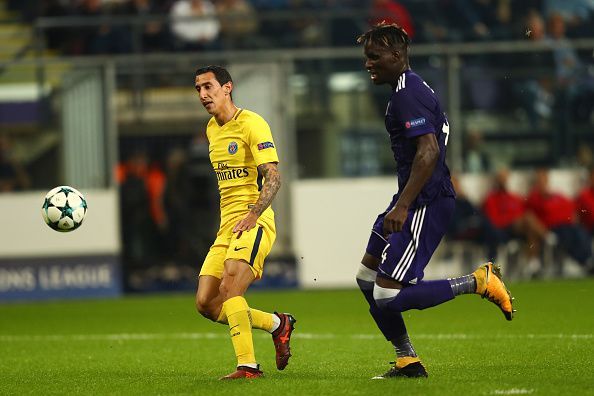 di Maria’s cool chip was enough to seal a comfortable away victory late on.

Must be wondering what more he can do to get into the side. Kept things moving in midfield after replacing Motta, completing three dribbles and creating a key pass during his 20-minute spell.

Didn’t do much of note during the time he was on the pitch. Made one tackle and had the ball upon occasion but nothing spectacular.

Scored PSG’s fourth with a deft chip late on but his celebration afterwards told the story – he wants more minutes! Certainly going the right way about doing so.