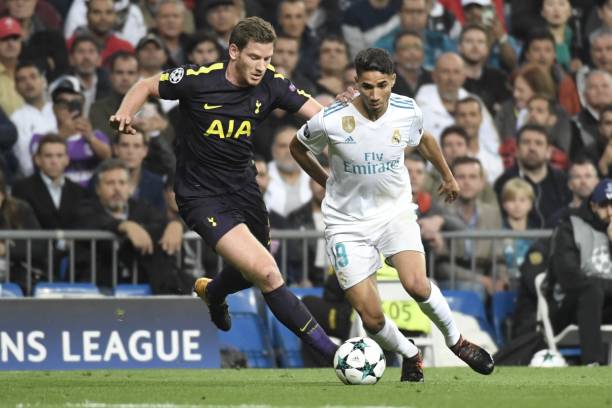 Achraf Hakimi turns 19 in a few weeks time, and the Madrid-born Morocco international has been called upon at a time of need for Real. Already, it appears he’s up to the challenge with right-back Dani Carvajal sidelined indefinitely after a heart condition was recently discovered.

When one of the world’s best full-backs, a mainstay within your side, is suddenly unavailable through no fault of the player nor club in question, you’d usually have an adequate replacement ready to step in.

Real, who have been praised for managing to sign quality in depth whilst keeping them all content, have granted a rare opportunity for a youngster to step up.

Hakimi was promoted into the senior ranks this past summer with Danilo’s departure increasingly likely at the time. He made pre-season appearances against MLS All-Stars and Serie A side Fiorentina but wouldn’t have expected to feature among Zinedine Zidane’s first-team plans so quickly afterwards in competitive action.

Fast forward three months, he’s already made his La Liga and Champions League debuts, and critics and supporters alike have begun showering his performances with praise. He started and performed well during their victories over Espanyol and Getafe, fixtures that Los Blancos typically are expected to dominate and win convincingly, it’s fair to say that his transition into Spain’s top tier was a smooth one.

With seven tackles, six clearances and three interceptions across the two domestic games, Hakimi had his hands full. Crucially, though, it didn’t stop him from venturing forward from time-to-time – four completed dribbles, a key pass and plenty of touches (160), to boot.

With that in mind, he knew that tougher tests of his defensive abilities were still to come. Tottenham at the Bernabeú would be the first, an intriguing challenge for his maiden continental appearance.

After his display in midweek, Hakimi’s profile has already risen significantly; he did his reputation – and that of Castilla players in his age-group – no harm in the process. Tasked with nullifying Christian Eriksen’s threat in midfield while proving a nuisance for Jan Vertonghen down the flank, he did fairly well.

He drew two fouls, made a handful of defensive contributions when called upon and was tidy once more with his passing.

Strengths, weaknesses and looking to the future

Hakimi is a youngster comfortable on the ball but one who equally has high pass accuracy statistics. He can play further forward as a right-sided winger and has shown attacking tendencies in short bursts. However, he also appears eager to impress – what better way to do that then, than consistently performing well defensively.

Those types of displays are more important than fullbacks who prefer to maraud forward regularly and can abandon their defensive responsibilities.

Strong for a player of his size – who still has time to physically mature – he is a good reader of the game. Regularly seen making interceptions, clearances or defensive interventions by being in the right place at opportune times, it’s no coincidence.

One of the main weaknesses within Hakimi’s game is his decision-making, once he advances into the final third, with regard to delivering crosses and retaining possession. He has a tendency to be dispossessed if he keeps hold of the ball too long down the flanks, which is then a dangerous situation to defend against – potentially getting countered.

His crossing is inconsistent and definitely an area of his game that needs work before he can continue to whip balls into the box. With that in mind, it makes sense that he’s often keen to recycle possession by passing across to another senior team-mate, as opposed to losing it high up the pitch.

Carvajal himself is still only 25 and should everything go well during his recovery, will probably return to take his right-back slot once more. It’s important therefore that Hakimi, regardless of how frustrating it may be, decides to have patience and makes the right career decision which will ultimately benefit him in the long-run.

Whether that be competing as the Spaniard’s understudy, to play in cup competitions and be a rotation player. Or alternatively, request a loan elsewhere – potentially in Spain’s top tier – with the prospect of regular first-team football too enticing to ignore.

It’s refreshing to see youngsters given a chance and Hakimi could start a trend which sees the club shy away from acquiring mass squad players from across Europe when they have academy products of a similar ability level.