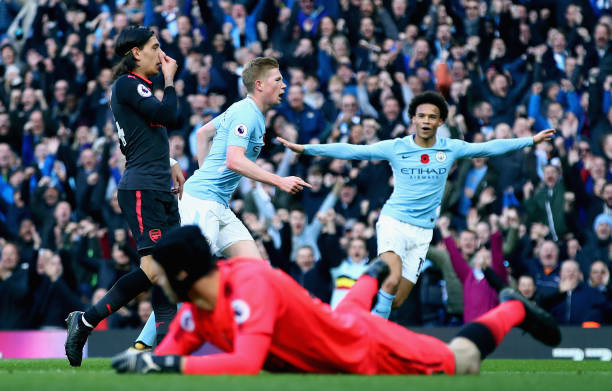 Goals from Kevin de Bruyne, Sergio Aguero and Gabriel Jesus sealed an important home victory for Premier League leaders Manchester City before the international break, despite Arsenal’s best efforts at the Ethiad. Alexandre Lacazette halved the deficit midway through the second-half but a handful of contentious officiating decisions hurt the visitors’ hopes of a good result.

Olé, olé, olé. The noise reverberated around the ground and Arsenal players were quite simply being bypassed. Quick passing, dribbling with freedom, you almost couldn’t believe this.

Many critics have suggested this current City side are on course to become one of the best in history. Against one of their rivals, they were comfortable in possession and equally looked threatening every time they advanced forward with pace and purpose.

However, this wasn’t always the case in this fixture. They didn’t start in such convincing fashion at all, instead the visitors were the better side. Buoyed by the occasion, it was a must-win game to justify their credentials against better opposition.

Then, they dropped off. City had a sustained spell of possession, looked comfortable and eventually found their reward.

Raheem Sterling’s threat down the right-hand side was effectively quelled by Sead Kolasinac, though the Bosnian’s resulting clearance was only partially cleared. Arsenal players were jogging out of possession and didn’t seem in any real hurry to win the ball back – City took advantage and fashioned two opportunities in quick succession.

de Bruyne’s first effort was parried away by Cech, but after the hosts recycled possession, the Belgian found himself open in space on the edge of the box. Fernandinho teed him up and after shifting the ball onto his weaker foot, he rifled low and hard beyond Cech into the bottom corner. 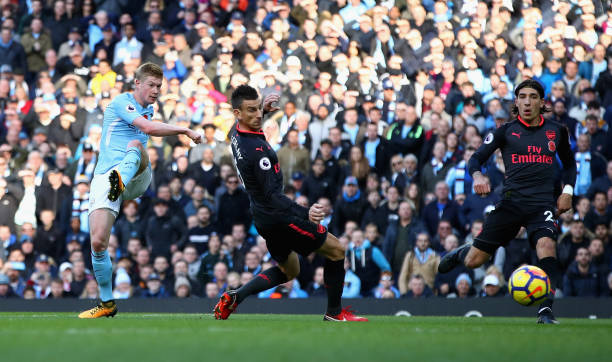 1-0 up and complaints couldn’t really be made. It’s always interesting to see how Arsenal respond in difficult situations, this one was no exception against the champions elect – a team they were hoping to rival for Premier League success.

Laurent Koscielny seemed the only player that looked determined enough to do so, as his resolute defensive display kept the scoreline at 1-0 with City pressing for a few more goals.

Sterling had an opportunity to create City’s second, either by teeing up Leroy Sané to his left or going for goal himself. Koscielny, as the last defender, did well to apply enough pressure on the Englishman to create doubt in his mind – indecisiveness saw the ball trickle out of play with a goalscoring opportunity squandered. 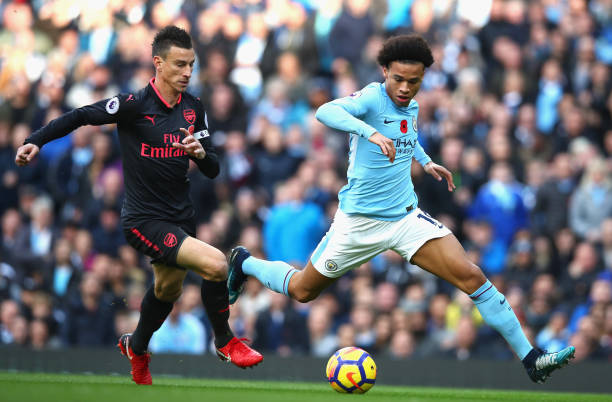 Francis Coquelin did well on a handful of occasions with accurate challenges, interceptions and defensive actions, despite City being eager to expose his lack of confidence on the ball.

At the interval, the hosts were 1-0 ahead but could’ve already had the game wrapped up. They were that dominant, in terms of chance creation – Arsenal’s attacking spells were few and far between.

Testing times after the break

City soon doubled their lead, after the second-half got underway. Arsenal are often their own worst enemy and Nacho Monreal was at fault, giving away a needless penalty on Sterling when he just needed to continue containing his threat. 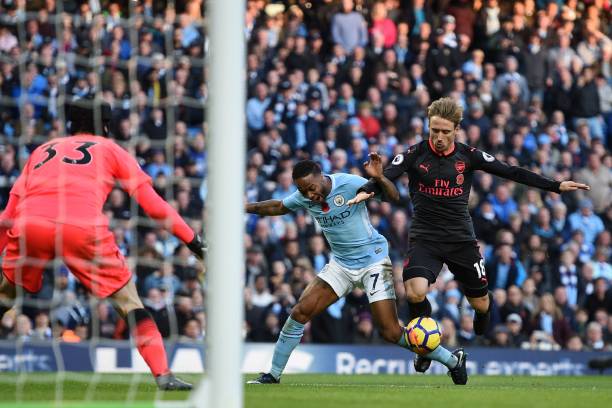 Needless: Monreal (R) bundled Sterling over in the box and despite questions over whether it was a soft spot-kick, the Spaniard didn’t need to make the challenge. (Picture source: Oli Scarff / AFP / Getty Images)

Aguero stepped up and made no mistake from the spot, watching his strike wrong-foot Cech and cannon in off the post to double the hosts’ lead. Something needed to change and fast. City’s momentum was building while Arsenal were losing possession far too often to build-up effectively through the various phases of play.

Alexandre Lacazette, a surprise omission from the starting eleven on this occasion, was introduced with half an hour to play. Lacazette’s compatriot Coquelin was replaced, as the Gunners went in search of a spark to bring their play back to life.

Aguero meanwhile was given a hero’s reception after being withdrawn for Gabriel Jesus. The talented Brazilian could’ve got himself on the scoresheet too, but saw his close-range strike thwarted with an excellent reaction save by Cech.

Lacazette’s game-changing impact off the bencH

Then, it was time for Lacazette to stamp his authority on the game. Patiently waiting for an opportunity in the final third, he was regularly in space but had to bide his time and remain spatially aware. Doing so to devastating effect, it was Aaron Ramsey’s pass into his path which set him with a one-on-one chance to beat Ederson.

He did exactly that, slamming hard and low through the goalkeeper’s legs to halve the deficit while providing hope of an unlikely comeback. Despite their attacking prowess, City are still unconvincing at the back – so keeping a clean sheet here would’ve been surprising. 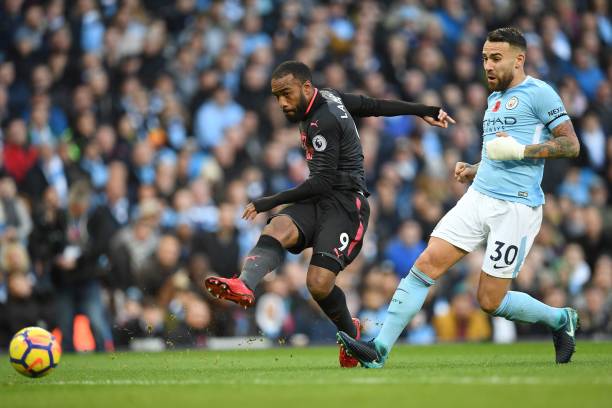 One for more: Lacazette, who was surprisingly a substitute here, netted his sixth league goal of the campaign to temporarily halve City’s deficit. (Picture source: Paul Ellis / AFP / Getty Images)

But Arsenal’s hopes were quickly extinguished, in contentious fashion. David Silva was in an offside position when he’d received the ball down the right-hand side. The linesman, whose view was not blocked, didn’t lift his flag and Arsenal players all stopped playing – expecting him to signal the offside call instead.

As a result, Silva was allowed the time and space to pick his pass with Jesus in the box. Having missed from close-range earlier, there was no defensive pressure on him here – so he converted to restore City’s two-goal cushion.

Harsh on the visitors, yes. But they shouldn’t have stopped playing and probably would’ve defended the chance too if they didn’t.

City were now comfortable with their cushion intact once more and despite Arsenal’s intensity refusing to drop as Jack Wilshere and Olivier Giroud were introduced late on, they couldn’t create enough going forward to really threaten Ederson much more.

Iwobi’s slack pass, Monreal’s needless challenge and an offside call were the three goals that Arsenal conceded. Sure, City should’ve scored a few more but when you isolate their mistakes like this, defeats are even harder to take from a Gunners perspective.

It’s their fourth league defeat of the campaign and this is only matchday 11. There’s an international break to come with World Cup qualifiers, friendlies and the like but while some questions have been answered, others remain.

City are eight points clear though United have a game in hand, against Chelsea later this afternoon. Following Liverpool’s 4-1 win over West Ham yesterday, the Gunners find themselves in 6th place, the same position they finished last term.

Regardless of the result from Stamford Bridge, the gap between 2nd and 7th place will be only six points after today is complete. Competition for points continues to intensify but after performances like these, it’s hard to see anyone but City win the Premier League this season.