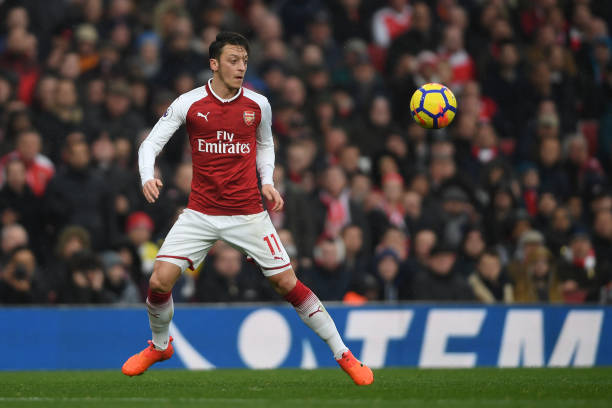 Recent reports suggest that La Liga giants Barcelona are interested in making a formal approach to convince Arsenal midfielder Mesut Özil to join them in January or once the current campaign finishes.

The 29-year-old creative maestro has spent the last four years in north London and is yet to sign a contract extension with Arsene Wenger’s side, prompting speculation about his long-term future and where he’ll be in next season onwards.

His current deal expires next summer and as a result, he’ll be free to talk to clubs overseas as early as January 1 about potential deals to be concluded once this 2017/18 campaign is finished.

Wenger himself has said on a number of occasions that the futures of both Özil and Alexis Sánchez will be clarified later in the season and not January, but it looks increasingly likely that one – if not both – will leave at some stage in the coming months.

Currently on £140,000-a-week, the silky German has often been criticised for a perceived lack of effort defensively but in recent months, appears to have silenced critics and supporters alike by excelling in the final third.

No player has created more chances than him since joining England’s top flight from Real Madrid in a then club-record move on deadline day in 2013. He’s undoubtedly their creator-in-chief and one that the Gunners would benefit from extending his existing deal.

Barça themselves were heavily linked with, and have an ongoing level of interest in Liverpool playmaker Philippe Coutinho – who is four years younger than the Germany international.

However, issues around Liverpool’s asking price, believed to be £130m, meant a deal could not be agreed before September’s deadline.

Özil would be available to play in the Champions League as Arsenal are currently in UEFA Europa League competition, whilst Mesut himself is yet to feature in the tournament.

If they make a tempting offer and he makes increasingly clear that he wants to join, they could potentially sign him for a fraction of his market value. Or, they may form an agreement for his services to join on a free transfer in July.