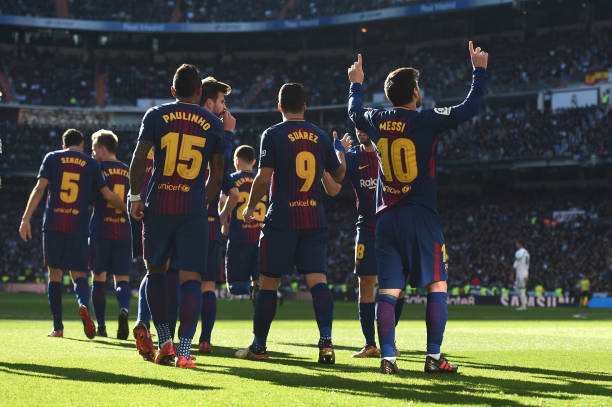 Lionel Messi once again proved why he’s already been lauded as the world’s best ever player with a superb individual display to help Barcelona to a comfortable 3-0 away win over rivals Real Madrid away from home. Luis Suárez and substitute Aleix Vidal were also on the scoresheet, as the defending champions were humbled at home just days before Christmas.

Post-match, manager Ernesto Valverde was keen to stress that the title race is very much still on. But with an 11-point gap between themselves and second-placed Atletíco Madrid – who lost to Espanyol on Friday evening – it’s hard to envisage a recovery from either Madrid outfit after the impending winter break.

Both sides started in fairly tentative fashion, as neither wanted to make an early mistake which could easily have set the tone at the Bernabeú. Ronaldo’s headed effort cannoned in off the crossbar after just two minutes, but to the disappointment of Madridstas everywhere, the fourth official had his flag correctly raised for an offside decision.

The 32-year-old’s frustration in the opening exchanges was evident and ultimately proved pivotal later on, as he lacked the composure to apply the finishing touch after finding himself in space to shoot from close-range. 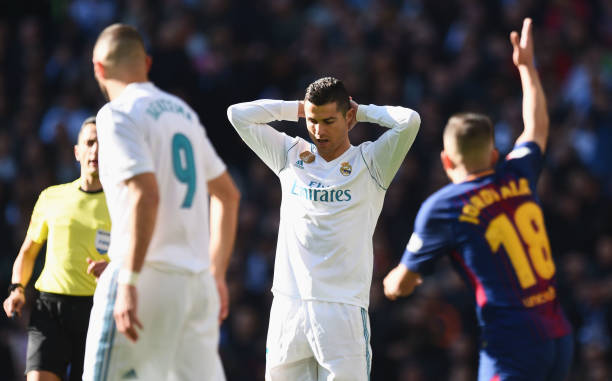 MADRID, SPAIN – DECEMBER 23: Early warning signs as Cristiano Ronaldo (C) reacts in frustration after squandering an opportunity against Barcelona at the Santiago Bernabeu on December 23, 2017 in Madrid, Spain. (Photo by Denis Doyle/Getty Images)

It was an early warning sign for the visitors, who themselves were fairly comfortable in possession and Real had allowed them ample opportunity to get involved – even with the danger of a counter-attacking move up their sleeve.

Commentators were beginning to wonder when it would be time for Messi to sprinkle some magic in a hotly-contested battle and unsurprisingly, they did not wait long. On the half-hour mark, the Argentine delivered an inch-perfect through ball pass into the path of Paulinho, who evaded Sergio Ramos before shaping to shoot.

It was always going to be tough, especially mid-run, but he forced a crucial acrobatic stop by Keylor Navas to tip his effort over the crossbar.

Not to be undone, Marc Andre-ter Stegen, who has been one of Barcelona’s best players this term, performed similar heroics at the other end just a minute afterwards to keep the scores goalless.

Ronaldo darted his way into the box, having cut inside from the left-hand side. Sergi Roberto did well to stick with him but could not do enough to block his strike, as it fizzed powerfully across him towards goal. It looked to be a certain goal too, if not for the German’s excellent reflex save – down low and quickly to thwart Cristiano with an outstretched leg, the match was finally hotting up.

Paulinho came close once more before the half-time interval before Karim Benzema, heavily criticised by the media and supporters alike, saw his headed flick ricochet off the far post.

It was a devilish ball into the box by Marcelo, who swung an inviting delivery and one you would have expected the Frenchman to convert from close-range. He beat Thomas Vermaelen in mid-air to the cross, but hitting the post typified his luck – a distinct lack of it in recent months.

However, this was never going to be a goalless affair. Just nine minutes after the restart, Barcelona found themselves in-front and did so with the type of ruthless efficiency Real have taken pride in displaying over recent seasons.

Ivan Rakitic marauded forward with the ball at his feet. After a mix-up between Croatian midfield pair Mateo Kovacic and Luka Modric, their compatriot was afforded far too much space and time to accelerate forward towards the final third.

He scanned his options and passed across into the path of Roberto, in a promising position. Súarez’s probing run had already been spotted by the Spaniard, who made no mistake in releasing the former Liverpool man. From around ten yards out, Luis coolly picked his spot and left Navas helpless with the deadlock finally broken.

But it was not over there, far from it. He could’ve added another just minutes afterwards, but watched in frustration as his effort – from a tight angle it must be stressed – kissed the side netting as opposed to the back of the net. 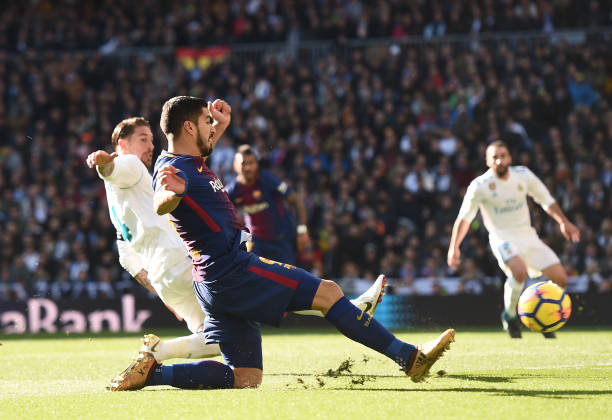 Close but no shave: Súarez could have doubled his tally and that of Barca’s, but watched his effort flash narrowly wide of the far post. (Picture source: Denis Doyle / Getty Images)

Real were lax out of possession, slow in transition and there for the kill. It was time to finish this, put the game beyond reasonable doubt. That’s exactly what Barcelona did.

Another fast counter-attacking break saw a goalmouth scramble ensue before Súarez’s effort bounced back off the post into Paulinho’s path. With a rush of blood to the head while eager to prevent his side from going further behind, Dani Carvajal instinctively blocked the Brazilian’s goal-bound effort with an acrobatic save of his own.

The referee had no choice but to give Carvajal his marching orders, a straight red card and his first in four seasons with Los Blancos. Lionel Messi slammed home in style from the spot, netting his 15th league goal of the campaign thus far, but chances continued to flow despite Real’s numerical disadvantage.

Ramos and substitute Gareth Bale, only fit enough for a cameo appearance here, both came close in the latter stages. ter Stegen remained firm though and earned his clean sheet, while Messi was again influential as he danced past Marcelo before teeing up an unlikely figure in Aleix Vidal to put the icing on the cake for Barcelona. 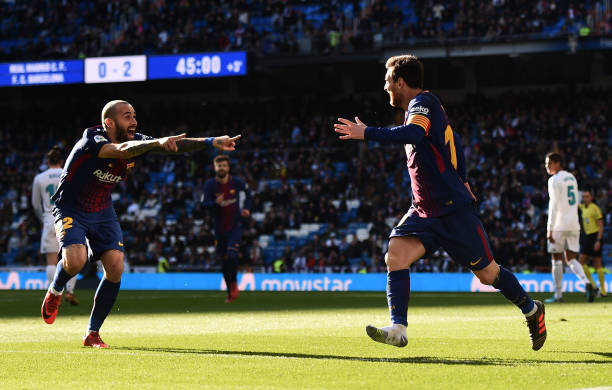 MADRID, SPAIN – DECEMBER 23: Aleix Vidal celebrates with creator-in-chief Messi after netting late on, putting the icing on the cake during an efficient Barcelona performance against their arch rivals Real Madrid on December 23, 2017 in Madrid, Spain. (Photo by Denis Doyle/Getty Images)

A 3-0 away victory against the defending champions. Considering just how much pressure and scrutiny Barcelona found themselves under back in August, this result does not get more emphatic.

It was a tactical battle in the first-half, but one the players embraced. They soaked up pressure well and hit Real where it hurt most, doing so with an aura of confidence that many believed would be gone without Neymar’s presence in attack.

Ousmane Dembélé is set to return from a long-term injury next month while Liverpool’s Philippe Coutinho continues to be linked with a switch, so perhaps performances like these highlight some critics’ naivety.

As for Zinedine Zidane and his Real side, it’s clear that major works needs improving as they’ll look to recover accordingly. We’re only halfway through the campaign and already, Real will be longing for the Champions League to return as they aim to respond in the best possible way.