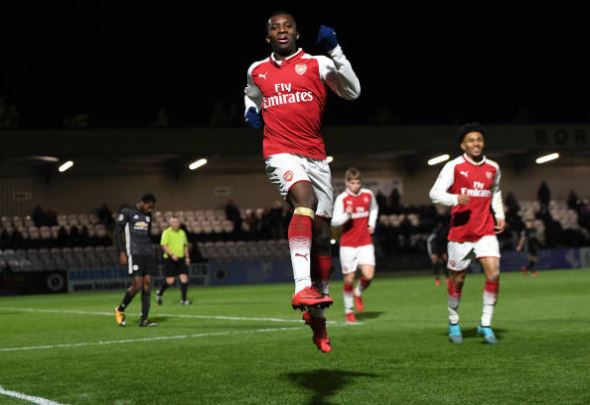 Reiss Nelson was the catalyst for creation in the final third while Edward Nketiah netted a brace during Arsenal u23s’ 4-0 home victory over Manchester United this evening.

It was a comfortable win in the end, and one where the Young Guns could’ve easily double their four-goal tally if not for a combination of goalkeeper Theo Richardson and somewhat wastefulness in-front of goal.

Jeff Reine-Adelaide broke the deadlock after 20 minutes, a deserved reward for an enthusiastic start to the game from the Frenchman. It took a deflection on the way through but unfazed, the creative midfielder continued his assault on the United goal and came close to doubling their tally after being threaded through by Nketiah.

Richardson was alert to the danger and thwarted him accordingly, before Reine-Adelaide then headed over the crossbar from Jordi Osei-Tutu’s inviting delivery. Arsenal were undoubtedly in the ascendancy at this point, working well as a team whilst retaining possession well and making their visitors work extra hard to sustain a foothold in the match.

On his u23s debut, new signing Konstantinos Mavropanos was fantastic defensively. You could see why Arsene had spoken so highly of him in recent pressers, as he was both comfortable in possession and equally utilised his physical presence to good effect. Aerially strong and composed too, he oozed confidence which ultimately helped team-mates trust him. 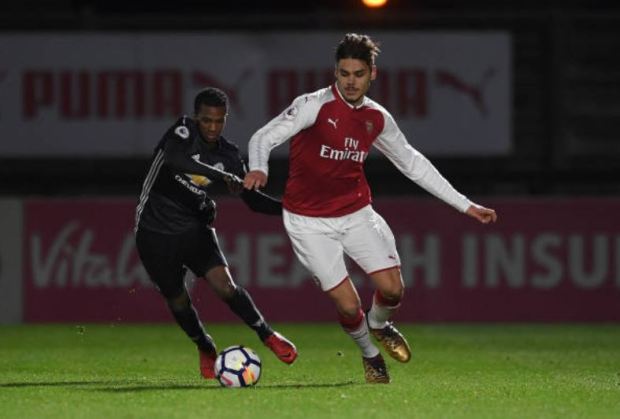 The composed youngster, signed earlier this month, impressed during Arsenal’s comfortable victory and was dominant in possession from the back. (Picture source: Getty Images)

Matt Macey was forced into only two saves, one from Josh Bohui and another from a dangerous free-kick in the first 45. For Arsenal’s dominance, a one-goal lead wasn’t much to show for it – so they finally made it count after the interval.

Vlad Dragomir was being deployed in an unfamiliar position at left wing-back but made good use of the space ahead of him to attack down the channels. He doubled the lead with a well-taken finish, but Arsenal’s assault was far from over.

Emile Smith-Rowe replaced the impressive Reine-Adelaide, as United struggled to keep up. Nketiah showed his acceleration in abundance by beating his marker and leaving him for dead in the same move, bursting through towards goal from the halfway line. He ensured that on this occasion, his hard work was not undone by another save or squandered opportunity – before Nelson’s probing pass into the teenager’s feet allowed him to complete his brace just minutes later.

After this result, Arsenal find themselves four points off Premier League 2 leaders Liverpool. There’s still plenty of work to be done to continue challenging for top spot but this display was particularly pleasing – not least because it was being televised on the club’s official website.

Mavropanos had a debut to remember, Nelson and Nketiah’s link-up play was evident for all to see while Sheaf, Reine-Adelaide and Dragomir were all impressive too. Next up for Steve Gatting’s side is a Premier League International Cup group stage fixture against Bayern Munich at home, but they’ll undoubtedly go into that game with confidence they can earn all three points.

After a collective display like that one, the sky’s the limit.