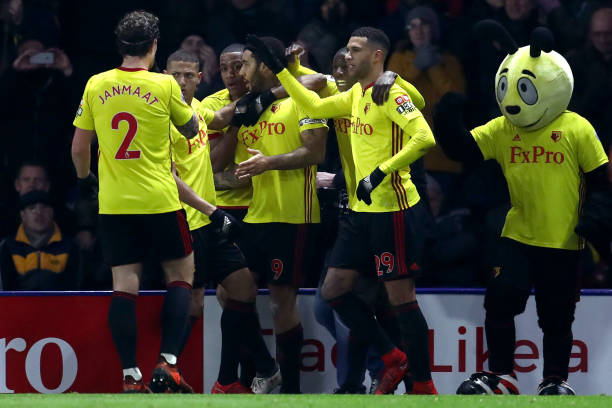 In a match both sides needed to win, a gutsy Watford prevailed after Troy Deeney’s well-taken penalty on the stroke of half-time. Chelsea for all their quality, had a numerical disadvantage for an hour after Tiemoue Bakayoko was dismissed after two sloppy bookings in five minutes and struggled to contend with the hosts’ continuous pressure as time wore on, before an action-packed ten minute spell where four goals were scored. 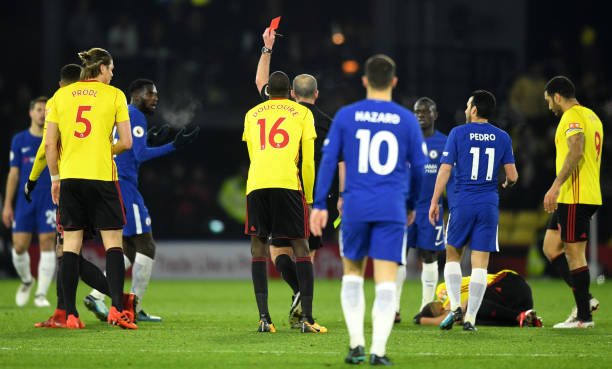 To say Chelsea, or Watford for that matter, have struggled in recent weeks would be an understatement. The Hornets’ poor form saw highly-rated Marco Silva lose his job while Antonio Conte, who won the Premier League with the Blues last May, is reportedly next for the chop.

So the two London rivals were always going to conjure up an intriguing clash at Vicarage Road here – not least given Watford’s high-energy start and just how they startled the travelling Blues.

Gerard Deulofeu has been honest with himself and his inconsistent displays at Everton – where he flattered to deceive, despite having such high potential and clearly the Spaniard has a point to prove in England’s top-flight. Having joined on a loan spell from Barcelona last week, he’s keen to excel and started brightly on this occasion too – as did Richarlison, who has been Watford’s best player this term – bar one Abdoulaye Doucoure.

It seemed almost typical that the match would start in such feisty manner with David Luiz’s inclusion, his first Premier League start since mid-October, as part of a central defensive pairing which doesn’t particularly offer much confidence nor stability despite Cesar Azpilicueta’s reliable presence at the back.

Bakayoko has struggled to settle in seamlessly as many would have liked at Chelsea, this performance typified his issues. Poor passing, failing to retain possession and equally clumsy without the ball, it was a forgettable half-hour before being dismissed – both bookings were needless and without malice but caused by Watford’s non-stop press whenever he had the ball at feet.

Buoyed by this, the Hornets drove forward with extra vigour and earned their reward for an excellent first-half. Daryl Janmaat’s probing through ball down the flank fed Deulofeu, who sped past Gary Cahill and invited the oncoming Thibaut Courtois to challenge him for the ball.

Contact was made, Deulofeu went down and earned a spot-kick, one that Deeney made no mistake to break the deadlock from.

After the half-time interval, Chelsea were gradually becoming more impatient in search of the equaliser to get themselves back in the match. Bookings were being brandished left, right and centre as the visitors were frustrated by their collective performance and seeming inability to do much to rectify it.

Richarlison and Deulofeu both came close to doubling the hosts’ lead before the former was substituted, but Watford’s cushion was not a comfortable one.

On came Olivier Giroud, making his Chelsea debut, but it was unlikely that he’d receive much service in the final third given just how Watford players were swarming their London rivals out of possession.

17 goals from the substitutes’ bench, Giroud has netted the second most in history behind Jermain Defoe’s 23 – but was unable to add to his impressive tally on this occasion.

Their best attack of the game fell to Cesc Fábregas in the area, but he squandered the opportunity and goalkeeper Orestis Karnezis was able to thwart the Spaniard from close-range.

Then, the game suddenly burst into life. Shades of Watford’s 2-1 home defeat by Swansea were again rearing their ugly head when Eden Hazard curled an excellent strike into the bottom corner from seemingly nothing.

1-1, game on. Only momentarily, mind. Instead of revert to their shell, Janmaat’s surging run forward prompted a quick-fire goal fest from the hosts – the Dutchman danced his way into the Chelsea box before showing composure to coolly slot home from close-range.

Deulofeu, who probably should have netted a hat-trick in truth, did similar with a deflection off Cahill’s attempted block, before substitute Roberto Pereyra put the icing on the cake with a well-taken strike beyond a helpless Courtois to make it 4-1.

Watford have won their first match in 14 recent meetings with their London counterparts, the last coming in a 1-0 Premier League victory back in September 1999.

Chelsea’s seven red cards is only eclipsed by Grimsby Town’s eight across all competitions this season as the most within England’s top four divisions, while the defeat is the first time they’ve lost consecutive league games by a margin of three or more goals since October 1995 (4-1 against Manchester United and 3-0 v Blackburn).

When you’re crunching numbers like these, it’s clear to see that they’re very alarming and you can understand why Conte and his players alike have been under increasing levels of scrutiny this term.

Their 3-0 home defeat by Bournemouth last time out was a surprise, but the performance was equally a disappointing one. On this occasion, it was the same outcome and an even poorer display by the defending champions – who have an air of Mourinho still lingering after such a feeble title defence.

Watford will be hoping that this is the start of something new under Javi Gracia, there’s still plenty of work to do but after a tough away draw against Stoke last weekend, things are beginning to look up for the Hornets.

Deulofeu, once he settles, is likely to combine well with Richarlison going forward. Doucoure was immense again as usual in midfield, while Deeney – heavily linked with a move away last month – was a real presence for Chelsea’s backline to deal with. Nathaniel Chalobah is still to return, but there’s definitely a window of opportunity for some players to step up under new management.