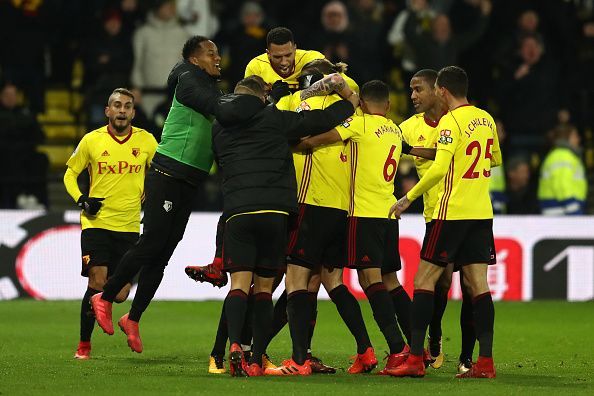 Here are five talking points from an eventful clash at Vicarage Road, as Watford thumped London rivals Chelsea in an action-packed affair.

It was a frustrating evening to forget for Antonio Conte and his Chelsea side, who were outplayed and embarrassed by their London rivals at Vicarage Road.

Troy Deeney broke the deadlock from the penalty spot after Gerard Deulofeu was hauled down by an onrushing Thibaut Courtois, before goals from Daryl Janmaat, substitute Roberto Pereyra and Deulofeu himself helped seal a comfortable victory following Eden Hazard’s curling effort to equalise with time running out.

Tiemoue Bakayoko’s first-half dismissal made matters even worse for a Chelsea side who lost consecutive Premier League matches by a three-goal margin for the first time since October 1995.

On that note, here are 5 things we learned from a big win for the Hornets:

#5 Home debut to remember for Deulofeu 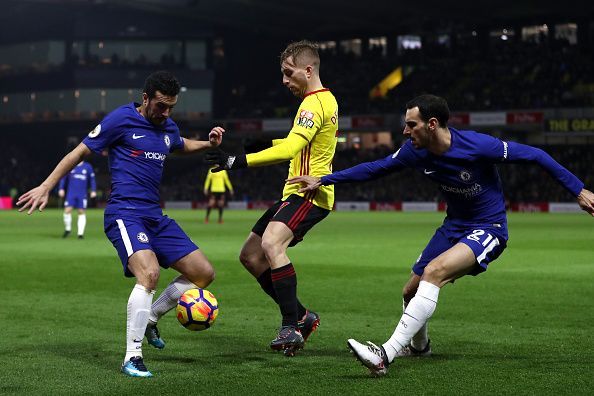 Gerard Deulofeu has been one to criticise himself, as he knows a player of his ability needs to perform well on a consistent basis. In three separate seasons for Everton on loan spells, he has displayed his world-class capability but only in brief flashes.

For someone with something to prove, it was certainly a standout performance from the Spaniard. At 23, he’s at the stage in his career where he really needs to kick on and settle into the player that he can become – but has been left frustrated by irrational decision-making in the final third.

He scored one, created the penalty and could have had a hat-trick, in truth! But for some poor finishing on his part, as well as lacking composure in the rush of the moment.

A constant threat going forward, his blistering pace and tricky dribbling style always prove menacing for defenders to contend with – it was the same case on this occasion against a Chelsea backline who have struggled recently to keep clean sheets.

The Spaniard won the Man of the Match award for an electric display, it’s definitely the platform he’ll be looking to utilise going forward in future from now until the end of the season. Who knows, maybe Javi Gracia’s post-match comments are right and he could earn a surprise inclusion as part of Spain’s World Cup squad. Has to remain consistent, though. 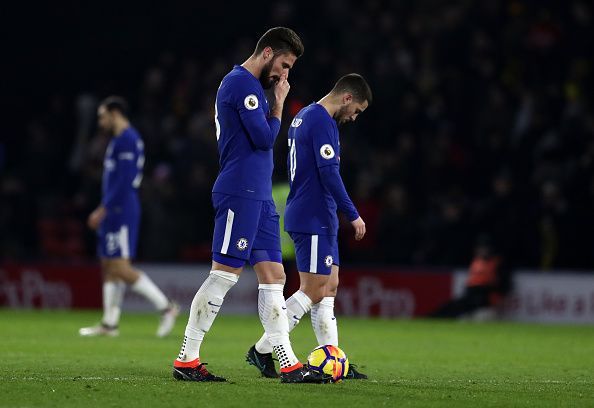 Tough times for the men in blue

It’s not been a good week for Chelsea, for players and supporters alike. After their surprise 3-0 home defeat at the hands of AFC Bournemouth in midweek, they broke an unwanted record by losing consecutive Premier League matches by a three-goal margin for the first time since October 1995.

It’s the type of statistic that will not fill Antonio Conte or, perhaps more importantly, Roman Abramovich, with any confidence that the current direction is a productive one – not least given their inconsistent form this term.

They’ve only won one league fixture – 4-0 against strugglers Brighton – to start 2018, with an eye-watering five draws across all competitions since their 1-0 away defeat by fellow Londoners West Ham back in early December.

This defeat was their first against Watford (across all competitions) since September 1999, ending a 13-match unbeaten run – while only Grimsby Town (eight) have been shown more red cards in English football this season than the Blues following Bakayoko’s first-half dismissal here.

#3 Bakayoko blasted after another poor display 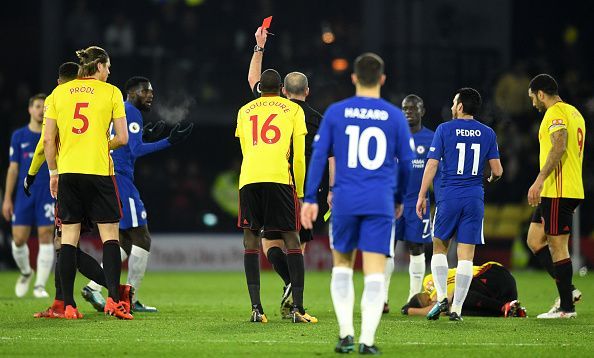 An expensive flop, waste of money and a player who must be dropped immediately. These are just a few of the things that have been thrown in the Frenchman’s path, after a stuttering start to his career in England.

After a performance like this one, Tiemoue Bakayoko is not helping himself nor his chances of being a long-serving player at the club either.

His passing, both over short and long distances, has been fairly inaccurate and frustratingly halts counter-attacking moves. You can almost hear fans groan once he gets on the ball, as if they already know that it’s been lost.

He was given his marching orders after two needless fouls in the space of five minutes, which not only reflects poorly on his discipline but equally, on his footballing intelligence – knowing fully well that he’s just been booked, perhaps avoiding diving into challenges?

If you watch replays of both fouls, you could very well argue that the pair were soft and self-inflicted after Watford continually pressed him whenever he had possession. It comes with the territory though and the 23-year-old’s carelessness cost him big time here.

Seen as a £40 million upgrade on the departing Nemanja Matic, Bakayoko has plenty of potential to fulfil but appears to be a confidence player, one that perhaps needs time away from the spotlight to reflect and reassess where he must improve in future. 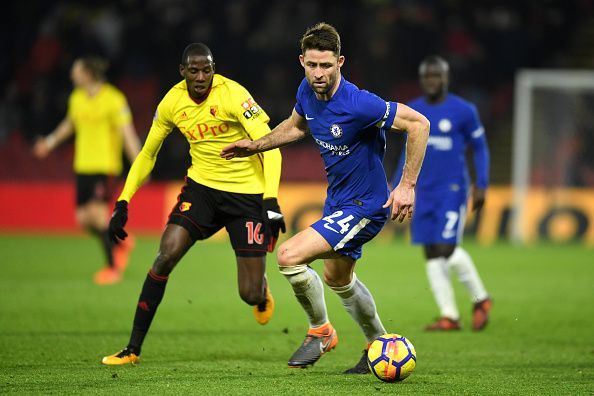 Watford’s faltering form towards the latter stages of Marco Silva’s tenure were clear to see – but there were arguably two key players who both continued to perform whilst others struggled.

Richarlison and Abdoulaye Doucoure. The latter has done a fantastic job of patrolling central midfield this season, even without partner Nathaniel Chalobah through injury – while chipping in with important goals too.

Although not on the scoresheet here, he created two assists and combined well alongside Etienne Capoue to continually pester Chelsea, forcing them out wide where possible as they tried grabbing a foothold in the game.

With four tackles, three interceptions, a blocked shot and four key passes, Doucoure himself came close to scoring what would have been an excellent individual effort but for a good stop by Thibaut Courtois, having accelerated forward through from the halfway line.

It was an excellent display, one that will give him much-needed confidence under new management with tough fixtures to come between now and the end of the season.

#1 Pressure continues to build on Antonio Conte, what next? 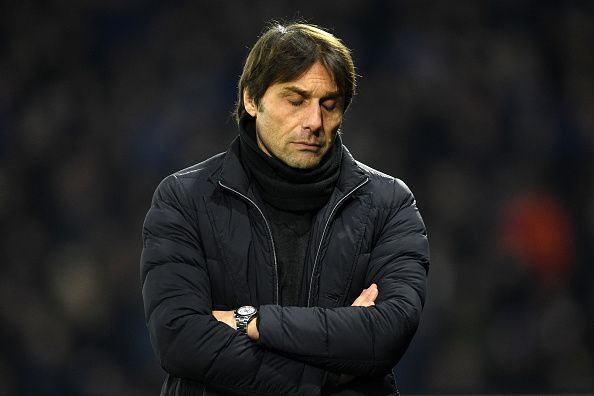 It’s almost a ticking time bomb at Chelsea when it comes to the managerial front, at least once every few seasons. When is he going to get sacked? Will he stay, will he go?

Perhaps many were naive in thinking that this was going to be a bit different, more of a long-term relationship between Antonio Conte and Roman Abramovich – but the two personalities simply do not match.

After an excellent first season, in which the Blues won the Premier League, it’s becoming increasingly apparent that they overachieved and prevailed during a campaign where most of their title rivals were simply too inconsistent to sustain a real challenge.

This term, it seems that the tide has turned and Chelsea themselves are where their rivals once were – fighting it out for top-four places.

Failure to sign the Italian’s first-choice summer targets has ultimately cost them, they struggled for form early on and the same has continued up until now. Chelsea have quality players in their side, but when the workload on Eden Hazard continues to increase, the talented Belgian can only do so much.

Álvaro Morata started life in the top-flight like a house on fire but ever since, the Spaniard has only netted two league goals since mid-November. Partly due to troublesome injuries, mainly due to inefficiencies in the final third. 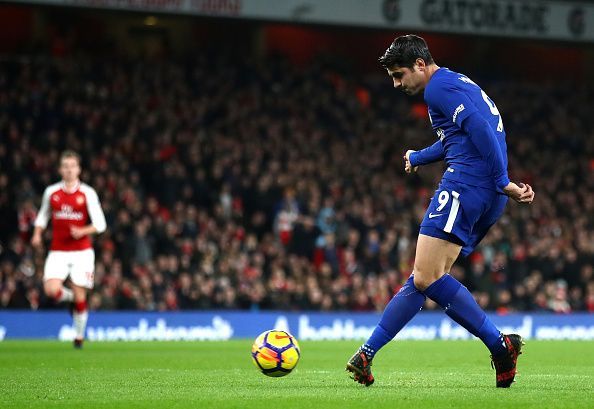 Where else are the goals going to come from? For a side who are usually defensively solid, it’s quite obvious that paper has covered cracks with Cesar Azpilicueta the only real centre-back who has been reliable in recent seasons for the Blues.

23 league goals conceded this term, they’ve already shipped nine of those in 2018. What’s next? UEFA Champions League knockouts return, with La Liga leaders Barcelona up next in a fortnight.

A similar kind of performance in that fixture will ensure a categorical dismantling at the hands of Leo Messi and co.