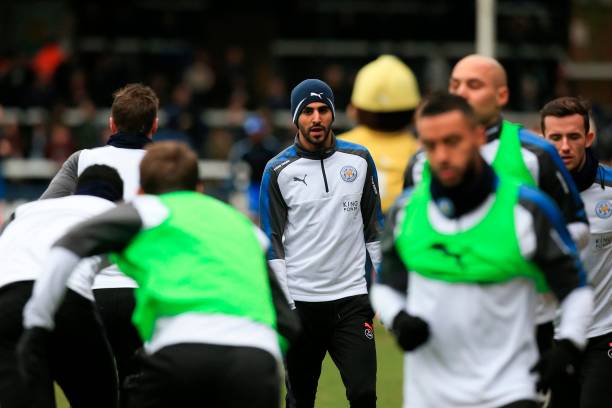 Riyad Mahrez has defended himself from the “untrue assumptions” about his period of absence from Leicester training, which directly followed a failed deadline day switch to Premier League leaders Manchester City.

The winger, 26, has travelled with the Leicester squad ahead of their evening kick-off against Pep Guardiola’s side – but is not expected to feature as part of Claude Puel’s matchday squad.

He trained for the first time since handing in a transfer request earlier today and as I previously covered, Puel’s eagerness to see him return is likely to have been a major factor in the decision to include him as part of their travelling team to Manchester in preparation for tomorrow’s fixture.

The talented Algerian forward said that the Foxes were “always aware” of his whereabouts, and it was not as if he was just absent for no reason.

“Off the back of that many people and journalists have made assumptions without properly checking the story, so I would like to clarify that all those so-called assumptions of why I was absent are completely untrue,” Mahrez was quoted as saying.

“I have been a part of the Leicester City team that has achieved much success including promotion to the Premier League and being Champions of the League. My goals have always been the same and I have always given my full 100% when I play for the club, the fans and my team-mates.”

“Those goals remain the same today and in the future and when I am asked to be a part of the Leicester team, rest assured I will continue to give my all.”

During Thursday’s media briefing, Puel revealed he would not pick Mahrez ahead of Saturday’s trip to the champions elect. However, it appears his decision has been swayed – somewhat at least – by the fact that Mahrez turned up for training and actually appeared to forget about the events which have transpired over the last fortnight.

It’ll be seen as a surprise and potentially an admission of player power if Puel goes against his word and includes Mahrez as part of the squad, not least against the side he was – and still is – so eager to join. However, he’s arguably their best player and although team-mates might not be happy about it, you can understand both sides of this situation.

Critics have suggested that Mahrez is too good for the club, while others believe he should honour his contract. That in itself is something that players, especially those reaching the peak of their powers, are increasingly keen to avoid with the possibility of better offers from interested suitors elsewhere on the table.

Manchester City vs Leicester City is a 5.30pm KO (GMT time), it’ll be interesting to see how the two sides match up and there’ll no doubt be an increasing focus on Mahrez – regardless of whether he plays or sits in the stands watching on from the Ethiad.