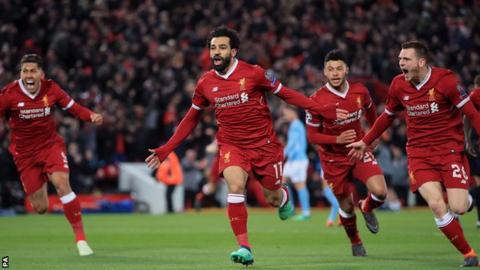 First-half goals from Mohamed Salah, an Alex Oxlade-Chamberlain wonderstrike and Sadio Mané’s header secured a much-needed Champions League first leg victory for Liverpool against Premier League leaders Manchester City – who were lacklustre and uncharacteristically poor under the lights at Anfield.

After a nervy opening ten minutes, the Reds broke the deadlock in-front of their boisterous home support following some poor defending and a stroke of luck from the officials in their favour, too.

Salah raced through down the byline towards goal, seemingly unchallenged. Kyle Walker, one of the league’s fastest players no less, allowed the Egyptian too much space to accelerate forward with purpose towards Ederson’s goal – his inability to then clear following Roberto Firmino’s tame effort proved costly as the in-form forward slotted home from a few yards out.

They were not done there either, with City players looking stunned by the way they were punished so comprehensively after squandering possession in a dangerous area.

After a tussle in midfield for possession, Oxlade-Chamberlain instinctively took one touch to control before firing goalwards from 25 yards out. The 24-year-old watched as his sweetly-struck effort flew beyond a helpless Ederson into the bottom corner with aplomb.

Then to make matters worse before the interval, City conceded once more. Aymeric Laporte, playing once more in an unfamiliar role at left-back, afforded Salah too much time on his stronger left foot to curl an inviting delivery into the box.

The visitors were numerically outnumbered inside their own area here and Mané latched onto his cross to head downwards into the corner. 3-0 and cruising, the Reds could not have asked for a better first 45 minutes. Pep Guardiola on the other hand, had plenty to talk to his side about during the interval.

His side dominated possession in the early going but importantly, crumbled when it mattered most. Their defensive frailties showed once more with Walker and Nicolas Otámendi in particular, finding it hard to cope with Liverpool’s relentless nature going forward – while they did not create enough to trouble Loris Karius in the hosts’ goal.

But there was still 45 minutes left to turn things around, find the all-important away goal and keep the tie finely poised, right? Wrong.

In the second-half, to City’s credit, they started fairly brightly (again). Ilkay Gundogan, a surprise starter here in place of Raheem Sterling, came off after 55 minutes for the former Liverpool man – unsurprisingly greeted with a chorus of boos from the Anfield faithful after an unceremonious exit three years ago.

David Silva, who was uncharacteristically sloppy at times and took too long on the ball elsewhere, linked up well with Leroy Sané down the City left. Fernandinho too, was keen to feed the silky German with plenty of service to try and create more opportunities in the final third.

The only issue here was, Sané didn’t have many options to choose from when he had the ball at his feet. Liverpool, eager to avoid a repeat of their 4-3 win back in January here, sat deep in their half for sustained periods and were keen to soak up pressure while frustrating City, pushing them backwards in a collective effort to keep a clean sheet.

Gabriel Jesus found himself isolated in-between Dejan Lovren and Virgil van Dijk, while de Bruyne was playing in a deep-lying midfield role and rarely got forward with the purpose and vigour to create chances like a number ten would.

With Sterling on the opposite flank, Silva often coming short and Fernandinho floating in-between the lines, Leroy – one of City’s bright sparks on a forgettable evening – found himself frustrated by his team-mates’ lack of movement in support.

City with it all to do

Commentators tried to suggest Laporte – himself not a natural fullback – should have done more to support him, but City were also cautious of the fact they’d already conceded three in quick succession and didn’t want to put the tie in further jeopardy by committing more men forward than they needed to.

So in the end, the majority of the second-half was packed with moments of frustration from a City perspective and Liverpool doing their utmost to defend well in numbers, remain compact and concentrated at the back to keep the Citizens at bay.

They did precisely that for 90 minutes, despite a few scares, and have a comfortable cushion to take with them to the Ethiad next week. With that in mind, City themselves failed to score an away goal and following a disappointing display like this, have to really deliver in an action-packed week straight after this defeat – Manchester United this weekend, before mission impossible in midweek.