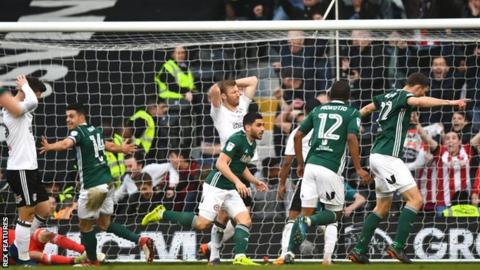 The visitors started brightly, pressing high and utilising the ball in the middle third well. Florian Jozefzoon and Ollie Watkins – playing as their centre-forward – were in particular quick starters as Fulham struggled to cope with their high press.

Marcus Bettinelli was forced into making a handful of good saves to keep his clean sheet intact, especially an acrobatic tip over the crossbar from Jozefsoon.

Bettinelli making an acrobatic save to deny Brentford in the first-half. (Picture: Getty Images)

Denis Odoi, predominantly a fullback, was causing all sorts of problems when bursting forward from centre-back. Alongside Ryan Fredericks, who was electric down the right-hand side, they were certainly posing questions for Brentford’s backline to deal with.

The combination play between Aleksandar Mitrovic and Ryan Sessegnon was clear to see, as the pair were patiently building up play from the edge of the area and almost got their reward for doing so. Sessegnon weaved past two challenges before forcing a low stop with the legs of goalkeeper Daniel Bentley – it was a warning sign for things to come.

Fulham, after a slow start, were beginning to get themselves firmly in the encounter and made intricate plays to play through Brentford’s defence. Despite this though, the visitors were constantly posing threats when midfield duo Ryan Woods and Nico Yennaris got on the ball, displaying their excellent passing range.

Sergi Canos squandered a good opportunity before centre-back Yoann Barbet did the same from close-range, missing a header while unmarked in the six-yard box.

Goalless at the break, but not for long

The scores remained goalless going into the interval but this was still an intriguing game to say the least. Defender John Egan came on for Andreas Bjelland (knock) at the restart with both teams keen for the all-important goal as time passed.

It became more cagey, fouls being committed in quick succession and you could gradually see frustration creeping into the match. Passing was accurate and easy on the eye, but the final ball was lacking – Dean Smith was keen to make a change and Neal Maupay, who I thought would’ve started, came on to replace Canos.

A decent display by the Liverpool loanee, he would’ve been frustrated that he could not score or create an assist from the chances that he fashioned.

But after 70 minutes, the deadlock was finally broken. Who else, but Mitrovic to guide home from the edge of the box and score his tenth goal in 14 appearances for the Cottagers.

Mitrovic fires home from the edge of the area to break the deadlock in an intriguing but tense affair. (Picture: Getty Images)

Cairney came close with an effort from range which curled narrowly wide of the far post, Bettinelli was forced into another dramatic stop on the line and Brentford began attacking with intensity again as Watkins earned a free-kick on the edge of the area.

Barbet swung into the box, but it was an easy catch for Bettinelli to deal with. Time continued to tick down and Wolves’ Premier League promotion celebrations seemed as though they’d be put on ice for now.

Sessegnon made important defensive interventions to thwart Brentford down the byline as they looked to double up on Matt Targett, but you could sense there was still drama to be had.

Neeskens Kebano, who himself was a second-half change, came off for the final few minutes as Cyrus Christie was introduced – Slavisa Jokanovic was keen to maintain their slender advantage, adding more defensive numbers as a result.

Four minutes of stoppage time was added on as Stefan Johansen came off to a warm reception for Oliver Norwood. You could hear the collective groan as the fourth official signalled on his electronic board, it was almost as though they knew themselves.

The ball was fizzed into the area and Maupay headed home from close-range to score his seventh goal off the substitutes’ bench in Championship football this season – more than any other player across England’s top four divisions.

Ahead of their midday kick-off against Birmingham tomorrow, Wolves are safe in the knowledge that they’ll be playing Premier League football next season. They’ve been top since November and thoroughly deserve their success, it’ll be exciting to see how they continue to progress under Nuno Espirito Santo with an ever-improving side at his disposal.

Fulham miss the chance to go second, at least for a week, after Cardiff’s 2-0 away win over Norwich City. Despite their unbeaten run being intact, they’re now third with three league games to play. Neil Warnock’s side have a game in hand and it remains in their destiny.