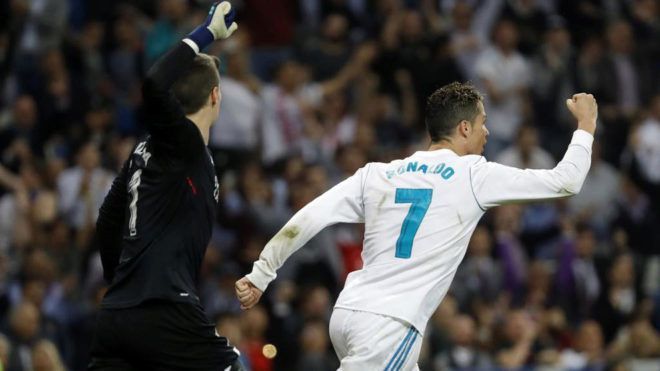 There was late drama at the Bernabeú as the points were shared in a tense encounter, but how did the players individually fare?

Cristiano Ronaldo scored his 24th league goal of the season to help Real Madrid rescue a point during an enthralling 1-1 draw against Athletic Bilbao at the Bernabeu.

Inaki Williams broke the deadlock after 14 minutes, leaving Keylor Navas helpless with a well-executed chip inside the area after Inigo Cordoba’s probing pass.

Real, for their dominance, were still behind and found themselves frustrated by a spirited goalkeeping display from 23-year-old Kepa Arrizabalaga, who they were close to signing back in January.

Raul Garcia hit the crossbar seconds after Carvajal’s heroic goal-line clearance before the hosts continued to crank up the pressure as time progressed. In the 87th minute, Luka Modric’s effort from range was turned goalwards by who else – Ronaldo – managed to flick into the bottom corner and save Zinedine Zidane’s blushes.

Here’s a look at the player ratings. 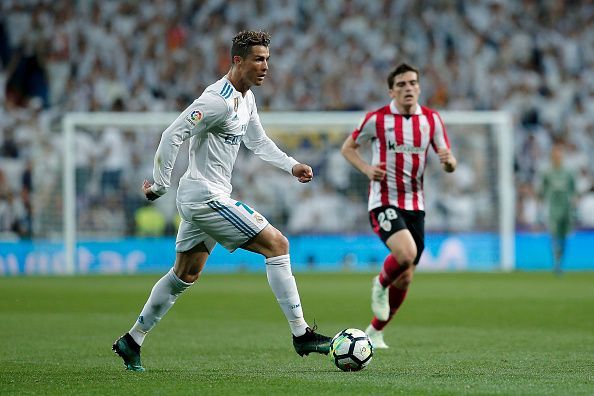 Ronaldo on the ball against Bilbao, where he netted one and could’ve had more too

Probably could’ve dealt with the danger better ahead of Williams’ finish, but opted to rush out and lost the battle for possession. Otherwise, did well to make saves when called into action and his anticipation was impressive in fairness.

Worked hard in a more attack-minded sense and should’ve been rewarded with a handful of assists for his efforts. Constantly accelerating down the byline, deliveries were regularly probing and unfortunate to see Ronaldo’s header crash off the crossbar early on too.

Solid as usual when he needed to be, having made three tackles and five clearances during a match where Real themselves were dominant in. Didn’t commit a foul either, which cannot be said for his adventurous centre-back partner.

Questions about the Spaniard’s defensive ability arise against top opposition but on this occasion, he did fairly well, given the circumstances.

Arguably switched off and didn’t react quickly enough for Williams’ goal but redeemed himself with a good all-round display afterwards. Made four interceptions, two clearances and a tackle but committed a foul and was lucky not to be booked for dissent after a needless off-the-ball incident. Bayern will undoubtedly have been watching, quietly with some confidence..

The Brazilian’s distribution and the passing range was on the show once more here, as he advanced forward with purpose and fashioned chances too. Four key passes, six accurate long balls and was also fouled on four separate occasions – emphasising what a pest he was to contend with.

The midfield metronome did his job well once again in the middle of the park and importantly, didn’t show signs of stopping or frustration entering his game as Bilbao tightened things up defensively in the latter stages, eager to earn all three points.

Just like Marcelo, he racked up four key passes and had the highest pass accuracy across the pitch – 95.8% – whilst not shying away from his defensive responsibilities either, with a tackle and interception to his credit also.

Unlucky not to have the equaliser in his own name, it would’ve been a justified reward for a tireless display by the experienced Croatian here. He was ultimately credited with a match-saving assist, so it could’ve been worse from his perspective. 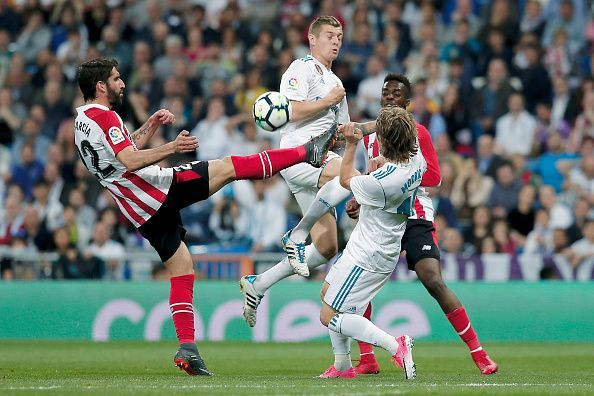 Modric and Kroos (centre) both battling for possession in midfield

He completed four dribbles, had 93% pass accuracy while making two tackles and an interception too from central midfield.

As one of the commentators said, performances like these often give Zidane a selection headache ahead of kick-off, as to who should be playing in attack. Vazquez was bright from the offset here and was constantly eager to get at Bilbao’s backline, with mazy dribbling runs forward and his turn of pace proving too much to handle at times.

He would’ve earned a higher rating here but his finishing let him down on a few occasions, although match statistics themselves make for interesting reading: four key passes, four completed dribbles, fouled five times, four tackles (three fouls and a booking!).

It was almost as though Asensio was playing with something to prove, he impressed here and displayed once again why he’s so highly-rated. Tricky to stop down the flank, his level of control and speed when dribbling allowed him to skip beyond defenders with seeming ease whilst creating goalscoring chances in the process.

Played 70 minutes prior to being replaced by Isco, doing his reputation no harm with an energetic display which warranted more reward for the Spaniard’s efforts of attacking intent. Six key passes (most in the game!), 95% pass accuracy, five completed dribbles and two tackles too.

It was another one of “those” games for Karim, who is still clearly a talented forward but unfortunately, didn’t get the chances to showcase his capability with critics looking on.

Had 32 touches of the ball, the second lowest tally from the starting XI for both sides here, and was forced to work increasingly hard to earn possession.

Far from a vintage display from Cristiano, whose touch secured Real’s late equaliser but in truth, probably should’ve at least had a hat-trick here. 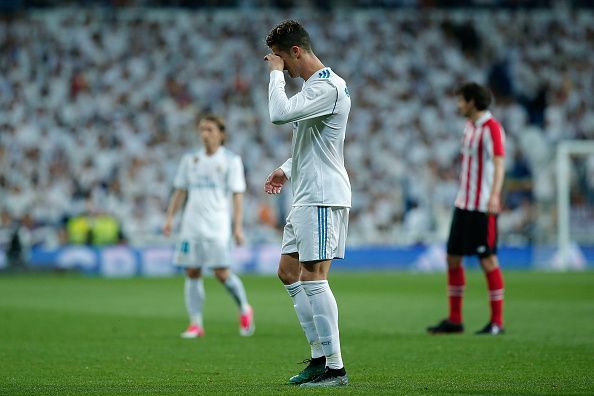 Despite providing the vital touch late on, Ronaldo knew he could’ve done much better

Was unlucky early on having headed onto the crossbar from close-range, but fashioned seven shots and only really managed to test Arrizabalaga twice. Dispossessed too frequently (3) and struggled to find his rhythm throughout.

Was regularly looking to get on the ball and create something, which is easier said than done – but naturally expected – in a game like this. Disappointed not to start, though his introduction provided fresh legs and added impetus with Real needing an equaliser.

Involved in a few promising passages of good build-up play in and around the area as Real intensified their level of attacking pressure but they were too infrequent to justify a higher rating than this. 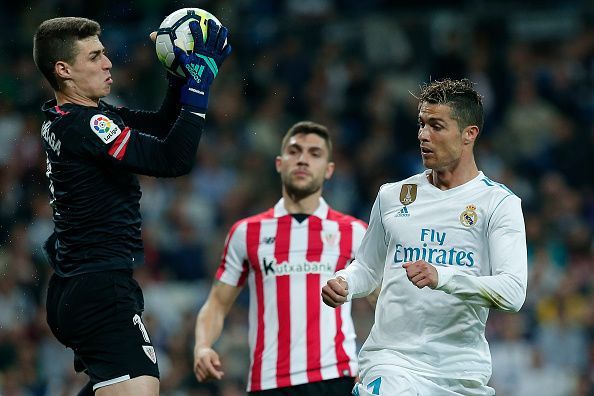 Kepa was confident, calm and cool as he regularly frustrated Ronaldo among others with all sorts of saves

If not for Kepa’s excellent goalkeeping, Bilbao probably would have found themselves down by a considerable margin before the half-time interval. Forced into making a handful of stops to deny Ronaldo, Marcelo and Asensio twice, he was refreshingly unfazed and seemed to just take it all in his stride.

Nothing he could do about Ronaldo’s finish, which nestled in the corner before he had an opportunity to respond after a wicked deflection from Modric’s initial effort goalwards. His team-mates will feel hard done by, but ultimately have their number one to thank for earning even a point here.

After an excellent individual display like this, Bilbao will be thanking their lucky stars that he opted to remain at San Mamés and sign a contract extension in January, with an increased release clause.

Didn’t get forward as much as he usually likes, was booked for a cynical foul late on but did okay defensively and distributed possession well (83.3%).

Solid defensively and needed to be, in a match where lapses of concentration would’ve been pounced on quite easily, Nunez acquitted himself well and the match statistics prove that: two tackles, two interceptions, two clearances and three blocked shots.

Nunez’s defensive workload was lessened in the presence of Martinez, who acted as the more experienced sweeper and was regularly clearing danger before it progressed further. Ten clearances, a tackle and two blocked shots – yet again, another resolute defensive display.

Deep down, he’ll be frustrated with just how easily he was beaten by Real attackers on more than one occasion, which subconsciously gave them the confidence to continue probing down the flanks. Completed two dribbles but his ball retention was poor to say the least, 57.7% makes for grim reading.

Workhorse. Iturraspe worked tirelessly to make it tougher for Real’s midfield to penetrate Bilbao, especially as the hosts enjoyed spells with sustained possession – so it would’ve been a patient waiting for a game at times, deciding when to press, choosing when to sit and quickly establishing the balance between both.

11 clearances, four interceptions and two tackles later, Iturraspe was Bilbao’s protector from a deep-lying midfield role, even if his passing was not at its usual high levels (77.3%).

Should have scored! Had a golden opportunity to do so in the first-half, having been played through on goal, but squandered the chance and fired towards Navas. Made two interceptions, two clearances but crucially, committed three fouls and was finally booked just before full-time.

A disappointing display by the 24-year-old, who didn’t do enough in an attacking sense and was unsurprisingly replaced midway through the second-half. Only completed one dribble – which speaks volumes – but found himself largely more focused on defensive duties, which undoubtedly would have been frustrating.

It was his beautifully-weighted pass which set Williams through on-goal with only Navas to beat, but moments of individual brilliance from him were infrequent here.

Operating on the left flank, his attempted long passes were largely inaccurate and just like others, had to focus more on contributing defensively having created his first assist of the league campaign.

Another player who should have scored! Okay, perhaps this one was more difficult, but following Carvajal’s heroic goal-line clearance, the Spaniard fired onto the crossbar and watched in disbelief as his chance flashed before his eyes.

Interestingly, won five aerial duels during the 90 minutes – joint highest alongside Ramos and also four completed tackles.. not what you’d usually expect from your creative midfielder!

If Bilbao were going to get a goal, you could just tell it had to involve Inaki – after all, he was playing as their lone striker on this occasion. He utilised his blistering acceleration and physicality to prove a handful throughout, took his chipped finish well but lacked regular service to create more of note. 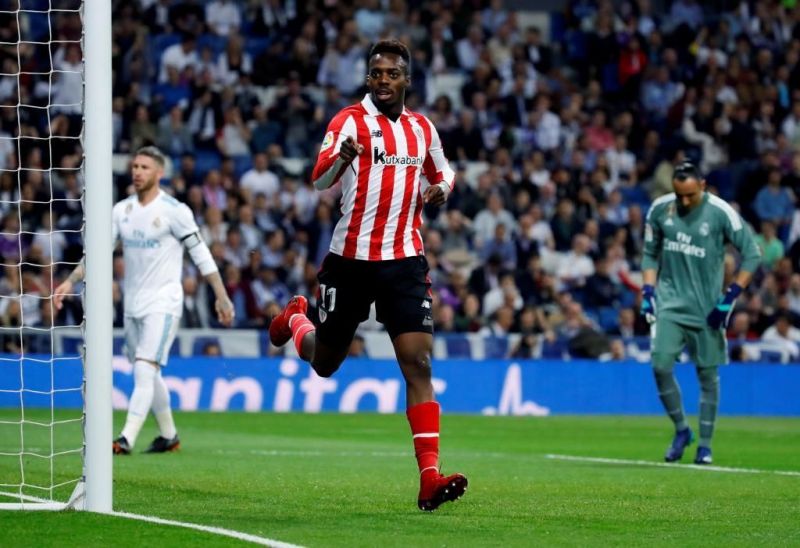 Inaki celebrates his well-taken finish, the 23-year-old’s 10th goal in all competitions this term.

The talented winger tried to contribute both in an attacking sense as well as defensively, found himself stuck largely doing the latter though as Real pinned their visitors back.

Markel Susaeta and Aritz Aduriz were both not on the pitch long enough to warrant a fair rating.