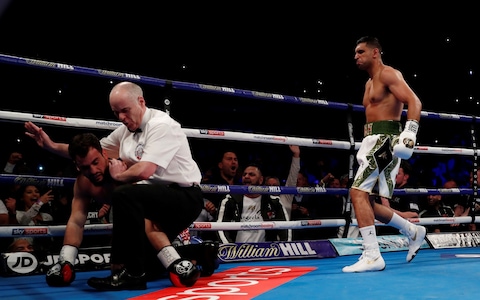 Amir Khan made his long-awaited return to the boxing ring an effective one, having cooly dispatched of Phil Lo Greco after just 39 seconds at a sold-out Liverpool Echo Arena on Saturday night.

Then a few hours later, Gervonta Davis – who himself had not fought for eight months – maintained his flawless professional record with a third-round TKO of Argentine challenger Jesús Cuellar at the Barclays Center in New York City.

Khan’s blitz simply too much for Canadian challenger

Khan hadn’t been seen in the ring for two years, his last bout was a devastating knockout defeat by Canelo Álvarez for three middleweight titles. Many had suggested despite his ability, the 31-year-old’s time in the sport was nearing its end, especially given he’d previously suffered consecutive title losses in 2011/12.

He signed a three-fight deal with Eddie Hearn at Matchroom Sport in January this year and naturally, this meant his return to action would be televised on Sky Sports.

This was his quickest knockout victory but given his energetic nature, not Khan’s only first-round win (or defeat!) thus far in his career. This is now his 7th and it appeared as though Lo Greco simply had no answer for him from the opening bell.

Khan was fast on his feet, appeared determined to prove a point and made light work in doing so. Lo Greco meanwhile, was struggling to find his range nor land a noteworthy punch as the Bolton-born boxer floored him after 15 seconds with a wicked right hand.

Phil, two years older than his British counterpart, looked confused and rightly stunned as the referee Victor Loughlin began counting to ten. Despite beating the count, Lo Greco’s attempts were ultimately futile as he didn’t move quickly enough to avoid being hit, or try anything to slow Khan’s momentum either.

After a fast flurry of punches against the ropes sent him tumbling over once more, the official had no choice but to step in and end matters there. Naturally, it wouldn’t be interesting without an added edge – which Kell Brook was more than happy to provide as he entered the ring following Khan’s emphatic victory.

During his victory speech, roared on by the thousands in attendance, Amir actively called out Kell before revealing he’s “chasing” the Sheffield-born fighter.

“The weight is an issue with Kell, I’m a 147lb fighter but fought at 150 here because I’ve been out of the ring for two years. I will fight and beat Kell Brook, the world knows it – he’s been living off my name for a long time. I came and signed with Matchroom, because I’m chasing you [Kell].”

Kell, on punditry duty with Sky Sports’ crew ringside, was understandably frustrated but kept his emotions in check before reaffirming his desire to fight Khan in the not-too-distant future.

The timing couldn’t be better, both are coming off morale-boosting victories having not been in the ring for a while – whilst Eddie Hearn himself said the pair would look back in frustration if they could not agree terms on what promises to be an exciting fight.

Davis comfortable in round three knockout

Davis’ hand aloft after sealing his 20th victory, maintaining his unbeaten run and becoming a two-time world champion in the process. Not bad at 23… (Photo source: Getty Images)

Movement sharp, deadly power-punching and a comfortable victory, Gervonta Davis impressed while becoming a two-time world champion in the process.

It’s remarkable that the Baltimore-born southpaw is still only 23, but when you watch him his talent and swagger comes as no surprise, not least with some of Floyd Mayweather’s status actively endorsing him.

20 fights, 20 wins, 19 by knockout, Cuellar was outboxed and looked vulnerable early on. Against fighters of Davis’ quality, you cannot afford to do so but to his credit, he kept going despite being knocked down with a devastating body strike in round two and once more the following round before it was all over.

In his post-fight speech Davis thanked his supporters, coaches and looked forward to the future after a tough year on a personal level for him:

“I want to thank God, my promoter, my management – my team, the beautiful people who came out tonight and Showtime.”

“I wasn’t focused on the Mayweather/McGregor undercard but I went home, conversated with my team, left Baltimore and got a new camp too. Tonight I showed that I’m a real champion: all I do is train under Kevin Cunningham, we all know he has no tolerance.”

On what’s next for him in terms of boxing bouts, he said he wants to face the winner between Billy Dib and Tevin Farmer to unify both IBF and WBA super featherweight titles.