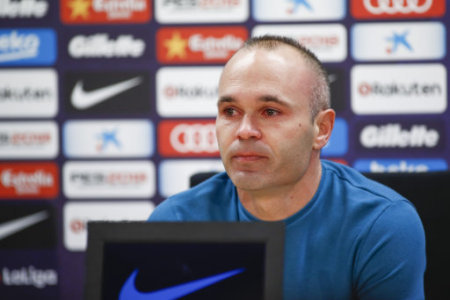 Andres Iniesta has officially announced that he will leave Barcelona at the end of this season. The creative midfielder, 33, came through the club’s esteemed youth system and turned professional back in 2001.

Alas, this news was inevitable. Just like other talents before him, Iniesta never appeared to be one who would dwindle in the path towards retirement – and at 33, he still has plenty left to give, even if it’s clear that he’s not as physically strong as he once was.

“This is my last season here,” Iniesta said during an emotional press conference in-front of his senior team-mates and journalists alike.

“I want to thank my team-mates, my only aim was to be a success at this club and I have done that.”

An illustrious stint among Europe’s elite

The Spaniard’s illustrious career has been an excellent one to follow and his creative genius ultimately helps him shine among his competitors – eight La Liga titles, four Champions League trophies and a World Cup winner back in 2010 against the Netherlands, is impressive to say the least.

Countless individual accolades and much more but although not retiring, this news crucially brings a close to his career at the top level among Europe’s elite.

Philippe Coutinho was essentially heralded as the heir to Iniesta’s throne upon arrival back in January and what better way for the Brazilian to settle quickly in Spain than to learn from the legendary playmaker himself.

It’s easy to forget though, that Iniesta penned a new deal at Barça back last October, a lifetime contract to be precise.

“There are still things to be sorted. I will never play against Barça, so I won’t play in Europe.”

Unsurprising, as he would prefer to continue playing without the constant pressures and speculation that come with it – following in the footsteps of former midfield teammate Xavi from a few years prior.

Speaking of transfer rumours, a move to the Chinese Super League has been heavily discussed according to reports though Iniesta is yet to confirm where his future does lie for the remainder of his playing days.

On Pep Guardiola, who spent four successful years at Barcelona, he said: “I just say thank you because he helped me. He helped me to understand the game better – just watching him. He was an example of how to be a professional, on and off the pitch.”

There’s plenty of intrigue surrounding what’s in store for Iniesta, as there are plenty of possibilities and he will naturally be touted as a potential manager once he retires too. One thing is for certain though: his brilliance will be missed.