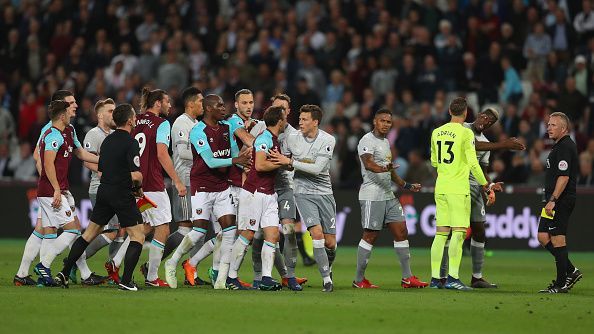 Manchester United confirmed a second-placed finish after a goalless draw away against West Ham, but how did the players individually fare?

Manchester United have sealed a second-place finish in this season’s Premier League after a goalless draw away from home against West Ham.

Managed by former boss David Moyes, it was always going to be an intriguing encounter but the hosts ultimately have goalkeeper Adrian to thank for keeping a hard-earned clean sheet as United continued to probe in-and-around the area.

The points were shared and here are the player ratings:

It was a hard-fought point for West Ham and naturally, they have their goalkeeper to thank for earning them one. He was made to work hard for his clean sheet, making six saves in total including a double save from Alexis Sánchez before an excellent reaction stop to push Luke Shaw’s goal-bound effort onto the post in the first-half.

Joe Hart’s future is still uncertain but with goalkeeping displays like this, the Spaniard has justified his place as their current first-choice.

A decent outing for the 19-year-old, who was kept busy but handled things well as part of the Hammers’ centre-back trio. Two tackles, two interceptions, three clearances and a blocked shot – solid defensively while maintaining concentration throughout.

Decent shift from the Englishman, especially as an auxiliary centre-back on this occasion. Kept busy and dealt with United pressure well without shying away from tackles – particularly his sliding challenge on McTominay in the first 45, which set the tone for the hosts’ physical approach.

Not as good in comparison to the aforementioned duo, Ogbonna still had an okay game but found himself caught out on a few occasions which could have lead to a handful of United strikes – particularly in the first-half. Has to remain on his feet more and have more patience when tackling or opting to challenge for possession in certain areas.

Started well but the 33-year-old faded as time wore on and United enjoyed more possession in midfield. Kept his passing accurate and rarely put a foot wrong though.

No surprise that it was the Frenchman hooked off shortly after the hour mark here, as he struggled to contend with Antonio Valencia’s surging runs down his side and rarely made any good defensive interventions either. Two clearances and a foul for the 24-year-old’s troubles.

Battled hard up against one of the league’s best midfielders in Paul Pogba and crucially, didn’t let him rest throughout. This was important in their attempts to frustrate the visitors, which ultimately worked.

An admirable display but his match rating was lowered as it came with negatives too – committing two clumsy fouls where he was lucky not to be booked. Six successful tackles though, was a game high!

Started well and maintained these levels throughout, even when United enjoyed large spells with possession.

Just like his midfield partner, worked tirelessly and earned a hard-fought point – you could tell he relishes games like these, regardless of where they are in the season. Two key passes, 89.7% pass accuracy, four tackles and five interceptions. Impressive.

Has shown flashes of the quality which persuaded West Ham to sign him on a loan deal back in January but also why Inter were content to let him leave! Three interceptions and three fouls committed, he often found himself on the periphery here and his passing accuracy (76.5%) also let him down – third worst outfield player across both teams.

Was far from the creative Argentine’s best game for West Ham, but he did okay. Completed four dribbles, was fouled on five separate occasions but also dispossessed twice and his touch let him down too often. This was never going to be a game where he’d be granted the freedom to roam in an attacking position and have the ball to feet regularly, but he’ll learn from it nonetheless having come up against tougher opposition.

He doesn’t always score, but you cannot criticise him for lack of effort. Arnautovic worked tirelessly to create chances, often by himself, as he was isolated in attack. Made three key passes but lack of support up-top stifled their efforts in the final third, largely restricting them to half-chances.

Was continually giving both Smalling and Lindelof a hard time when on the ball but perhaps spent too much time complaining about questionable officiating calls? On another day, he could have netted their match-winner.

Came on to provide something different in the final third and tried, but failed to create much of note in the half-hour he was involved.

Didn’t have much to do on an evening where United were dominant in terms of chance creation – but clinched his 18th clean sheet during a mixed campaign and consequently will be awarded the league’s Golden Glove award.

In only his 5th league start in 2018, Shaw did fairly well and will be happy to have earned valuable minutes ahead of a pivotal stage of career development on a personal level.

Came agonisingly close to netting his first senior goal but was denied by an excellent Adrian save in the first-half and showed no signs of fatigue late on either. Encouraging.

It was a decent showing from Jones, who was the best from a defensive trio who were rather underwhelming when dealing with dangerous situations here. His rather unorthodox way of challenging worked well and he also retained possession excellently – 95.2% of 42 passes was the game’s highest, while he made three interceptions and clearances too.

Poor. Although dominant in the air (six aerial duels won), that’s about the only real positive from a disappointing display by the Englishman on this occasion. Arnautovic beat him far too easily – not just once – while his passing was poor and would not have filled teammates with any confidence either. Settled down as time wore on but questions over his defensive quality are justified, not least after displays like this.

Not as poor as Smalling, but still, not a great defensive display by Lindelof – who has shown gradual signs of improvement at United this season but not enough to justify a regular starting berth. Two clearances, a foul committed and no successful tackles nor aerial duels won show that he was rather quiet during the trickier moments you would’ve hoped he stood up to support his team-mates at the back.

Gave Masuaku the runaround on a handful of occasions but crucially, his final ball let him down too often here. Did not have much to do defensively and still managed to make four successful tackles, which says a lot.

Unlucky not to score from the edge of the area in the first-half, Scott did well on his first league start since their win over Liverpool two months ago. Three successful tackles, he kept his passing largely accurate and did not shy away from the occasion either which will stand him in good stead for future seasons to come. It’s easy to understand why Mourinho rates him highly, he does the simple things well and allows others to focus more on their attacking responsibilities.

Nemanja Matic was given an evening off and in his absence, the Spaniard did what he does best: hassle, hurry and press the opposition players with relentless energy. Naturally what comes with it is fouls being committed – he made three – but also completed two tackles, two interceptions and clearances in an okay display.

Just like Smalling, won six aerial duels and found himself engrossed in an intriguing midfield battle up against Kouyaté. Missed a few goalscoring opportunities and despite being regularly hurried in midfield, was still creating chances.

Not his best game by any means and you could also see frustration creeping in towards the end, which reached a boiling point after a needless incident with Noble.

Given his world-class ability, the Chilean didn’t do enough to warrant a higher rating. Was often dropping too deep to pose any immediate threat to West Ham’s goal which meant he had to dribble past three or four to create a chance for someone else. Six key passes and seven successful dribbles reiterate this, though disappointing end product means his efforts were essentially for nothing.

Just like Pogba, Jesse was creating chances for himself and came closer than most with his efforts at Adrian – forcing the 31-year-old into smart diving saves to deny his swerving strikes on two occasions. Passing was also good, completed three dribbles before being replaced by Rashford in the final 20 minutes.

Came on with just over ten minutes plus stoppages to play in an attempt to add fresh impetus to United’s attacking repertoire but regularly found himself marked and frustrated by his team-mates’ reluctance to pass into feet when free with his back to goal.

Ashley Young and Eric Bailly were both late changes in second-half stoppage time and did not feature enough to warrant a fair rating on this occasion.