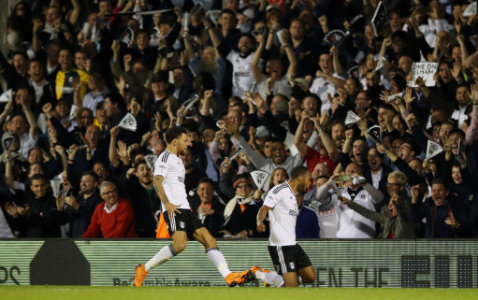 After a slender defeat on Friday, Fulham recovered and won 2-0 courtesy of second-half goals from Ryan Sessegnon and Dennis Odoi to seal their place at Wembley ahead of next weekend’s Championship play-off final.

Fulham, after their excellent surge in form over recent months, were denied an automatic promotion place after losing to Birmingham on the final day.

So with that in mind, you’d be inclined to believe that they would have extra motivation to succeed from the playoff route and avoid a similar fate to their semi-final defeat by Reading twelve months ago.

In their first leg away at Pride Park, Cameron Jerome’s effort was enough to seal a slender but important win for Derby to take with them to west London. 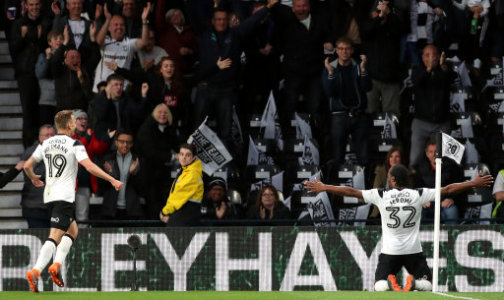 This was where the Cottagers have, in particular, thrived and with a place at Wembley’s final hanging in the balance, it was going to be intriguing to watch.

During a tense first-half, both sides fashioned goalscoring opportunities.

The best of those fell to Aleksandar Mitrovic, who struggled with limited service in Friday’s first leg, but came close and should have broken the deadlock on a few occasions.

His towering header over Curtis Davies forced an excellent reaction save by Scott Carson from close-range but the Serbian should have buried the chance after an inviting delivery into the box by fullback Matt Targett.

Championship player of the year Ryan Sessegnon too was an isolated figure on Friday but did his utmost to try and create options for his teammates. He was regularly frustrated early on as he rarely had opportunities with the ball, squandered the one promising chance granted after firing straight at Carson, and Derby defensively did an effective job of nullifying his threat too.

Derby themselves were certainly no pushovers either and despite having to endure sustained spells without much possession, worked hard as a collective unit to force Fulham into working hard to create their chances.

Tom Lawrence and Ikechi Anya in particular were proving tough to handle from the hosts’ perspective while Derby’s dangerous deliveries into the box was posing plenty of questions of Fulham’s backline as Dennis Odoi and Tim Ream both had to make important interventions.

As the second-half began, neither sides made any alterations but Fulham finally found the breakthrough just two minutes after the restart.

Stefan Johansen’s chest control teed up Sessegnon nicely with time and space to pick his spot from ten yards out – his sweetly-struck volley nestled in the top corner with aplomb and Carson, who was forced into numerous saves in the first 45, could do nothing to stop that one.

Bradley Johnson came close down the other end, after a deft overhead flick into his path by Lawrence. The former Norwich midfielder’s effort forced Marcus Bettinelli into an awkward stop at his near post and was a necessary warning sign that despite being in-front, the game was far from over.

Mitrovic’s hold-up play was proving a handful once more and on the hour mark, came close to gifting them an all-important aggregate lead – but could only fire narrowly wide of Carson’s far post.

Bookings, another goal, alterations made

Stefan Johansen was the first player in referee Chris Kavanagh’s book after a cynical but necessary foul on an onrushing Jerome – who had options in space on a counter-attack.

Aboubakar Kamara, who too came close to scoring in the first-half, did well to earn a corner after driving forward and striking goalwards which took a deflection before hitting the side netting.

From the resulting setpiece, Fulham doubled their lead and did so from an unlikely source. Odoi timed his leap to perfection and jumped over Craig Forsyth before heading into the far corner, leaving Carson rooted to the spot.

Derby needed a response and manager Gary Rowett made an immediate double change to rectify their precarious situation as Kasey Palmer and Matej Vydra came on in place of Anya and Lawrence.

The visitors, naturally, responded strongly to going behind and pushed Fulham back into their box as Andreas Weimann headed over the crossbar after good work by Palmer on the far side.

Ream would have been thankful that nothing came of Derby’s corner after needlessly conceding one following his overhit backpass put Bettinelli in trouble trying to recover it.

Instead, they could have added a third if not for poor conduct from Kamara which resulted in a booking for a silly dive. He burst past his marker before seeing an onrushing Carson outisde the box, choosing to fall over and claim a foul instead of speed past the ‘keeper too.

Jerome was replaced by David Nugent with 15 minutes to go as the visitors continued in their search of the goal to take this into extra-time. Targett received a warm reception after coming off in place of Tomas Kalas, making his third substitute appearance after recovering from injury in late March.

As time ticked by, cameras continued to show the heartbreak etched on Derby supporters’ faces in the away end.

Oliver Norwood replaced captain Tom Cairney as six minutes of stoppage time was shown on the electronic board and Craven Cottage – despite the continued support – were quietly anxious.

They held firm though to secure their first ever play-off victory, sealing a place in next weekend’s final against either Middlesbrough or Aston Villa in the process.

Derby did okay, but not enough when chances fell to them – if not for Carson’s multiple saves, they would have been further behind. It’s familiar territory from their perspective and Gary Rowett, who took charge last March, will be desperately disappointed that his side were unable to take advantage of a promising position on this occasion.