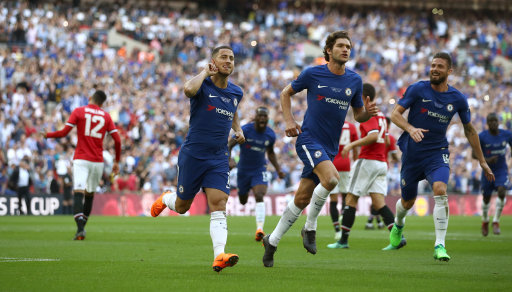 Chelsea have won this season’s FA Cup following a slender 1-0 victory over Manchester United, following Eden Hazard’s well-taken penalty midway through the first-half. United themselves created chances aplenty but the Blues held firm defensively when needed and were helped by important saves by Thibaut Courtois during a nervy second-half at Wembley.

This was always going to be an intriguing encounter between two of the Premier League’s best sides in their final fixture of the campaign. Going into a World Cup summer, neither side wanted to end on a defeat – not least one in a FA Cup final either.

Chelsea started brightly and should have been a goal in-front following Eden Hazard’s probing movements in and around the area.

He opted to shoot from a tight angle instead of passing towards an onrushing Olivier Giroud in support and despite David de Gea’s outstretched leg doing enough to thwart the Belgian on that occasion, the 27-year-old made no mistake when he was granted another goalscoring opportunity after 22 minutes.

After a searching pass towards his path by Cesc Fabregas, Hazard instinctively pounced on a poor defensive position from Phil Jones to accelerate goalwards and shape to shoot.

Knowing fully well that his mistake had allowed the forward through on-goal, Jones panicked and made a sheepish attempt to clear his lines with a wayward sliding tackle, missing completely and giving away a penalty in the process.

Michael Oliver was quickly surrounded by a flurry of Chelsea players, who were confused as to why Jones wasn’t given a straight red card. Instead, the referee correctly brandished a yellow as the centre-back’s attempt to play the ball was apparent, despite how wild his challenge actually was.

Hazard sent de Gea the wrong way from the spot, slotting home and wheeling away to celebrate after scoring on his 300th Chelsea appearance – no more than the Blues had deserved in the opening exchanges.

United, for all their possession in the first-half, struggled to create many chances or frustrate Chelsea’s backline. Antonio Rudiger and Cesar Azpilicueta in particular, were excellent at sweeping up any dangerous situations as they arose towards their goal.

As time progressed, the game was always going to open up further – not least after a succession of tactical fouls and wasteful passes being played by both sides.

In typical fashion though, United would have been keen for the first-half to continue, having created their best chances of the afternoon just before the interval.

Phil Jones was unmarked at the far post but headed narrowly wide after Ashley Young’s teasing delivery, before Marcus Rashford’s tame effort was blocked after a blistering counter-attack in stoppage time.

No changes were made at the break, but United started the second-half in the same manner that they ended the first.

Rashford stung Courtois’ gloves with a strike from range after good work from Antonio Valencia down the right, while they were beginning to threaten with more regularity and pushed men forward in numbers.

Alexis Sánchez had a close-range effort correctly ruled out for offside, just moments after Courtois made a fantastic save to keep his side ahead. The Belgian denied Jones’ low header inside the area following Rashford’s corner-kick. The stop, diving low to his left, was made even more difficult by the fact it deflected off Pogba before swerving goalwards.

Chelsea, who were forced to defend for sustained periods in the second-half, could have essentially put the game to bed with 20 minutes left.

N’Golo Kanté’s marauding run forward left United players in his wake before unselfishly squaring to Marcos Alonso on his right inside the box.

With the goal gaping and de Gea at his near post, the Spaniard hesitated before striking and hit straight at de Gea, seconds before calls for a handball were made after Young was adjudged to have blocked a return pass back into the box on the byline. Oliver waved away protests and play continued.

Courtois was forced into action once more, making an important save to deny Rashford with the youngster’s final kick of the game – attempting a dink over the Belgian, ultimately to no avail.

Mourinho knew that time was running out, so naturally, substitutions were needed. Anthony Martial and Romelu Lukaku, not passed fit to start here, came on in place of Rashford and Jesse Lingard with 18 minutes plus stoppages left to play.

Pogba had a golden opportunity to equalise from a United corner, but headed wide despite surprisingly being left free and unmarked. Gary Cahill, who had made an important block to deny Martial’s strike seconds before, watched on as the Frenchman leapt in the air and flicked wide of Courtois’ far post.

Juan Mata replaced Jones in Mourinho’s last roll of the dice, before Antonio Conte himself made two interesting substitutions – Hazard and Giroud off, in place of Álvaro Morata and Willian.

With five minutes of stoppage time signalled on the electronic board, Chelsea were more than happy to waste time where possible and avoid conceding any last-minute opportunities.

Courtois was booked for time-wasting after taking too long with a goal-kick and in the fourth minute of stoppage time, United had a corner and an opportunity to equalise. Martial’s delivery was disappointing though, straight into Courtois’ hands. It typified United’s struggles, plenty of promising attacks but lacking with the final ball they worked so hard to create.