Two second-half penalties in the space of just four minutes saw this fixture explode into life, as France were made to work hard for an important group stage victory – only their fourth in World Cup history.

Bleus’ early start but nothing to show for it

France started brightly, fashioned a few chances in the early going and frankly, should have found themselves ahead after 15 minutes. Kylian Mbappé, their continual bright spark, forced a diving stop from Brighton’s Matthew Ryan – before Paul Pogba and Antoine Griezmann both had efforts from range smothered by the goalkeeper. 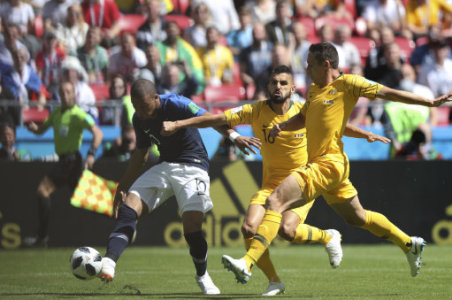 As the match continued, Australia grew in confidence and earned themselves a foothold. They were pressing well as a collective unit, causing problems of France’s attacking trio and doing well to limit their spaces in-behind the backline.

Despite this, France were always a counter-attacking threat yet struggled with their final ball as Corentin Tolisso and Ousmane Dembélé in particular were inconsistent when playing probing passes in between the lines.

At the half-time interval, the scores were remained goalless with the match finely poised. This did not look like it would last much longer.

VAR was used to change the officials’ decision, awarding a France penalty after 56 minutes when Joshua Risdon’s sliding tackle on Griezmann – previously adjudged to be well-timed – replays showed it was overzealous and he didn’t win the ball cleanly.

Griezmann stepped up and made no mistake, slamming home into the bottom corner and breaking the deadlock before prompting a mini-huddle. Perhaps to inspire some encouragement or refocus his team-mates, whatever it was didn’t seem to work because a few minutes later, their slender lead had evaporated from the spot up the other end. 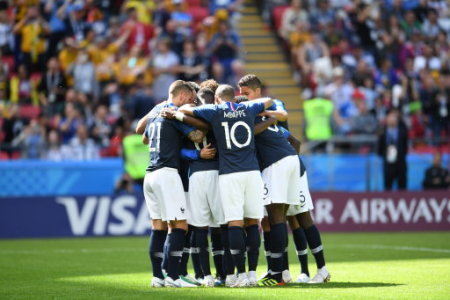 Griezmann and his team-mates celebrate with a huddle to try and encourage one another, which didn’t immediately have the desired effect.. (Photo: PA Images)

Barcelona’s Samuel Umtiti made a bizarre decision to lead with his outstretched hand when challenging for an aerial ball and the referee didn’t hesitate when pointing to the spot. Umtiti looked confused and startled but Aston Villa midfielder Mile Jedinak clearly was the opposite, making no mistake from his spot-kick to level the scoring once more.

Changes and an important winner

Substitutions aplenty followed, as Deschamps made a double change with Olivier Giroud and Nabil Fekir on to replace goalscorer Griezmann and Dembélé. Bert van Marwijk made a change of his own beforehand too, as Andrew Nabbout was replaced by Tomi Juric.

Juric advanced forward and could have created a goalscoring opportunity to power Australia into the lead, but for a tactical foul from Tolisso – taking one for his team and a necessary booking to break up play. Already on a yellow, Deschamps’ final change saw Blaise Matuidi on in Tolisso’s place as Les Bleus went in search of all three points.

It needed a moment of brilliance, fortune or another mistake to separate the two sides and Pogba was the ultimate beneficiary on this occasion. After a marauding run forward, his strike goalwards took a wicked deflection off Aziz Behich and cannoned in off the crossbar, ensuring France’s slender lead returned once more.

Despite some typically late drama with five added minutes, France held firm and earned a hard-fought victory. It was far from a vintage display but one which will give them some much-needed food for thought with tougher fixtures to come.