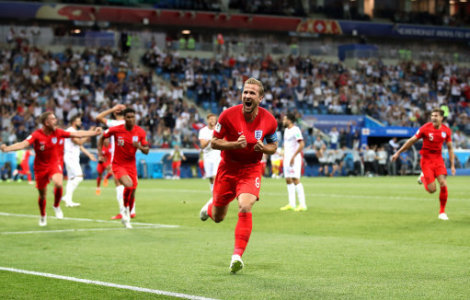 A brace from Harry Kane proved enough for England to scrape all three points against a plucky Tunisia side who were tricky customers and equally found themselves fortunate not to have lost the game by half-time.

Kane, who had not previously scored at any major tournaments prior to this fixture, broke the deadlock after 11 minutes when Mouez Hassen’s diving stop from a corner fell perfectly into the Tottenham striker’s path. He made no mistake to slot home.

Five minutes afterwards, Hassen sustained a shoulder injury and Farouk Ben Mustapha came on to replace him. England’s fast-paced approach continued as time wore on, though there was an air of inevitability about just how long this would last.

Harry Maguire was caught in possession on a few occasions, which caused alarm bells to ring within England’s backline as they were slow to react to Tunisia’s counter-attacking speed.

Then, disaster struck. Manchester City’s Kyle Walker was penalised for a swinging elbow on Ben Youssef in the area and although claims suggested it was soft and equally unintentional, his body position was poor. He took the forward out cleanly and crucially, prevented a goalscoring opportunity as the forward was advancing inside the box. 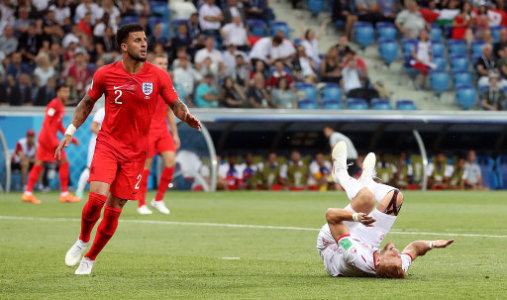 Needless: Despite claims it was soft and unintentional, Walker’s poor body position meant he gave away a first-half penalty. (Picture source: PA Images)

Ferjani Sassi stepped up and slotted into the bottom corner, despite Jordan Pickford getting fingertips to his equalising effort.

Then just minutes later, there were shouts for VAR down the other end. Harry Kane was wrestled to the ground from a corner-kick moments before Dele Alli hit the crossbar with his headed effort.

The referee appeared not to have seen the contact in the area, though his supporting officials and those in the VAR review team should have notified him about a potential penalty appeal that was ultimately ignored.

England, buoyed by their missed opportunities, had more golden chances to retake the lead once more. Kieran Trippier’s inviting through ball found Lingard with only the onrushing goalkeeper to beat. He poked the ball past substitute Ben Mustapha, before watching his rushed effort hit the post and trickle out of play.

Perhaps this wasn’t to be their day after all? They could have easily had a two or three-goal cushion before the half-time interval, yet were frustratingly still level with time ticking down.

Gareth Southgate made changes with an injection of pace and fresh impetus needed – Marcus Rashford and Ruben Loftus-Cheek came on for Sterling and Alli, who appeared to be struggling with a thigh strain for most of the match. 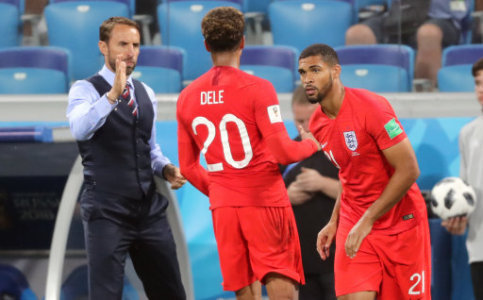 Rashford made intelligent runs to try and stretch Tunisia’s backline, while Loftus-Cheek himself proved a cool and calm presence in midfield: one who played with speed and purpose, an awkward nuisance who won the corner from which England’s blushes were spared.

Harry Maguire’s headed flick-on fell to Kane, who was unmarked at the back post and headed home from close-range to gift England all three points in stoppage time.