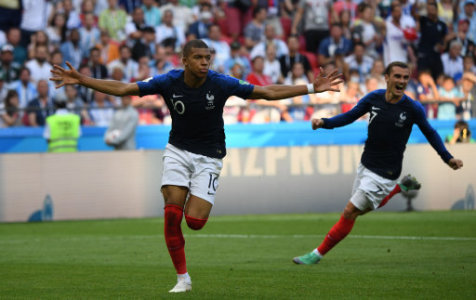 Kylian Mbappé scored two and assisted one more as France rallied to prevail over Argentina in a seven-goal thriller to kick off the knockout stage in style. Argentina, who needed a Marcos Rojo late winner just to qualify for the last-16, have been eliminated.

This one had the semi-final feel about it, and kicked off the last-16 fixtures in some style. France had been far from convincing, but crucially got the job done to top Group C while Argentina needed help and rode their luck at times to scrape past a plucky Nigeria side to finish second in Group D behind Croatia, who were propelled by Real Madrid’s Luka Modric.

Jorge Sampaoli must have been crying out for a player of Modric’s quality in midfield to settle their nerves early on, especially after Antoine Griezmann saw his free-kick effort crash off the crossbar.

It went from bad to worse for Argentina after ten minutes, as Kylian Mbappé embarked on a blistering run forward and simply left his markers chasing his heels. Manchester United centre-back Marcos Rojo, who was their hero with a late winner on matchday three, quickly turned into a villain after hauling the 19-year-old down to ground inside the box, granting them an early penalty.

Mbappé’s lightning quick acceleration and change of pace have been marvelled by many over the past two seasons, having made his breakthrough at AS Monaco in 2016. So with that in mind, it appears baffling that the Argentina backline would afford a player of his quality such space in-behind them, where he would take full advantage during a match of such magnitude.

Griezmann, who had netted one penalty from nine shots in Russia thus far, stepped up and made no mistake, sending goalkeeper Franco Armani the wrong way to break the deadlock.

Les Bleus were hungry and eager to exploit Los Albicelestes‘ weaknesses, zapping any energy from within. They could have found themselves even further ahead before the half-hour mark. Mbappé’s persistent runs in-behind were being spotted by Paul Pogba – his quick thinking almost resulted in their second goal. Again brought down, this time just outside the area, Pogba fired over the crossbar from the resulting free-kick.

Cristian Pavon combined well with Gabriel Mercado down the right-hand side, though the Sevilla fullback’s delivery into the box struck Samuel Umtiti’s arm and flew out for a corner. Despite his animated claims for a handball, the referee pointed for a set-piece, one which ultimately nothing came from.

Then as time wore on, Lionel Messi looked increasingly frustrated with his lack of support in the final third. So much so that he was dropping deeper to win possession, despite being played as a centre-forward, because he’d either receive the ball in amongst a range of France players, or too late to create a goalscoring opportunity.

Just a few minutes before the interval, he was wheeling away to celebrate Ángel di María’s sumptuous strike from range – equalising despite being fortunate to only be a goal behind at the time. 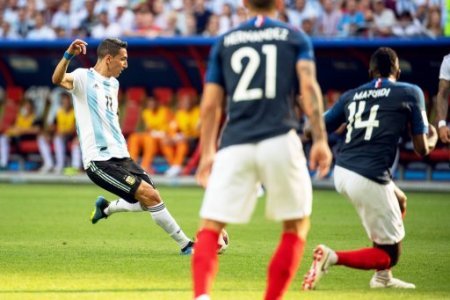 Critics would be wondering exactly where France midfielders were during the build-up to his goal, as they ambled slowly from the edge of the box to try and close him down – too slowly. He still had plenty to do, striking well and with precisely the right power and elevation to fly past Lloris’ despairing dive into the corner.

It spoke volumes as a wave of Argentine noise reappeared after the PSG midfelder’s strike, which turned the game on its head and presumably the half-time team-talks too.

Rojo, who struggled in the opening 45 and was already in the book, was replaced by Roma’s Federico Fazio as Sampaoli was keen to avoid any more defensive mishaps as the game intensified.

From the delivery, Messi struck goalwards after creating shooting space past Blaise Matuidi. He consciously knew that it would perhaps test Hugo Lloris, but not much more.

That was moments before Mercado’s fortuitous flick-on wrongfooted the Tottenham goalkeeper and trickled into the corner at his near post. France were stunned. Despite being on top here, they suddenly found themselves a goal behind and had more work to do, if they were to avoid being eliminated.

Mbappé set upon doing this. A combination of di María and Ever Banega fouled him abruptly, although the latter was booked for committing to a needless sliding challenge once Kylian went to ground. He, just like Javier Mascherano, would miss the quarter-final if Argentina were to win here.

Fazio almost helped France score an equaliser, after a mix-up in communication between himself and Armani at the back. Griezmann, quick to pounce on the danger, was being held back by Fazio yet didn’t apply enough curve nor direction on his effort, which trickled past the far post.

Benjamin Pavard found the perfect time to score his first France goal, after eight appearances, striking a volley beautifully from the edge of the area. It silenced the Argentine crowd once more, and was precisely what his team-mates needed to refocus their energy on.

Another sweet strike: Pavard watches his well-struck volley arrow towards the top corner

Enzo Perez was replaced, Sergio Aguero came on in his place with 25 minutes left to play – Sampaoli knew that he needed more attacking threats on the pitch.

2-2, the match was finely poised: but not for long. A quick-fire double from Mbappé was enough to gift France a two-goal cushion – striking low and hard for his first, having weaved beyond the Argentinian backline once more.

His second was the result of a deadly counter-attacking move, started by Lloris and Kanté from the edge of their own box. Olivier Giroud teed him up nicely, before he coolly slotted into the bottom corner beyond a helpless Armani.

Mbappe made no mistake from close-range to complete his brace

Argentina found themselves behind yet again and this time, there was a resigned look on the players’ faces. Going a goal behind was one thing, but a two-goal deficit to overturn with time ticking, this would be near impossible just to force extra-time.

Lionel Messi sprinkled his magic touch to make it 4-3 in stoppage time, playing a perfectly-weighted pass into Aguero saw the Manchester City forward leap and head beyond Lloris from close-range, though this proved to only be a consolation.

As a result, Argentina are the first team to be eliminated from the competition from the knockout stages. Questions were asked of France and they’ve answered them so far, though they have Mbappé’s brilliance to thank for a quarter-final place.

They will play the winner of Uruguay vs Portugal next week, which promises to be another intriguing watch in store.