Raphael Varane’s towering header and a long-range effort from Antoine Griezmann were enough to see France progress into the World Cup semi-finals in a feisty, tough affair – which only intensified as the match continued.

The build-up to this game was dominated by the availability of PSG forward Edinson Cavani, whose link-up play alongside Luis Suárez in attack for Uruguay has been a joy to watch at times. Having limped off with a calf injury late on after his brace knocked out Portugal last weekend, his absence was a significant one- Girona’s Cristhian Stuani started in his place here.

This match, billed as an intriguing watch but equally one that would probably bore neutrals into a siesta, was punctuated by a succession of early fouls by both sides. Atletico Madrid’s Jose Maria Gimenez left his imprint – accidental or not – on Olivier Giroud’s heel and it was only the beginning. Paul Pogba could count himself perhaps lucky not to receive an early booking after two cynical fouls, too.

Hugo Lloris was forced into quick reactions to deny Stuani, who was inches away from latching onto the ball from a corner-kick which caused the French some trouble. 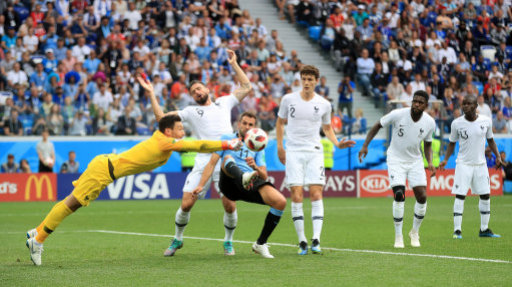 France were dominating possession, as expected, whilst trying to effectively link up their attacking trident – easier said than done. Uruguay were characteristically tenacious, keen to disrupt Les Bleus’ playing style by any means necessary, whether that be cynical fouls to make the game stop-start, or tirelessly press as a collective unit.

The best goalscoring opportunity of the half came to Kylian Mbappé, who misjudged just how much time and space he had in the area before heading over the crossbar from close-range, as opposed to controlling the ball and striking at Fernando Muslera.

He was, as usual, looking to create things from the right-hand side. Genoa’s Diego Laxalt was keen to frustrate him though. Giroud and Corentin Tolisso, starting for the suspended Blaise Matuidi, both came narrowly close to fashioning opportunities inside the box from crosses.

Lucas Hernandez was given the game’s first booking just after the half-hour mark, having cynically tugged on the shirt of Boca Juniors midfielder Nahitan Nández, who harrasssed and hurried him until he made a mistake before advancing forward with dangerous urgency.

Pogba grew into the game as it wore on, looking to find the run of Mbappé who was being tracked stride-for-stride with Laxalt. He unleashed the 19-year-old’s advancing run, who skipped past his marker before fizzing a teasing ball low into the box. Unfortunately for him, both Griezmann and Giroud were nowhere to be seen, both jogging towards the edge of the area – any danger was thus averted.

That one move typified France’s issues in attack, the trio were either too far away from one another or too close – Mbappé provided width, Giroud was seen as the key link and Griezmann the attacking genius looking to unlock the Uruguay backline. With Uruguay’s intelligent deep defensive block, it essentially stopped them from enjoying the same success they did against Argentina.

Juventus’ Rodrigo Bentancur was next in the book, for a painful whack on Tolisso in a dangerous area. The youngster would miss the semi-final, if Uruguay were to progress on this occasion.

How his mistimed tackle proved costly, too. Griezmann whipped a teasing delivery into the box, which saw Raphael Varane jump over Stuani before heading home beyond a helpless Muslera towards the bottom corner. France’s first shot on target, the deadlock was broken and just minutes before the half-time interval too. 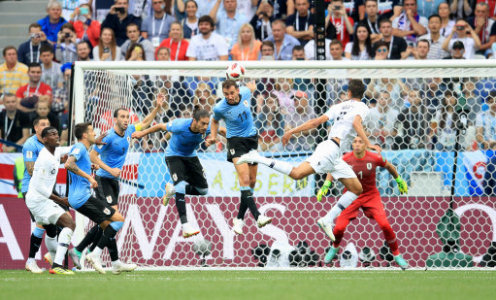 Griezmann’s deft stutter saw Uruguay players freeze, France attackers advance, and allow Varane both time and space to time his run perfectly. Nandez and Stuani both had chances to equalise before the interval, but Lloris’ save to deny Martin Caceres’ leaping header from a Lucas Torreira free-kick was superb.

His effort appeared goal-bound, though the Tottenham ‘keeper managed to come across quickly on his line and make a diving save with his outstretched right hand. Diego Godin should have reacted better to the rebound, but as Lloris was equally quick to recover, the Atletico centre-back was put off and managed to fire wildly away from goal. 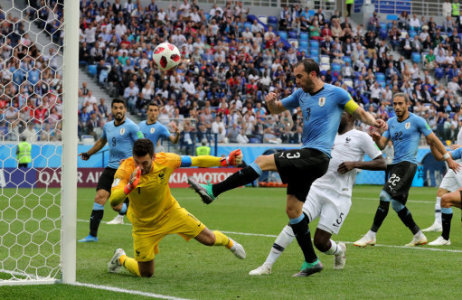 Lloris responded quickly, having denied Caceres, to close down the angles and force Godin into a mistake. (Picture source: PA Images)

Neither side made any alterations to start the second-half, though France could have doubled their lead just seconds after the break. Griezmann managed to slip past a pair of Uruguay players but he should have released Mbappé, who was advancing with speed to his right and crucially, had beaten his marker in a foot race once more.

After being fouled yet again, Kylian decided he’d take an inswinging free-kick and whipped a dangerous delivery into the box from it. His lofted pass almost found Pogba inside the six-yard area, but for an important intervention by Muslera, coming out quickly to punch and clear his lines with the Manchester United midfielder lurking.

Stuani and Suárez were looking to combine in the final third, like the latter has done well with Cavani previously. First touch by both was impressive, though Stuani’s quality of pass let him down with the Barcelona striker waiting patiently unmarked.

His reaction was one typical of a forward who is used to playing alongside better quality. Frustrated with time continuing to tick, he was yet to have a real opportunity to test Lloris himself and Uruguay were being reduced to half-chances besides Caceres’ leaping header.

It didn’t stop him from advancing with a menacing look on his face. He wanted to stamp his authority on this game, doing his utmost to link up with players in-and-around the area. Oscar Tabarez knew he needed to change something, so a double substitution was being prepared. Stuani and Bentancur off, Maxi Gomez and Cristian Rodriguez on.

Even the 71-year-old couldn’t have foreseen what happened next. Griezmann struck goalwards from range, testing Muslera with an effort which moved in the air. The goalkeeper’s positioning was awkward, he misjudged the flight of the ball and moved too far to his left before attempting to parry Griezmann’s effort.

You knew what was next. Muslera looked puzzled as the ball escaped his grasp, flew up in the air and into the back of the net. France’s lead was doubled, Griezmann himself looked too embarrassed to celebrate and Uruguay’s hopes of a semi-final place were increasingly slim by the minute. 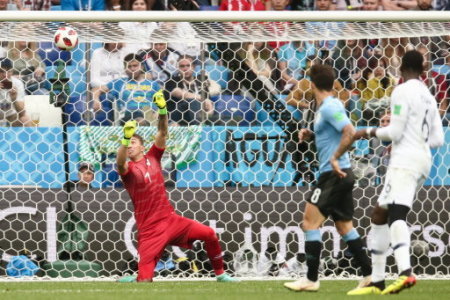 Muslera misjudged the flight of Griezmann’s effort from range and his mistake was the final nail in Uruguay’s coffin. (Picture source: PA Images)

Mbappé got himself caught up in a physical row with a handful of Uruguay players, unhappy about his showboating before suggesting he’d gone down too easily trying to win a foul. Godin, Rodriguez and Nandez were all involved, as were Pogba and Tolisso, as Varane played peacemaker before referee Nestor Pitana booked both Mbappé and Rodriguez. 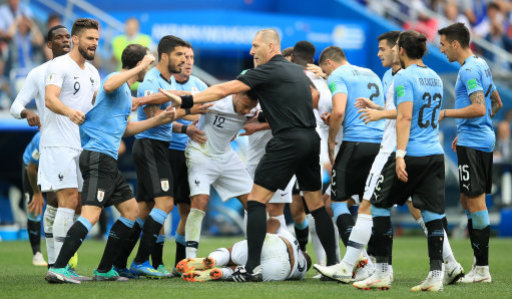 Tempers flare between the two sides after Kylian Mbappé is fouled

Substitutions and a few half-chances besides, there was not much else of note before the referee blew his final whistle, sending Uruguay home and extending France’s stay in Russia for at least another week – where they will play the winner of Brazil vs Belgium for a place in the World Cup final.

It was a deserved victory for them, they took their chances when they came without having to really hit top gear in a completely different setting to their breathtaking 4-3 win over the Argentinians. Tabarez’s side will count themselves unlucky given the manner in which they conceded both goals. A set-piece and goalkeeping mistake, it’ll be interesting to see how the south Americans recover from this in the years to come.