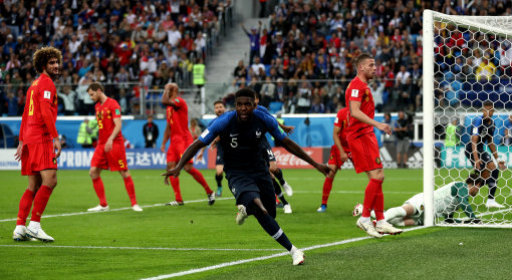 In a real battle, Les Bleus came out on top and have plenty of players to thank – namely the goalscorer, his centre-back partner Raphael Varane for immense displays at the back, as well as goalkeeper Hugo Lloris for a string of impressive saves to keep the scores goalless in the first-half.

The first of this year’s World Cup semi-finals saw two local nations face off in an intriguing battle between some of the world’s best players.

Belgium, who were impressive in their victory over Brazil during the previous round, could consider themselves unfortunate not to have earned an advantage after a bright first half-hour in St Petersburg.

Hugo Lloris was forced into action on numerous occasions as Roberto Martinez’s side were probing and looked threatening in and around the area. Similar to his excellent stop denying Godin in the last-eight, he pulled off a diving save low to his right, stretching across to thwart club teammate Toby Alderweireld. 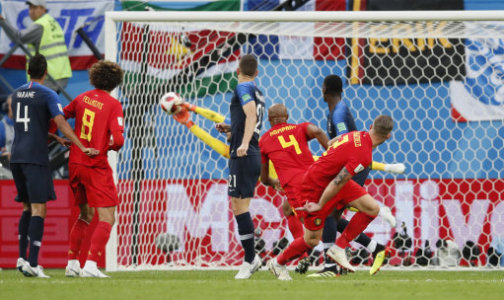 Eden Hazard and Kevin de Bruyne both had bright spells early on, while Kylian Mbappé and Paul Pogba were France’s best players as they looked to combine and stretch Belgium’s backline in various ways.

Samuel Umtiti and Raphael Varane in particular, were called into action and had to make goal-saving interventions to keep Les Bleus’ clean sheet intact before the break. Hazard’s curling effort was instinctively headed over the crossbar by Varane before de Bruyne’s low fizzed ball across the six-yard box had been cleared to safety from the Barcelona centre-back.

It was clear that France needed to survive this wave of pressure with their clean sheet still intact, whilst embracing the counter-attacking nature of their own game without needlessly forcing too many players forward.

N’Golo Kanté and Blaise Matuidi proved pivotal in helping them achieve this. The former was ever-present in midfield, intercepting loose passes and ensuring France kept hold of possession at times when they were under the kosh, before Matuidi utilised his power and tactical intelligence to prove a nuisance for Belgium players to contend with. 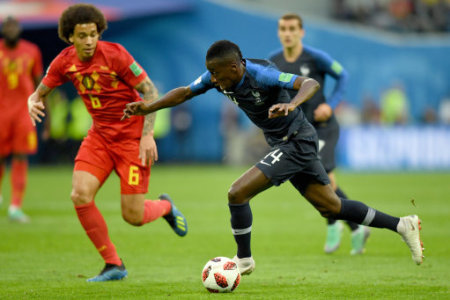 Matuidi (no.14) was a nuisance for Belgium to defend against, rampaging forward showing both tactical awareness and intelligence when picking his moments

His rampaging runs through midfield were beneficial to ease pressure whilst providing another genuine attacking treat from the flank, where Belgium would be focusing more on Mbappé and Griezmann instead.

Olivier Giroud came close to latching onto two promising long passes before the break, had a header swerve narrowly wide of Courtois’ far post and struck wildly after Mbappé’s cushioned pass into his path saw him with only his club teammate to beat. 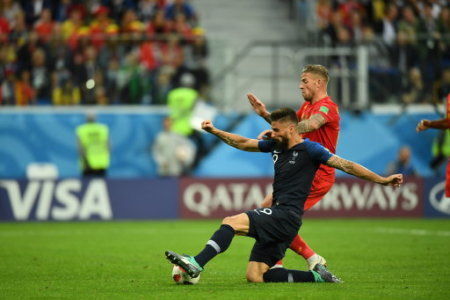 Giroud (far right, no.9) slides across the turf and fails to connect sweetly with Mbappe’s pass under pressure from Alderweireld

He should have reacted seconds quicker and accelerated forward, as opposed to waiting patiently, to strike. Sliding across the turf before striking wildly, Mbappé looked in disbelief as he knew what a great opportunity he had helped create to break the deadlock.

It didn’t faze him, though. Instead, it prompted him to try harder and create more goalscoring opportunities for his teammates. Just minutes later, the 19-year-old played another neatly-weighted pass into the path of an overlapping Benjamin Pavard inside the box.

Courtois, who had rarely been tested up until this point, denied the fullback with an important stop just before half-time – although the Stuttgart youngster knew he should have scored there. 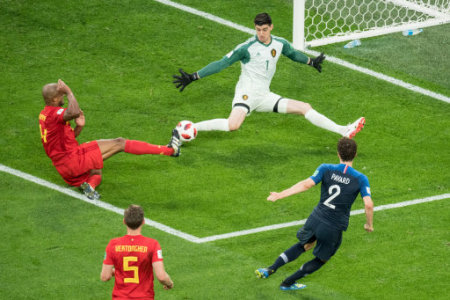 Pavard watches his strike flash across goal after Courtois’ outstretched leg keeps the scores level before the interval.

It was narrow and awkward as Thibaut closed down the angles, but there was no elevation on his strike and he could only watch it trickle narrowly wide after Courtois’ timely intervention.

Deadlock broken shortly after the interval

Neither side made any alterations at the half-time interval but really, why would they? The score was finely poised, goalless and the match itself was going to open up with time too. Axel Witsel’s delivery into the box was met by Romelu Lukaku – who was longing for quality service into his path – though his header flashed over the crossbar, under pressure from Varane alongside him.

Matuidi’s intelligent running down the left-hand side continued to pose a threat, one that Belgium players were slow in reacting to. Having been fed through by Lucas Hernandez, he evaded the attentions of both Witsel and Alderweireld before threading a pass into Giroud’s path. Olivier still had plenty to do, swivelling past Vincent Kompany before being met by a thunderous block from the Manchester City captain when shaping to shoot.

From the resulting corner, France broke the deadlock. Just like against Uruguay, a centre-back rose highest to take advantage from a set-piece. Umtiti leaped above Fellaini, heading goalwards and wheeled away to celebrate scoring his third goal in 24 appearances for France.

You could see just how much the goal meant to Umtiti and his teammates, though the next test was how they’d manage to cope with Belgium’s next wave of attacking pressure.

Before that though, France could have seen their lead doubled. Mbappé was once again at the forefront, leading the counter-attack, before teeing up Matuidi on the edge of the area. His strike was blocked though the danger had only been partially cleared, as the ball fell again to Kylian.

What followed was improvisation at its finest, as he combined with Matuidi before creating a backheel flick towards Giroud, whose effort was thwarted by an important sliding Dembele block.

Danny Murphy immediately said: “We’ve just seen in 90 seconds why this boy is going to be the best player in the world. Pace, great awareness, skill and calmness. He’s got such maturity, something you shouldn’t see from someone of that age.” Himself and other World Cup critics are clearly in agreement.

France were patient after this spell, looking to frustrate and it worked in their favour. Dembele, who struggled at times, was replaced on the hour mark for fresh legs in the presence of Napoli forward Dries Mertens.

Hazard meanwhile, was booked for a tactical foul to halt the advancing run of Matuidi in midfield. Fellaini’s last action of the game was to head narrowly wide of the far post before he too was replaced, with winger Yannick Carrasco coming on in his place.

Substitutions galore ensued in the final few minutes, Les Bleus more than happy to bide their time carefully while Belgium pushed bodies forward in search of a late equaliser. With a whopping six minutes’ stoppage time, this was Belgium’s last chance to send the game to extra-time.

Mbappé was booked for cheekily time-wasting near the corner flag, before both Griezmann and substitute Corentin Tolisso were denied by Courtois from close-range. Kevin de Bruyne’s excellent deliveries were once again posing questions of the French backline, though Varane – imperious in the air – was alert to the danger as Lukaku lurked behind Umtiti.

The referee Andres Cunha finally blew his whistle for full-time, meaning France will play in the World Cup final on Sunday. Belgium played well in stages but did not show enough over the 90 minutes against a resolute French side, who picked their moments to get forward and really should have scored more than one goal.

Courtois’ excellent saves ensured this was close, but who knows what might’ve happen if Belgium had scored in the first 30 minutes? We’ll never know.