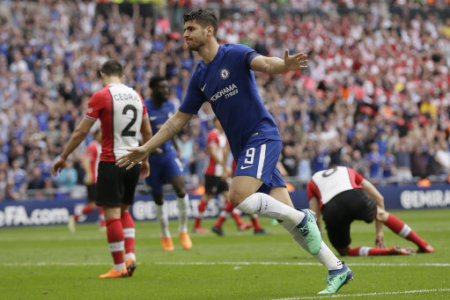 Chelsea are considering the possibility of keeping club-record signing Álvaro Morata this season, as recent developments suggest Gonzalo Higuain is set to join AC Milan instead of the west Londoners.

Morata completed a £58m move from Real Madrid twelve months ago and despite an encouraging start, struggled to adapt to Premier League life. It is believed the Spaniard, who was omitted from their World Cup squad, wants to return to Italy’s Serie A – where he impressed for Juventus between 2014 and 2016.

However, Juventus no longer need his services, having surprised many to sign Cristiano Ronaldo for €100m. Milan were also said to be interested earlier this summer, but given their financial constraints, are unable to pay Chelsea’s asking price – as well as his high wage demands.

Blues looking to complete some business, at least

According to the Evening Standard, club director Marina Granovskaia met with Juventus sporting director Fabio Paratici in Italy yesterday, but their meeting was believed to focus on completing a £36m move for defender Daniele Rugani, instead of Higuain or other potential targets.

Rugani turns 24 this weekend and since joining Juve three years ago, has made 67 appearances. Last term he played on 26 occasions in a stacked side with plenty of competition for places. He completed nine tackles, 12 blocks, 15 interceptions, 73 clearances, 91% pass accuracy and won 27 aerial duels (54% success) for Juventus in Serie A last season.

Sarri wants Higuain, but the Blues are reluctant to spend such a high price for an ageing player – one with a worldwide reputation for failing to impress in big matches.

Morata is one of four senior strikers currently at Chelsea. Michy Batshuayi has been linked with a permanent move, having impressed out on-loan at Borussia Dortmund last season. Tammy Abraham has attracted interest after an encouraging showing in pre-season, while Olivier Giroud could return to France with Marseille monitoring his situation.