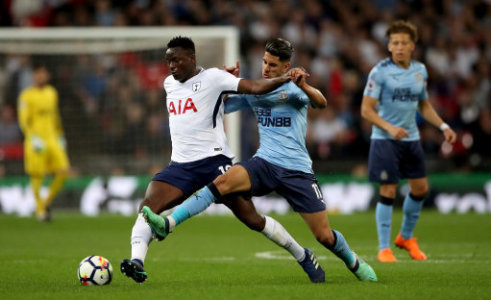 With the new Premier League season set to kick off later this week, Tottenham could potentially be selling a key midfielder if recent reports are to be believed.

Serie A side AS Roma are considering a late move to sign Tottenham midfielder Victor Wanyama, according to the latest reports in the Mirror (via La Repubblica).

They have made some summer acquisitions themselves, including deals to sign PSG’s Javier Pastore, Dinamo Zagreb playmaker Ante Coric and Ajax wonderkid Justin Kluivert. However, they are keen to add more defensive solidity within their midfield – not least as captain Daniele De Rossi is now 35 and Maxime Gonalons had an indifferent first campaign in Italy last term.

Wanyama joined Tottenham for £14m from Southampton two years ago and has made 71 appearances across all competitions since then, establishing himself as a first-team regular.

He sustained a lengthy knee injury last August, which sidelined him for a significant portion of the campaign. Crucially, he is not expected to be fit for their upcoming curtain-raiser against Newcastle either, having felt a “twinge” in the same knee that caused him such discomfort last year.

Roma were eager to pursue Sevilla’s Steven N’Zonzi, but their efforts have reportedly been rebuffed by the player – who is waiting for an approach from Arsenal and former boss Unai Emery.

Wanyama represents a younger, more defensive-minded alternative to the World Cup winner and one that can be acquired for a similar transfer fee too.

A fee in the region of £25-30m could be seen as fair given the circumstances, though Spurs could just totally reject all offers given their current situation with the new campaign just a few days away.

Tottenham themselves are yet to make a summer signing and with the Premier League kicking off this weekend, it’s unlikely that Mauricio Pochettino will want any of his senior players to leave. However, there is a chance that he would let Wanyama depart – provided they are able to sign a replacement before Thursday’s transfer deadline.

Wanyama, 27, was sidelined until early January this year after a lengthy knee injury. His quality in midfield cannot be questioned, though the length of his setback may hint that Pochettino cannot rely on him to replicate his previous best given how the boss likes his teams to play.

Having sold Radja Nainggolan to Inter Milan and first-choice goalkeeper Alisson to Liverpool this summer, they have more than enough money to entice Spurs into a sale – provided the player himself wants to leave.

Although the transfer window for English clubs closes on Thursday, deadline day remains the same across Europe and a deal could be concluded should Wanyama make clear his desire to move to Italy. Tottenham themselves are in a key transition phase as they move into a new stadium and the Argentine does not want any players who are not fully committed to the cause, irrespective of their quality.