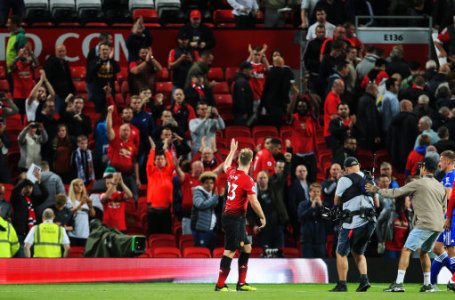 Paul Pogba’s penalty strike and Luke Shaw’s maiden competitive goal were enough to secure all three points in the first game of the new 2018/19 Premier League campaign, although the visitors will feel hard done by after an admirable showing at Old Trafford.

Pogba, United’s captain for the evening, made no mistake from the spot-kick after Daniel Amartey was correctly penalised for an inadvertent handball following Alexis Sánchez’s lofted ball into the box.

Although the Chile international had a discussion with his teammate over who would be taking the resulting penalty, the responsibility was coolly slotted home by the World Cup winner.

Hosts threaten but without finishing touch

Thereafter, United looked dangerous and threatening on the break with Fred, Andreas Pereira and Marcus Rashford all looking to accelerate quickly into the final third. However, they did not score the second shortly afterward and Leicester eventually grabbed a foothold in the game.

Claude Puel’s men, who have been utilising a possession-heavy playing style under his management, looked to control the game despite being a goal behind. A few passes went astray, challenges were flying in but the game’s tempo was still fairly high as the Foxes went in search of an equaliser before the half-time interval.

Kelechi Iheanacho and James Maddison, the latter making his Premier League debut, came closest. Good work from both Ben Chilwell and Demarai Gray saw the ball fed into the Nigerian’s path, though he could only flash a snapshot narrowly wide of David de Gea’s far post.

Maddison, Leicester’s brightest spark, settled quickly and was composed in possession. If not for a good reaction stop by the Spaniard, he would’ve equalised after being teed up just inside the box. 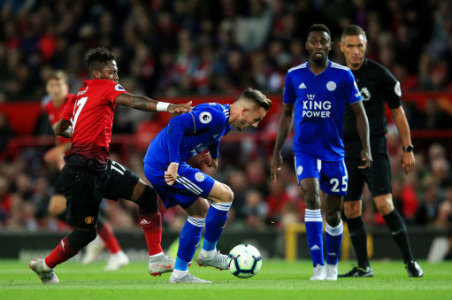 Maddison (centre) was Leicester’s brightest spark throughout and regularly came out on top during his tussles with United’s Fred in midfield. (Picture source: PA Images)

It was clear though that Juan Mata was being overrun down the United right-hand side and Mourinho made tactical changes to ensure Leicester’s attacking down the flank would not pose as many problems after the break. Shortly after the interval, Amartey was booked for a cynical foul on Alexis as neither side made any changes. That wouldn’t last long, though.

Soon after, Fred also found himself in the referee’s book for similar cynicism in his attempted challenges on Maddison – who was far from happy with the Brazilian’s abrasive style. Matteo Darmian elected to shoot from range and test Schmeichel with a low strike, before Adrien Silva replicated the same up the other end.

Puel opts for double change in search of response

Puel knew that he needed to change something, so it was time for a double sub shortly after the hour mark. Jamie Vardy, fresh from signing a new four-year deal at the King Power, came on alongside new acquisition Rachid Ghezzal – who they signed from AS Monaco for £10m.

Surprisingly, Maddison was to make way for the Algeria international while Amartey, already on a booking, also headed for the bench. It was an attacking change and one that could’ve paid off, on another day.

Instead United should have had a more comfortable lead, as Mata came close but could only watch his deflected effort flash wide of Schmeichel’s far post. Marcus Rashford, whose evening consisted of indecisiveness and a frustrating tendency to isolate himself at times, was replaced by Romelu Lukaku with just over 20 minutes to play.

Two excellent saves in quick succession ensured the score remained finely poised at 1-0. First, de Gea made an excellent fingertip stop to deny Gray’s close-range flick – before Lukaku was thwarted by Schmeichel at the other end, who somehow managed to send the Belgian’s effort looping onto the top of the net.

Time continued to tick by and Luke Shaw, who had already come close to scoring with a stinging effort in the first-half, made no mistake with a tidy finish to double United’s lead after 83 minutes. His first senior goal and at an important time too, he benefited from Mata’s probing pass before skipping past Ricardo Pereira and poking home from a tight angle to leave Schmeichel helpless. 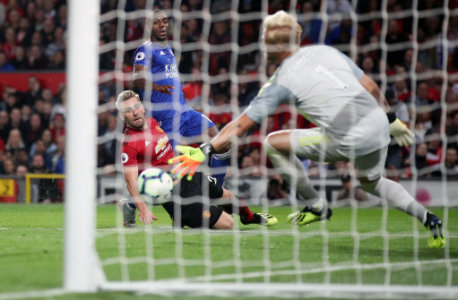 Pogba was replaced by the equally imposing figure of Marouane Fellaini as Mourinho looked to cement United’s 2-0 victory – but it was far from comfortable viewing with stoppage-time lurking.

Four minutes were added on and the hosts were fortunate not to see their two-goal cushion evaporate. First, Pereira’s excellent delivery into the box found an unmarked Vardy with the goal gaping at his mercy. He fired a volley over the crossbar. Just a minute afterwards, he made amends with some help from the woodwork after Pereira replicated his teasing cross, it hit the crossbar and fell into the England international’s path to finish. 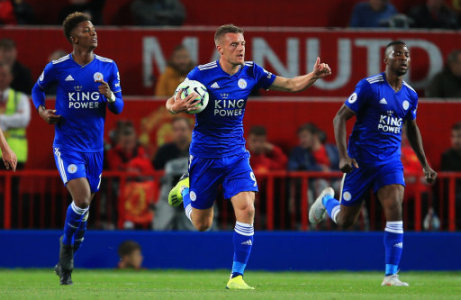 Too little, too late: Vardy (centre) wheels away with ball in hand after halving United’s deficit. (Picture source: PA Images)

Cue panic stations. Having relinquished similar leads before, not least against Leicester last season, United were keen to avoid missing out on two points here – though a corner was conceded after Alexis gave up possession and the visitors broke quickly. Schmeichel came up for the set-piece, the game’s final kick, headed goalwards but soon afterwards reacted angrily as his header trickled wide and into the advertising hoardings.

This was always going to be an intriguing watch, one where United were favourites regardless of Mourinho’s summer moaning – where an unlikely but inspired source helped to secure all three points.

United have a habit of winning games without being particularly comfortable and the same was present here. A lot of their key first-team players have only recently returned from post World Cup holidays, captain Pogba and Lukaku included. Brighton (away) and an unpredictable Tottenham side at home to finish this month’s league fixtures, could be worse.

Leicester fashioned chances of their own too and if not for de Gea, could’ve snatched a decent result from this game. It’ll be back to the drawing board for Puel and his side, having performed admirably after conceding so early from the penalty spot. The visitors play against newly-promoted Wolves at home and Southampton away to end the month of August.