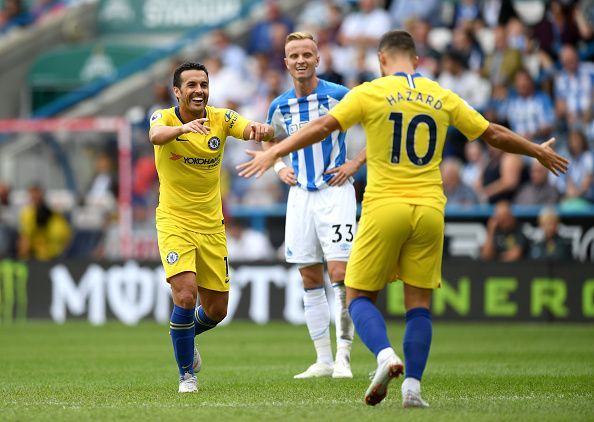 Chelsea began Premier League life under Maurizio Sarri with a morale-boosting away victory at the John Smith Stadium against a Huddersfield side who looked encouraging at times, but seemingly helpless to stop the Blues’ wave of attacks once they grew in confidence.

Goals from N’Golo Kanté, Jorginho from the penalty spot and a late Pedro finish ensured all three points for the visitors – though they could count themselves fortunate to hold a two-goal advantage going into the half-time interval.

Alex Pritchard was a dangerous creative force in the final third, Steve Mounié came close on three occasions and hit the post with a close-range header just minutes after Kanté opened the scoring. Then, on the stroke of half-time, Marcos Alonso was hauled down inside the box and Jorginho made no mistake from twelve yards out.

Pedro added the icing on the cake with 10 minutes left, having been teed up by Eden Hazard – who came on as a substitute and immediately went about tormenting Huddersfield defenders. Here are five players who experienced contrasting fortunes during this affair: 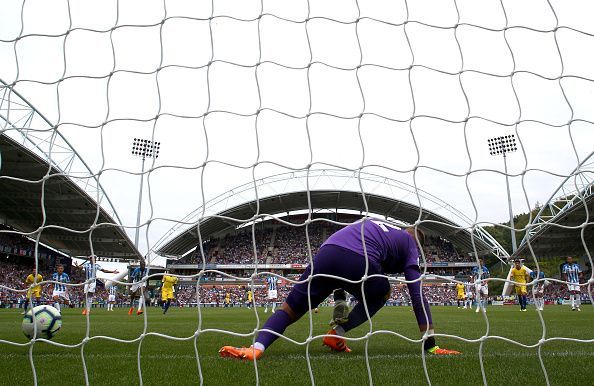 Hamer was made to look silly on multiple occasions

It was a bold decision to start the Englishman over first-chance Jonas Lossl and one that ultimately didn’t pay off for the host here. His distribution was inaccurate, he failed to command his area particularly well nor provide the backline with much confidence behind them.

Kante’s goal, although not easy on the eye, swerved awkwardly toward the far corner. It was not hit with much venom but given his starting position, the ball’s trajectory deceived him and he could only watch helplessly.

As for Jorginho’s spot-kick, he was made to look silly. The Italy international waited for him to move to one side, faking to strike before sliding it across the opposite corner while he was essentially on his knees.

Pedro applied the finishing touch after Hazard accelerated forward with purpose before unselfishly teeing up the Spaniard, who was cool and collected before lifting the ball over the onrushing Hamer, watching it trickle into the corner. 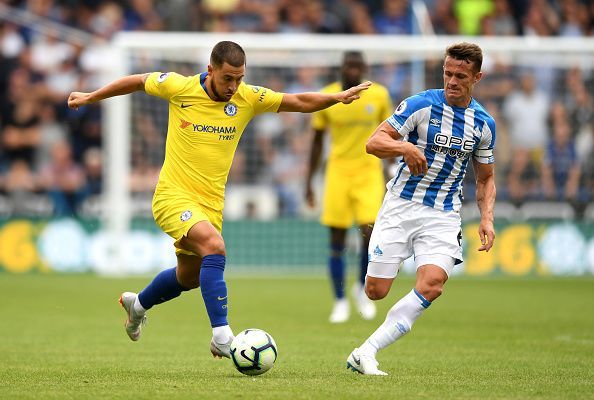 Hazard on one of his trademark slaloming runs

Although he only played the final 15 minutes here, Hazard’s contribution was too significant to ignore in this list. The 27-year-old, who returned to full training earlier this week, was dreaming of a Real Madrid move and it’s difficult to gauge how wantaway players like him feel after their public wishes are not granted.

However, he performed like a man on a mission and his presence gave Huddersfield players an unwelcome sight as their legs were already beginning to tire – he just stretched them further.

He completed six dribbles, more than any other outfield player throughout while being fouled unceremoniously by fullback Terence Kongolo as he raced towards the area. His unselfish nature was on display again too, as he skipped past a couple of challenges before teeing up Pedro to make Chelsea’s lead an unassailable one with ten minutes left.

That was his 76th assist in appearance 301 for Chelsea, and supporters will be hoping for many more to come. 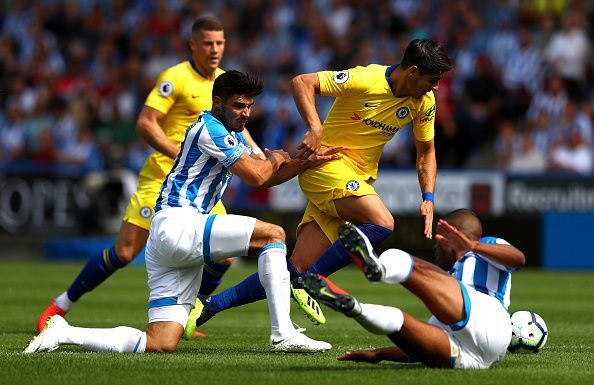 Schindler had a poor game, which was punctuated by his needless foul on Alonso in the area.

With the Spaniard already shaping to shoot, he should have instead remained on his feet in an attempt to block or deflect the forthcoming effort, rather than sliding in recklessly and running the risk of conceding a spot-kick.

The referee had no choice but to point to the spot, from which Jorginho scored and you sense the two team-talks would have been dramatically changed following his challenge. Huddersfield were still in with a chance at just a goal behind, but 2-0 down against a side of Chelsea’s quality, even at home on the opening weekend of the season, is a tough ask. 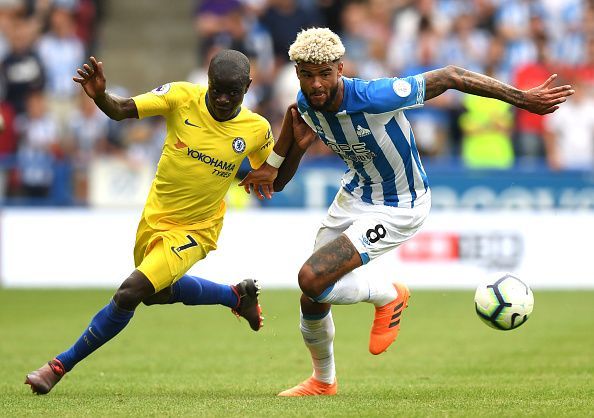 Billing was tenacious in the tackle, energetic and came close to scoring too

Alongside Aaron Mooy and Terence Kongolo, the Danish midfielder was Huddersfield’s best performer during a frustrating showing for the hosts.

Fouled as and when he advanced toward attacking areas, his pass accuracy was at an eye-catching 89% and he completed the joint-highest tackles (6) with his Australian midfield teammate.

Two interceptions, a clearance and blocked shot, his deliveries into the box were inviting early on and he too went close with efforts on goal of his own. All in all, it was an energetic and encouraging display from the 22-year-old who embraced Chelsea’s quality and relished the challenge. 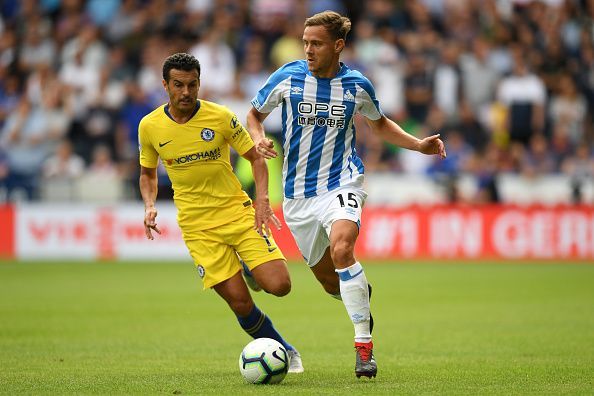 Pedro in pursuit of possession during Chelsea’s 3-0 win

While Álvaro Morata struggled, Pedro thrived and was key to Chelsea’s comfortable victory here. He combined well with Cesar Azpilicueta down the right on numerous occasions, displayed plenty of relentless energy and worked tirelessly out of possession to make it uncomfortable when Huddersfield looked to play out from the defence.

It was his driving run forward that proved pivotal in the build-up to Kanté’s strike before half-time, while he displayed composure to finish the way he did for their third goal.

His decision-making has been called into question at times, but if he’s able to sustain this level of performance on a consistent basis, then his place in the starting eleven will continue to solidify and provide Sarri with another selection headache moving forward.