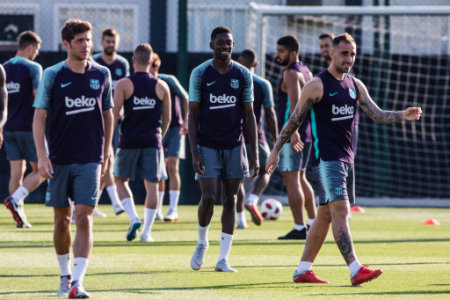 According to recent reports, Paris Saint-Germain are still prepared to make a big-money surprise signing from another top European side before the August 31 deadline…

Despite the Premier League transfer window shutting earlier this week, Ousmane Dembélé could still be set for another big-money switch after all. According to reports in both Spain (Mundo Deportivo) and England (talkSPORT and Daily Mail), the 21-year-old winger may be tempted to reunite with former boss Thomas Tuchel at Paris Saint-Germain this summer.

Barcelona are heavily reluctant to sell the player, given his high potential and current ability – not to mention selling to a European rival would be seen as another backward step in their attempts to win the UEFA Champions League once more this upcoming campaign. However, they are also prepared to consider selling him if the right offer is made.

Dembélé scored four and created eight assists in 23 appearances for Barcelona during a stop-start debut campaign in Spain last year.

In contrast, he netted 10 goals and created 22 assists in 50 appearances (all comps) during a successful year-long spell with Bundesliga side Borussia Dortmund in the 2016/17 campaign.

He has made 49 appearances under Tuchel in his playing career and is publicly full of praise for the German, who helped nurture the France international’s talent at a crucial stage in his progression.

Arsenal and Manchester United, among other European sides, were heavily linked with the World Cup winner’s signature in recent months. Now that neither can sign him, at least for now, attention has turned towards other interested parties – Paris Saint-Germain are confident they can convince him to join them between now and the month’s end.

Tuchel himself is a long-term admirer of the 21-year-old and would be thrilled to have the opportunity to coach him once more, not least in a star-studded side which includes compatriot and friend Mbappé on the opposite flank.

Barcelona boss Ernesto Valverde, who too is an admirer of Dembélé, has revealed he doesn’t know whether he’s received offers to leave the club this summer – but still hopes he’ll remain, regardless.

PSG are said to have already repeatedly contacted the player’s agent, hoping that they can gauge his level of interest before moving further with a strategy for their proposed move.

The various sources mentioned in this report are fairly reliable and it’s unlikely this story developed from pure speculation. Barcelona themselves are reluctant to sell the player, but with that in mind, it’s unlikely they will stand in his way if he does make clear his desire to leave.

This deal could happen, but with given PSG’s issues with Financial Fair Play (FFP) in recent months, they’d have to offer Barca a high fee after an initial loan deal for instance, like they did to sign Kylian Mbappé from Monaco twelve months ago.

With just over two-and-a-half weeks left before the August 31 deadline for French clubs, it’ll be interesting to see how they approach this deal – though it’s clear that the Ligue 1 champions are genuinely interested in completing a transfer.

Ultimately, every player has their price. Dembélé displayed flashes of his individual brilliance last term but sustained troublesome muscular injuries and Tuchel’s presence at the helm could act as an effective way of persuading him to return to France.