According to recent reports, Serie A champions Juventus have rejected a €60m (£53.6m) bid from PSG for highly-rated fullback Alex Sandro. Are they prepared to return with an improved offer?

In a report we covered last month, PSG made clear their interest in signing Juventus fullback Alex Sandro at some stage this summer. Whether or not they could agree a deal, was down to deciding a fair transfer fee as well as gauging the player’s personal interest in moving to Paris.

According to reports from La Gazzetta dello Sport as well as Sky Sport Italia, the Ligue 1 champions have now had a €60m (£53.6m) bid rejected.

PSG were not the only club interested in signing Sandro this summer. Manchester United were said to have already agreed personal terms with the player himself, yet failed to agree a transfer fee with Juventus for his services.

At 27, he still has plenty of years at the highest level left and market values for fullbacks has rapidly increased in recent seasons too as managers’ playing styles often focus on the effectiveness of them going forward. Sandro in particular, alongside Manchester City’s Benjamin Mendy, thrives in the final third.

Although they are reluctant to let him leave, Juventus appear prepared to replace Sandro – should he make clear his desire to depart in the coming days. They know that he’s a wanted talent though and with that in mind, they are content in seeing how much sides like PSG are willing to pay for him, as every player has their price after all.

Real Madrid left-back Marcelo, who himself has been at the Bernabeú for 11-and-a-half years, is reportedly being lined up as a potential option to sign for the Bianconeri. The potential move is made even more possible given his long-time teammate, Cristiano Ronaldo, shocked many by sealing a €100m move to Turin last month. 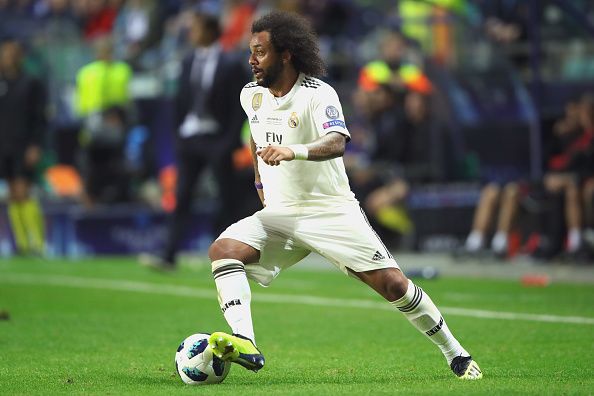 Juventus are reportedly interested in Real’s Marcelo as a potential replacement for Sandro, should his compatriot leave this summer

However, a deal for the 30-year-old would have to be concluded before the Serie A deadline, which is today at 7pm UK time (6pm GMT).

News sources aplenty have begun covering this story in recent days, increasing the likelihood they’ve had a bid rejected. Time is running out for PSG if their interest in Sandro is as serious as being reported.

PSG need to act quickly and make another bid, should they still want to sign Sandro before the month is over. Having just spent €37m (£33m) on Schalke defender Thilo Kehrer, it’s obvious Thomas Tuchel and his coaching staff are focused on improving their squad’s defensive side, given the club’s shortcomings against top opposition in years gone by.

Whether they’ll be prepared to splash out more on a left-back who will be in direct competition with Layvin Kurzawa for a starting berth, remains to be seen. Time will tell.